Having regard to Council Regulation (EEC) No 2913/92 of 12 October 1992 establishing the Community Customs Code (1), and in particular Article 249 thereof,

Whereas, in order to ensure equality of treatment for the persons concerned, it is desirable to make it clear that under Commission Regulation (EEC) No 2454/93 (2), as last amended by Regulation (EC) No 1500/94 (3), goods may in some cases be released for free circulation, following temporary storage, using the local clearance procedure; whereas a clear distinction should be made between the various possible situations; whereas the obligations entailed by the local clearance procedure should be matched to those situations;

Whereas Regulation (EEC) No 2454/93 contains provisions concerning the stamp and the destination of the various sheets of the consignment note CIM for goods imported from third countries by rail;

Whereas it is desirable to amend these provisions to cover the case where such goods are placed under a customs procedure in the course of their journey and forwarded to the Member State of destination under the cover of the original consignment note CIM;

Whereas it is desirable to specify the means of identification provided for under the inward processing procedure and to provide expressly for a documentary check as a means of verifying that the compensating products have been obtained from the import goods;

Whereas Community inward processing rules have been conceived in such a way as to decentralize, as far as possible, the different aspects relating to the arrangements; whereas they provide inter alia that an authorization may be issued only where the essential interests of Community producers are not adversely affected (the economic conditions); whereas the rules further provide a number of specific situations where the economic conditions are considered to be satisfied; whereas, in certain circumstances, although the economic conditions may be considered by the customs authorities with which the application was lodged to be formally satisfied, use of the procedure could nevertheless in practice adversely affect the competitive position of Community producers;

Whereas provisions should be adopted ensuring compliance with the economic conditions in cases where an application has been submitted for inward processing operations, in such a way that an equitable balance can be struck between the interests of the Community producers and those of the processors concerned; whereas a mandatory consultation procedure should be established for this purpose;

Whereas, in order to facilitate access to the procedure, it is desirable to raise the value limits under which the economic conditions can be considered to be satisfied; whereas it is also desirable to amend Annex 75 to Regulation (EEC) No 2454/93 by taking into account the degree of sensitivity of economic sectors;

Whereas, for economic reasons, it is desirable to insert specific provisions concerning inward processing operations in the sector of pasta products;

Whereas, in the interests of verification and in order to take full advantage of the Single Market for inward processing operations using a single authorization provided for in Article 556 (2) of Regulation (EEC) No 2454/93, provision should be made for a document to be used for operations in which the import goods are imported before export of the compensating products obtained from the equivalent goods;

Whereas it should be made clear, however, that use of such information sheet will be compulsory only where no other satisfactory verification arrangements have been jointly agreed by the authorities concerned prior to the issuing of the authorization;

Whereas it is desirable to specify the intervals at which the economic conditions must be reviewed;

Whereas the rules currently in force provide that import goods and compensating products which are subject to the inward processing procedure qualify for relief under the end-use arrangements;

Whereas the nature of the goods or products in the civil aviation sector placed under the inward processing procedure, the number of consignments involved, the substantial simplifications under other import procedures and economic reasons resulting from international competition in this sector make it necessary to reduce the administrative costs incurred by Community traders using the inward processing procedure, whilst ensuring that simplification does not give rise to abuses or irregularities;

Whereas, for practical reasons, discharge of the inward processing procedure should therefore be simplified, subject to certain conditions;

Whereas, in this respect, provision may be made for the inward processing procedure to be considered discharged once the goods or products concerned have been used for the first time, on condition that the records kept by the holder for commercial purposes permit reliable verification of the application and correct operation of the procedure;

Whereas account should be taken of the fact that traders in this sector generally keep commercial records which enable goods placed under the procedure to be matched with the products which discharge it;

Whereas it is necessary that Community goods exported directly from the customs territory through a free zone are systematically presented and declared for export, in order to prevent the evasion of export verification measures on sensitive goods;

Whereas the provisions governing the export of Community goods should apply to goods exported through a free zone;

Whereas systematic declaration and presentation is not necessary for non-Community goods which are not unloaded or which are transhipped in a free zone;

Whereas the postponement of the mandatory use of box 26 of the Single Administrative Document (SAD) until 1 January 1996 would enable Member States to introduce that measure in a more satisfactory way, in particular taking into account the need to adapt customs data processing systems;

Whereas the use of box 26 should remain optional for transit purposes, for entry for the customs warehousing procedure and for re-exportation of goods from a customs warehouse;

Whereas it is desirable, for practical reasons, to change the models of the application for authorization and of the use of the inward processing procedure;

Whereas certain standard rates of yield should be adapted as a result of technical improvements in order to align them with the coefficients used to calculate export refunds when similar Community goods are processed;

Whereas Regulation (EEC) No 2454/93 establishes the list of goods which may be placed under the procedure for processing under customs control; whereas for economic reasons it appears appropriate to add a point 14 to the list contained in Annex 87;

This Regulation shall enter into force on the seventh day following that of its publication in the Official Journal of the European Communities. 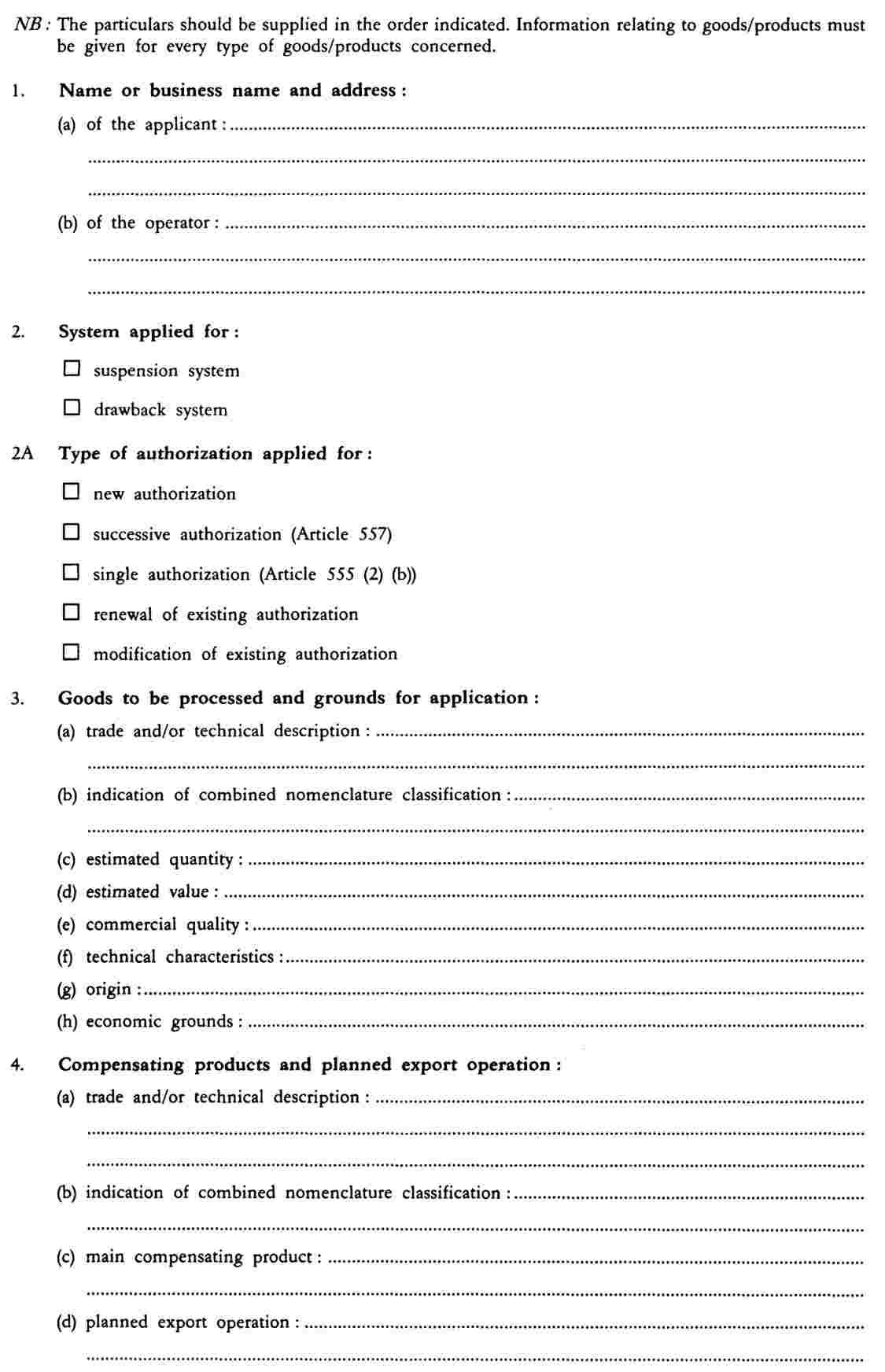 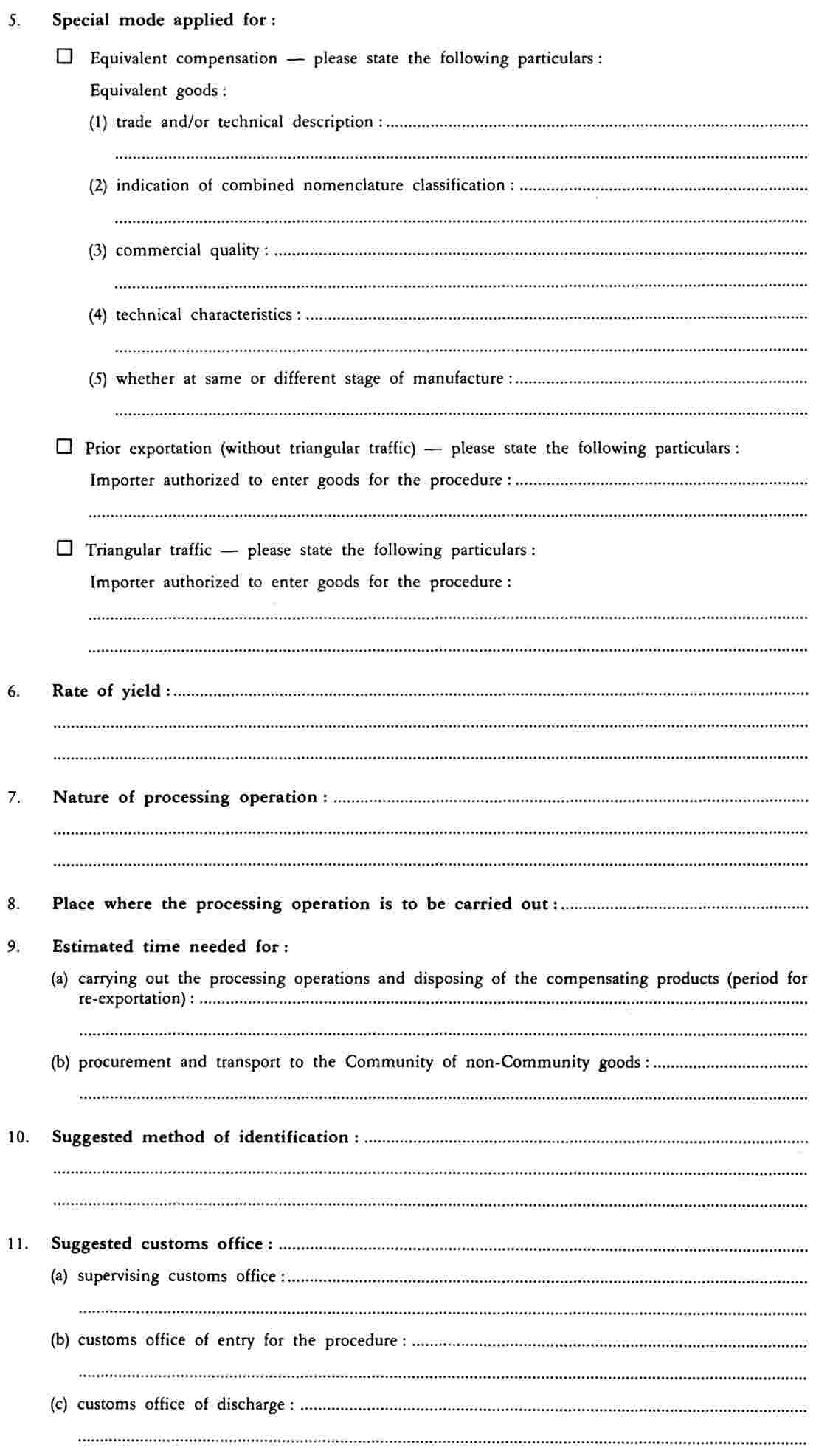 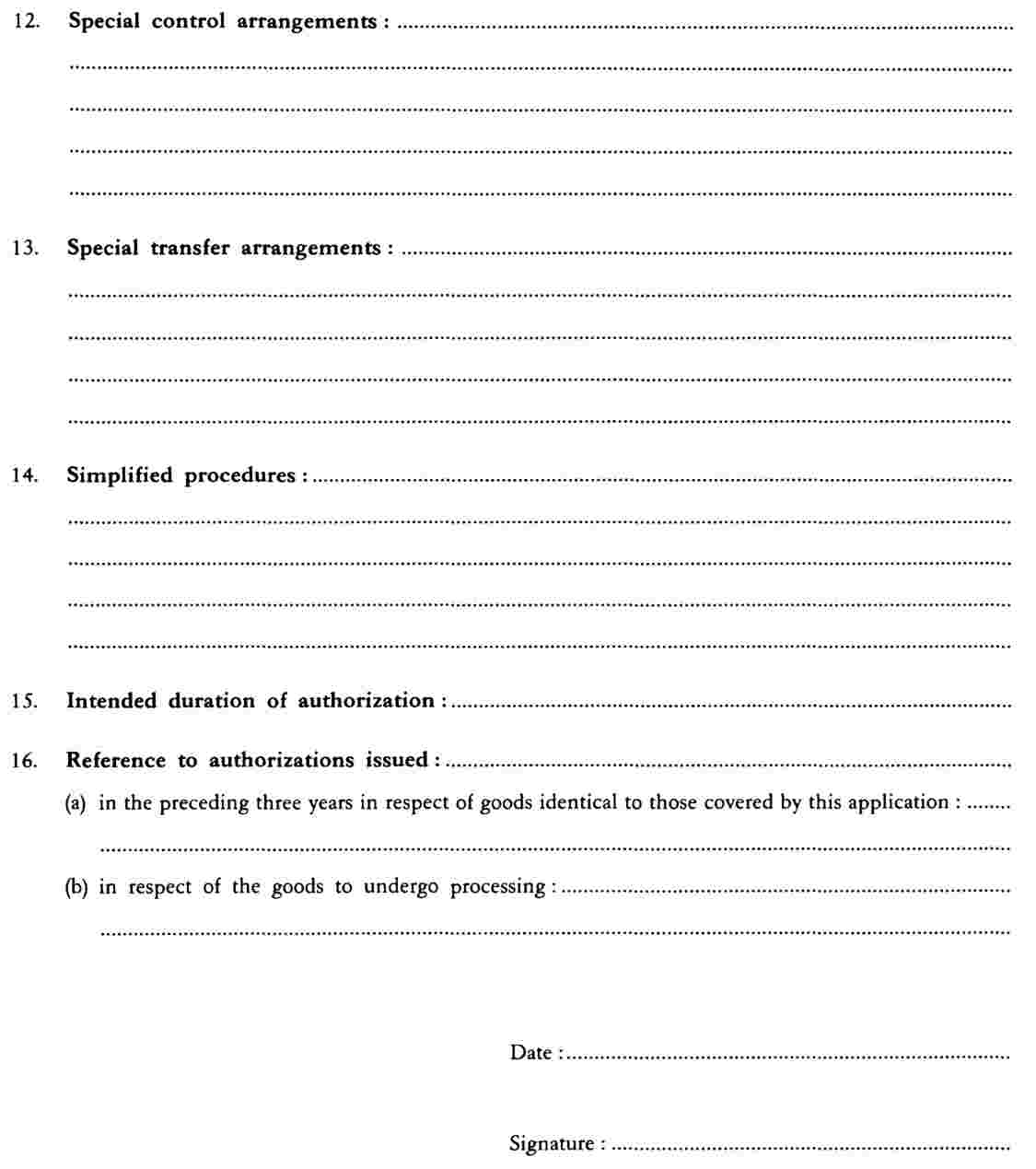 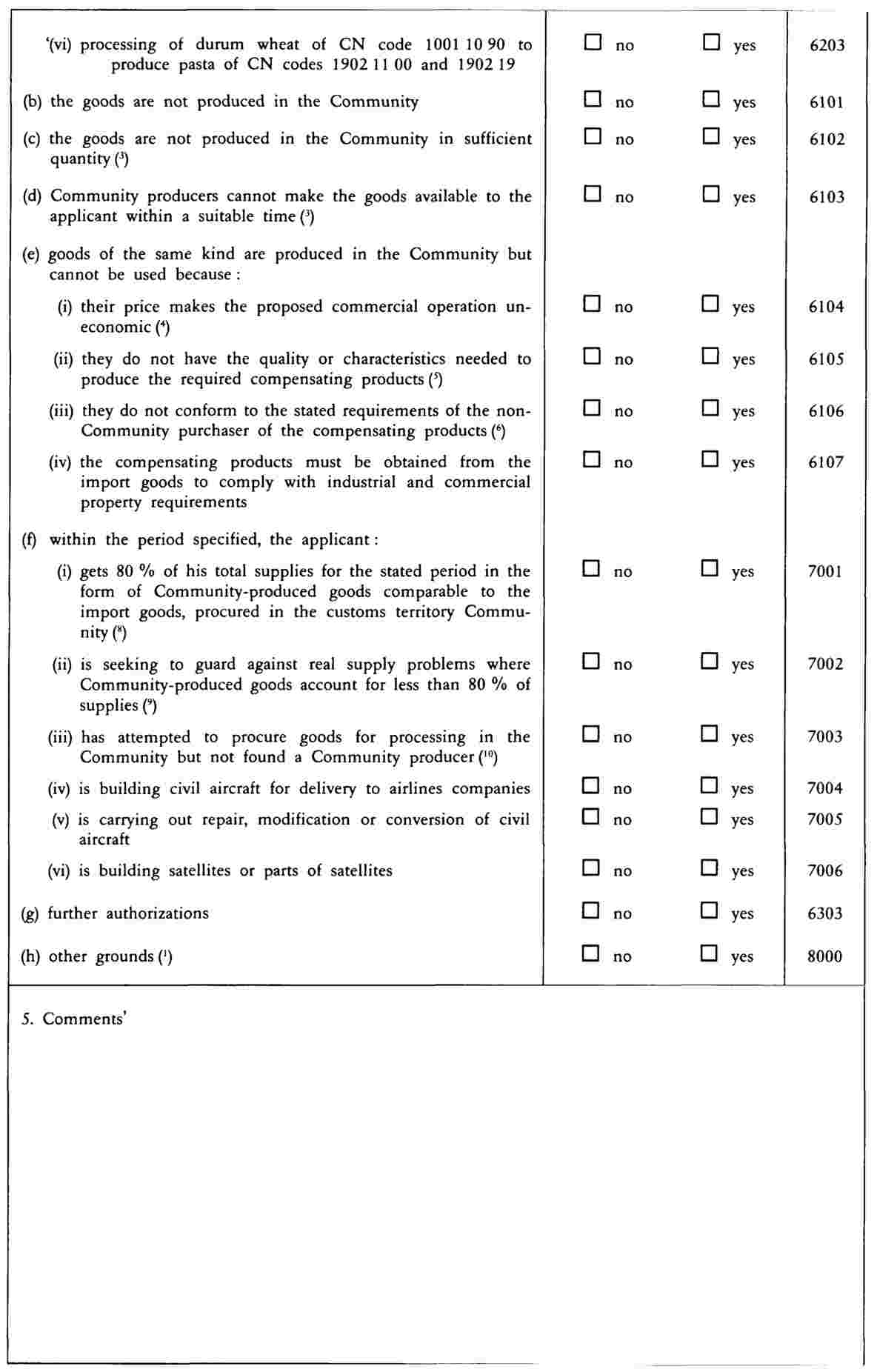 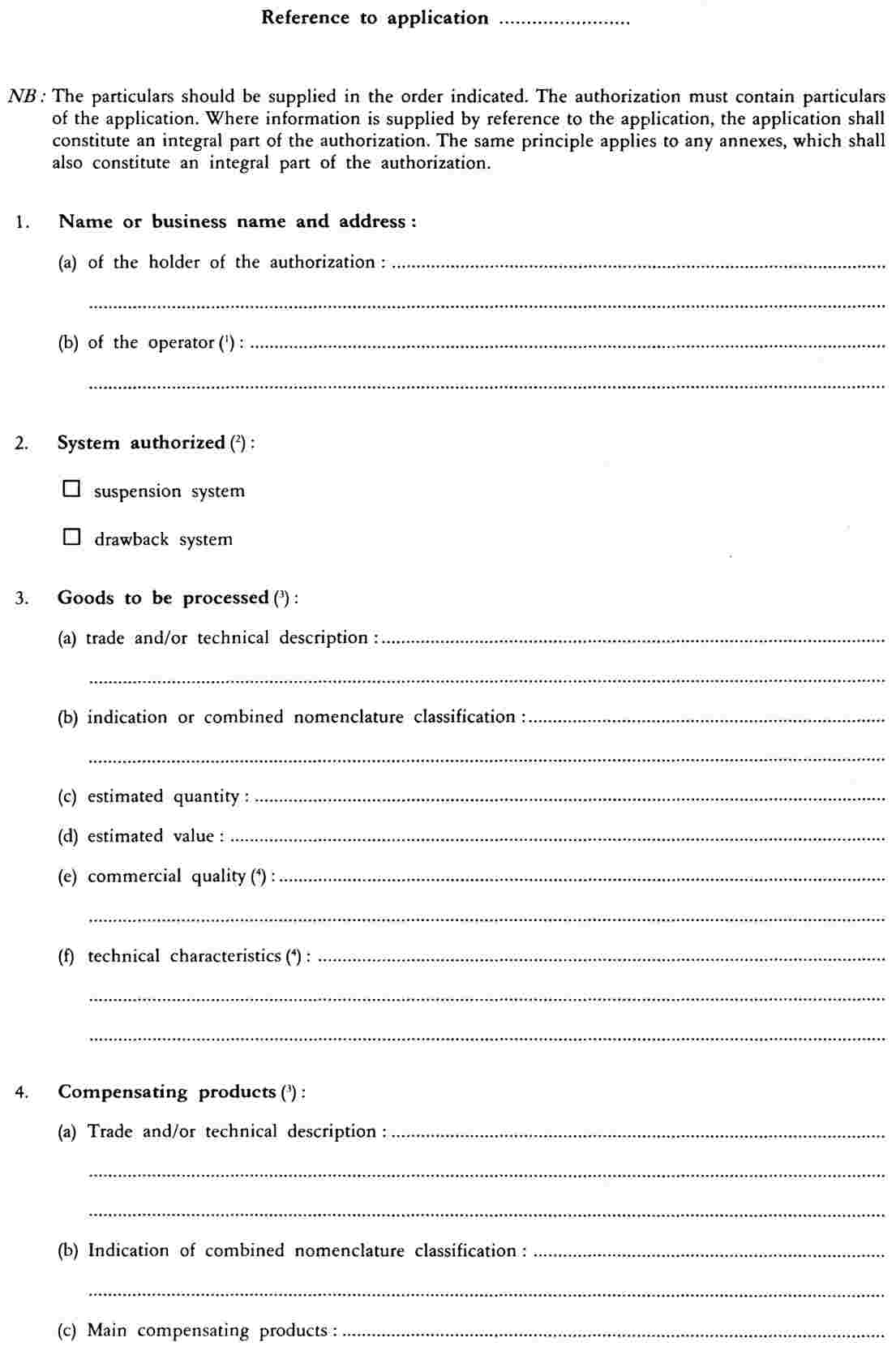 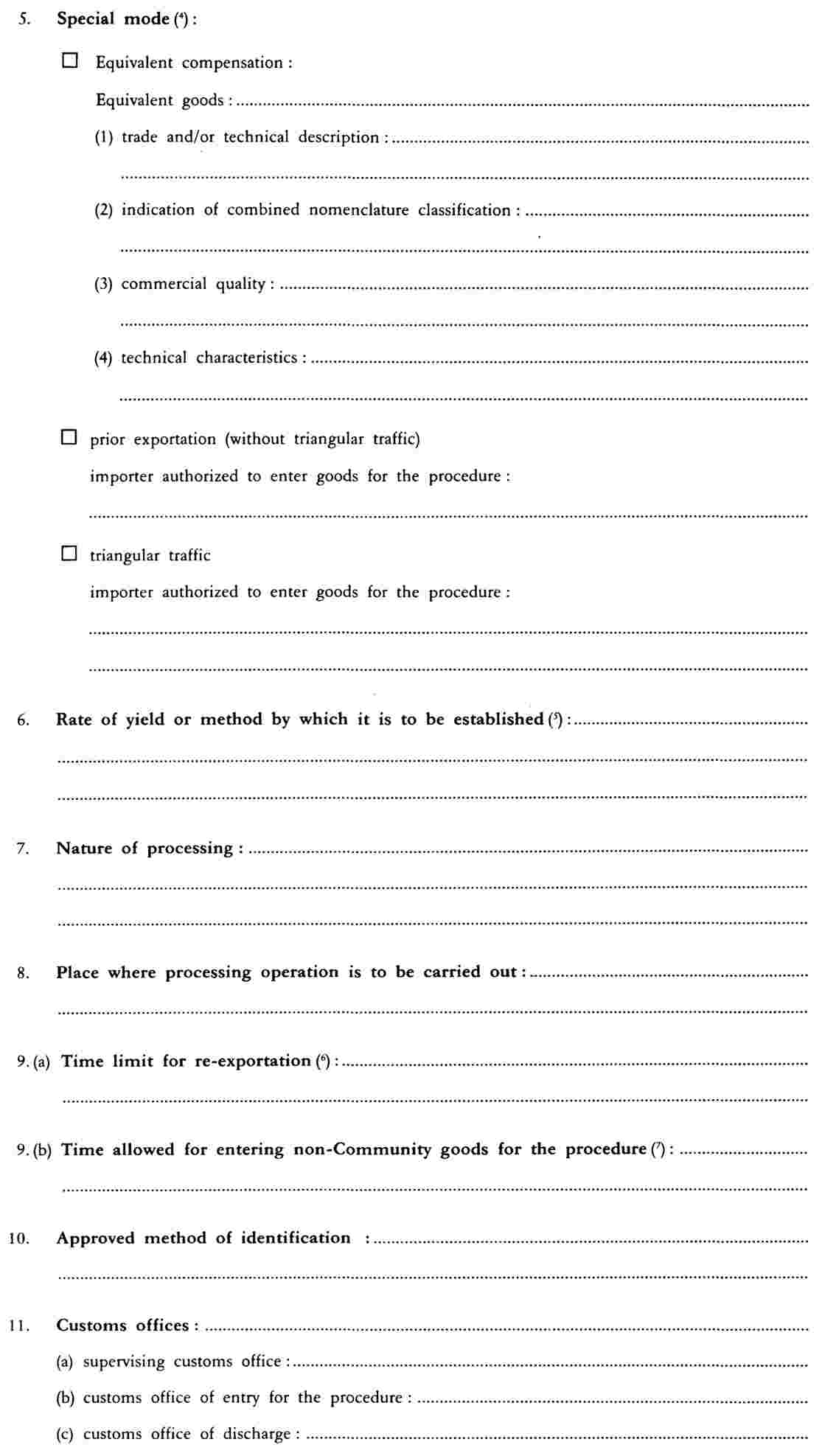 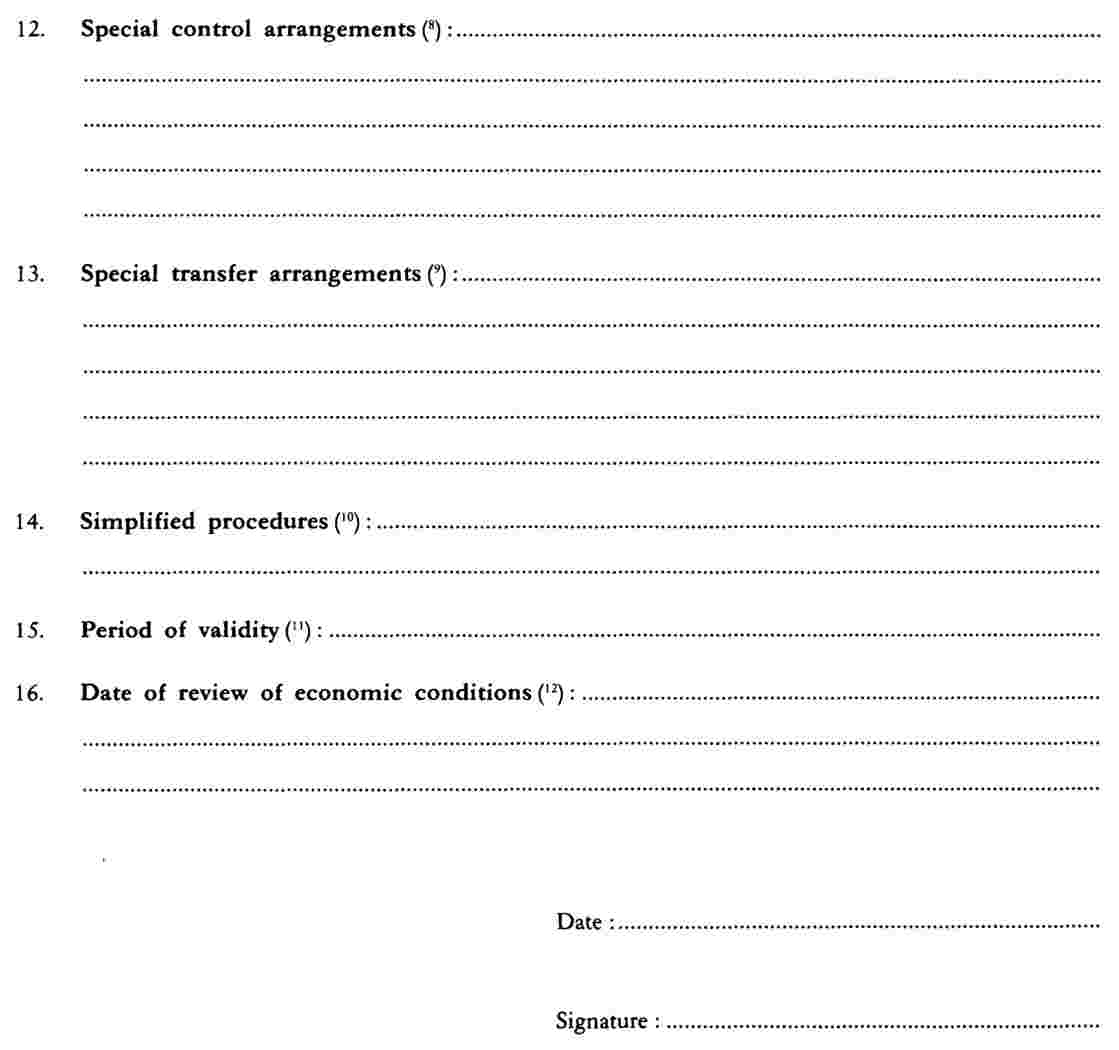 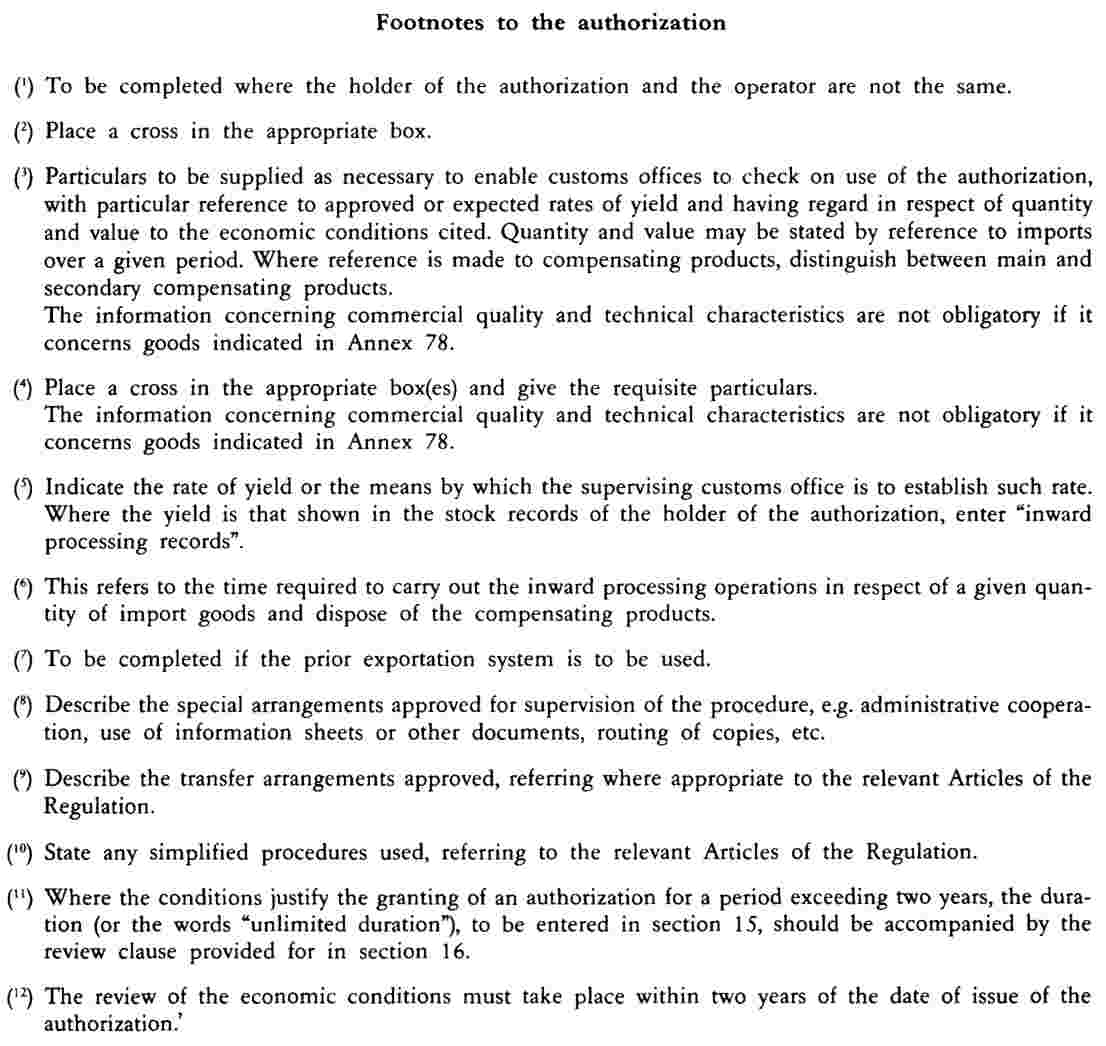 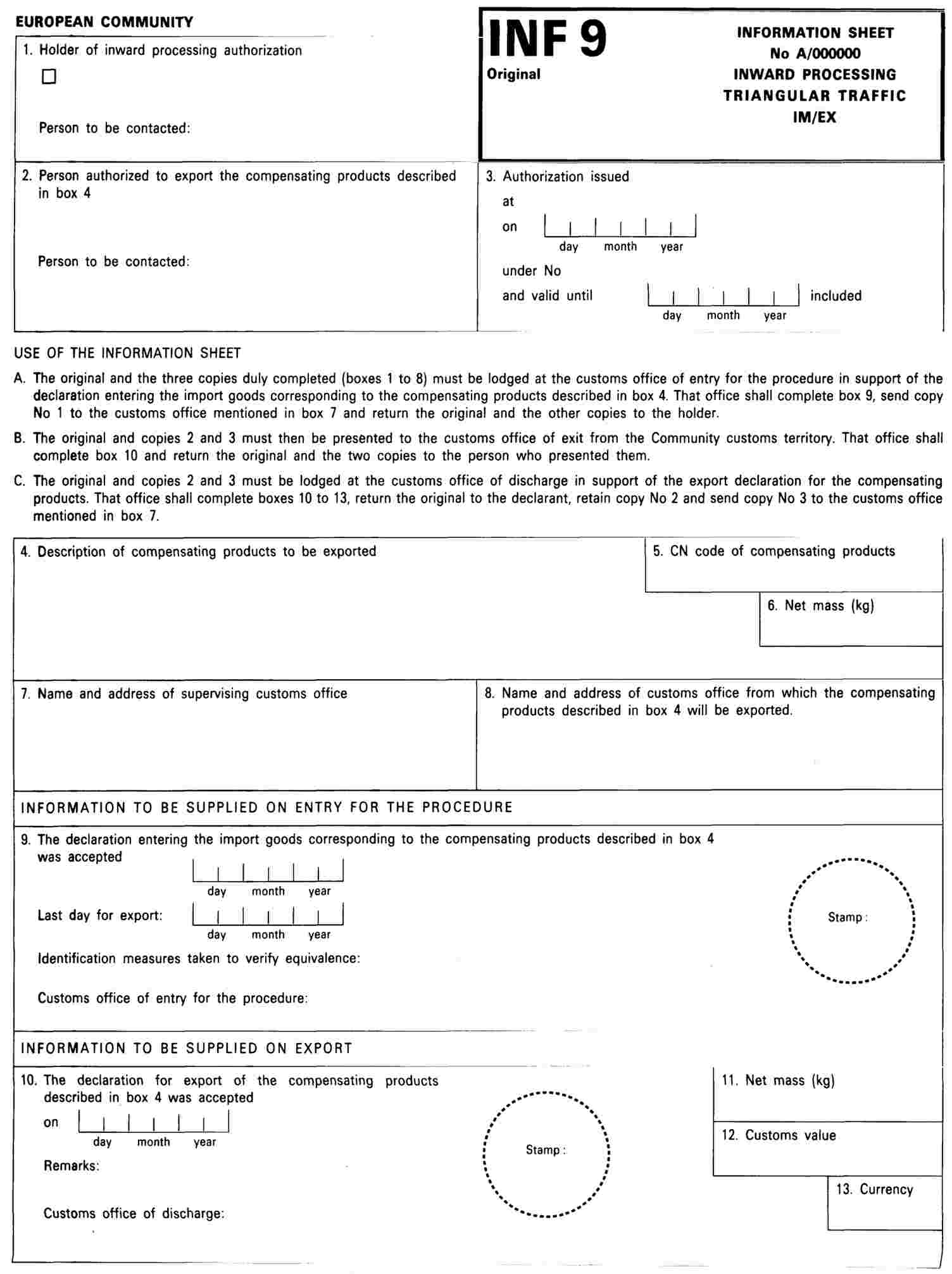 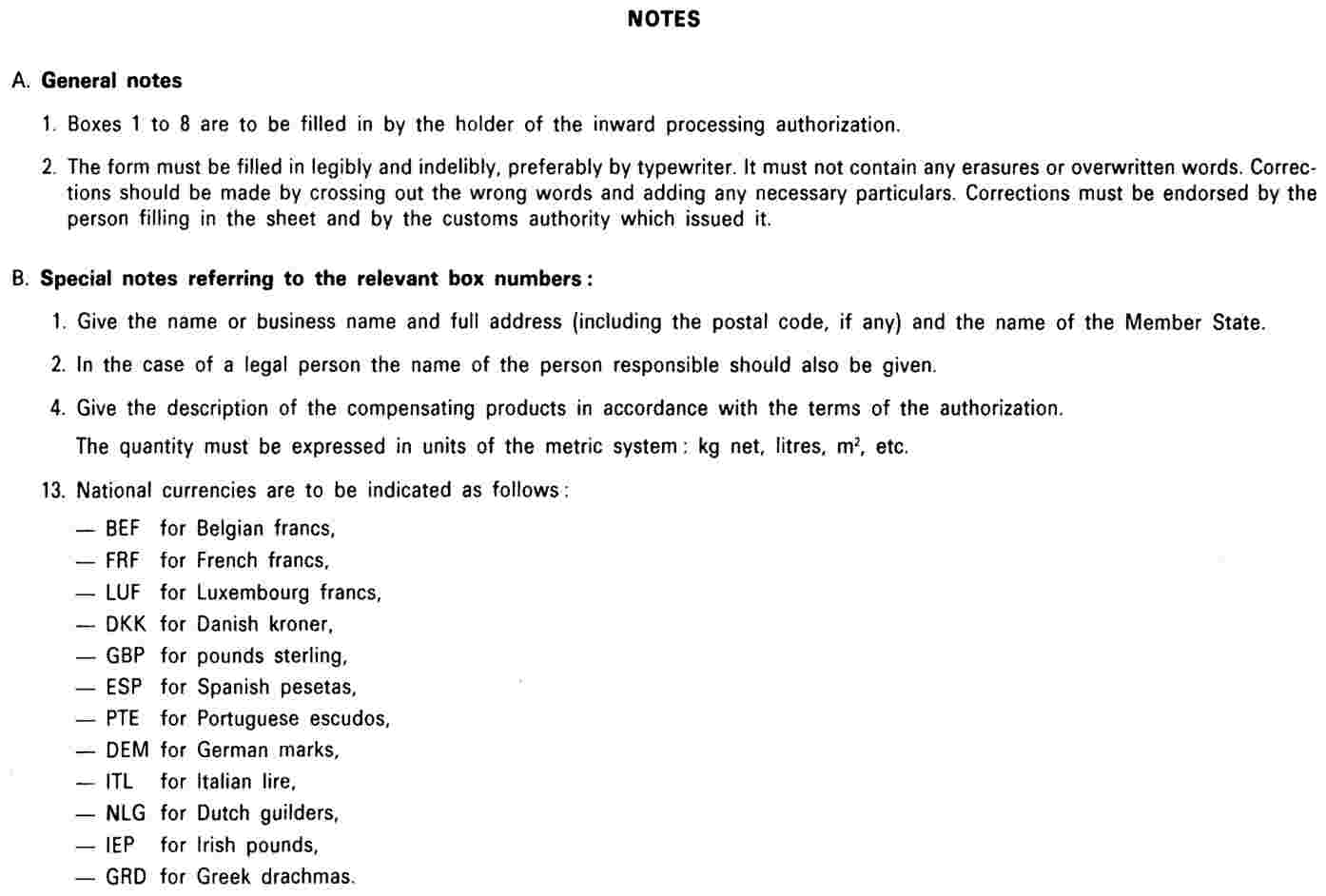 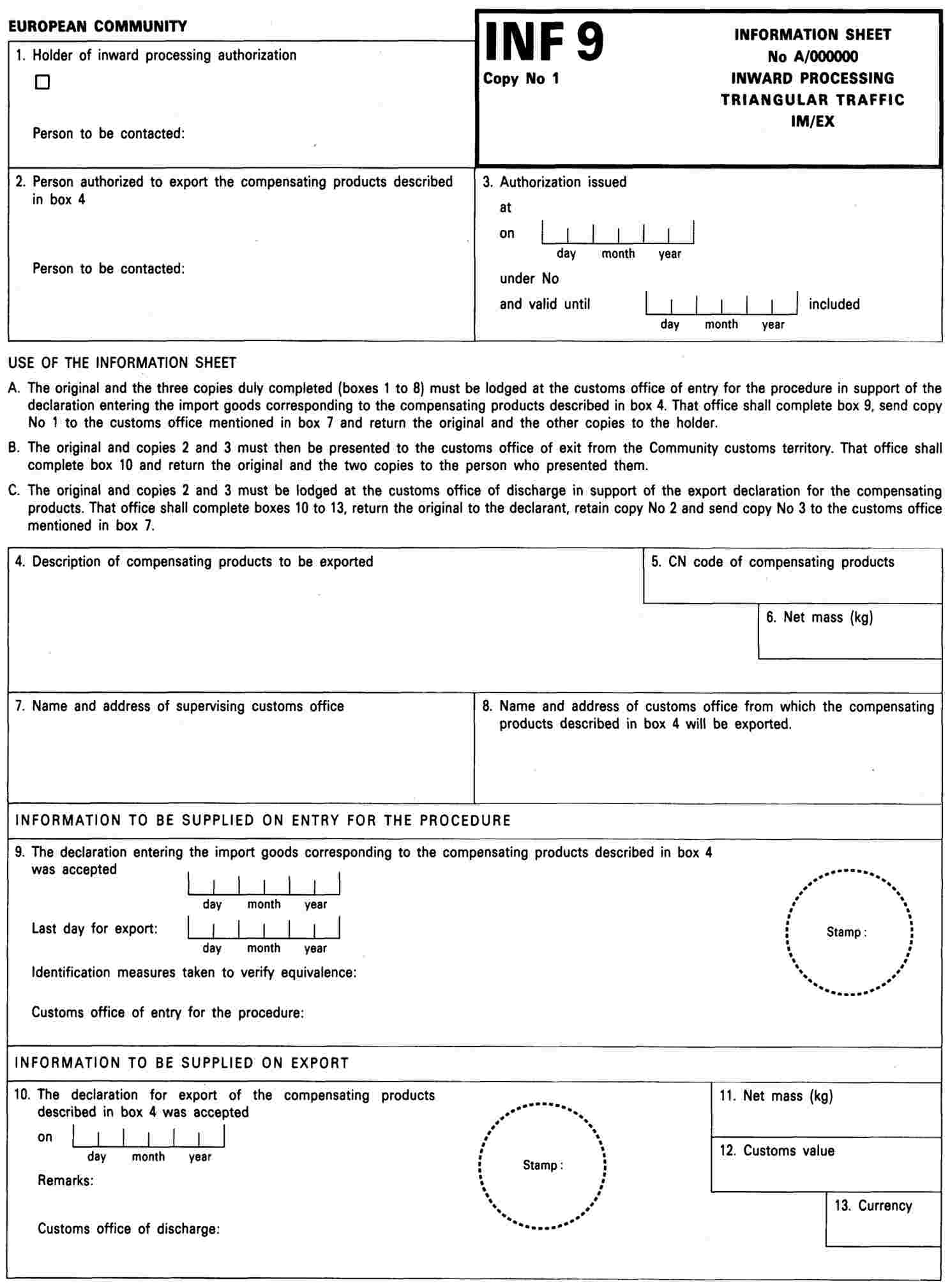 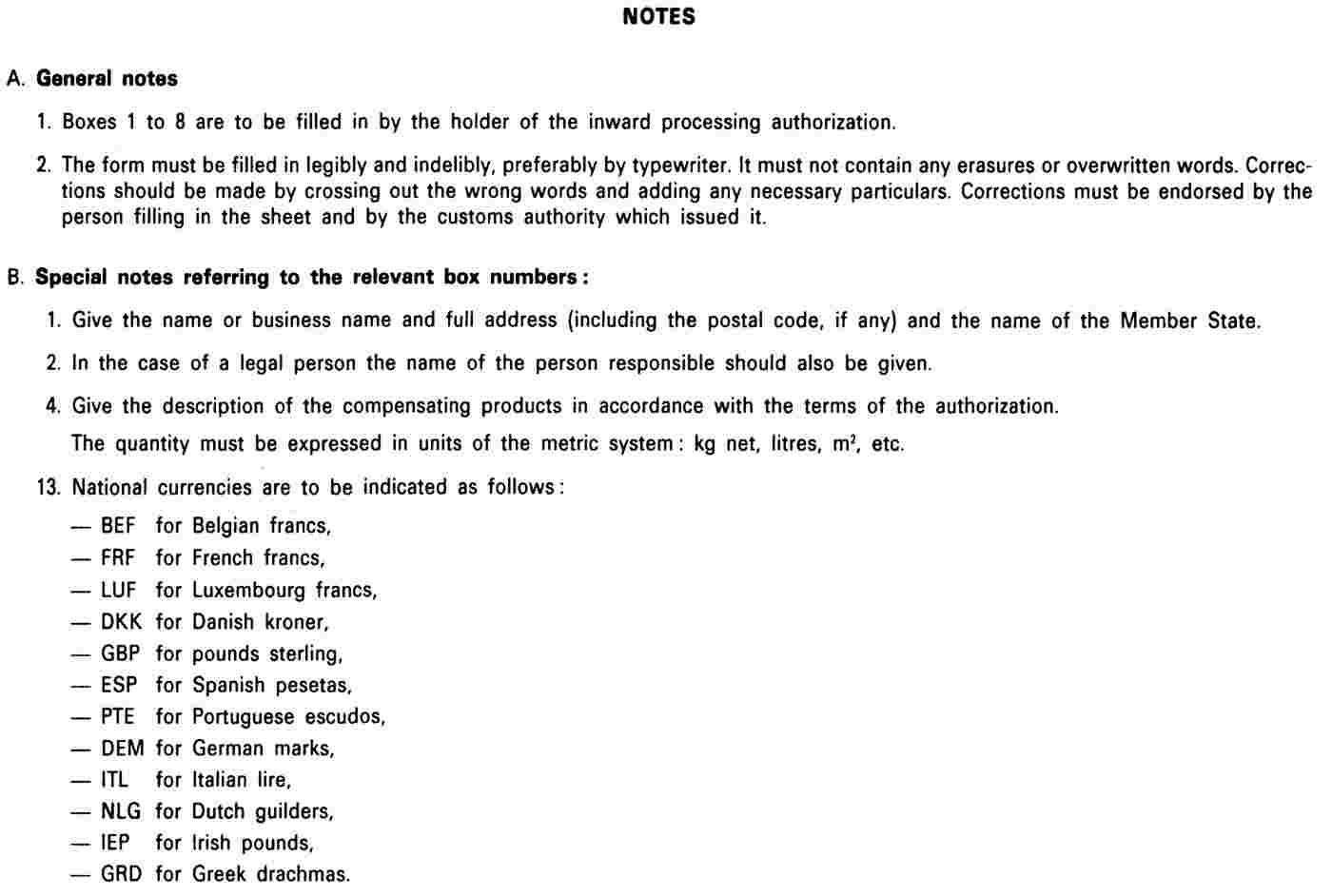 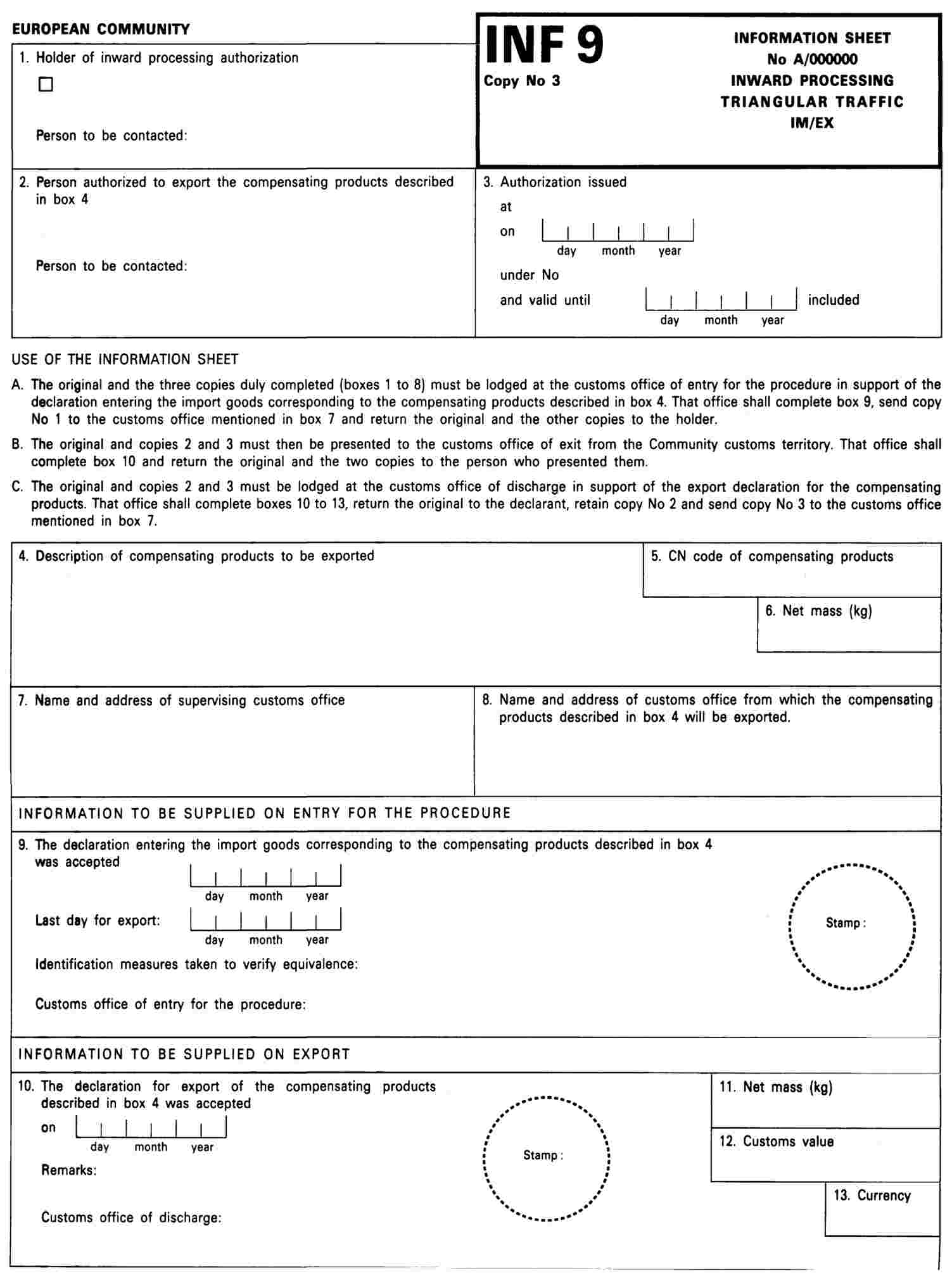 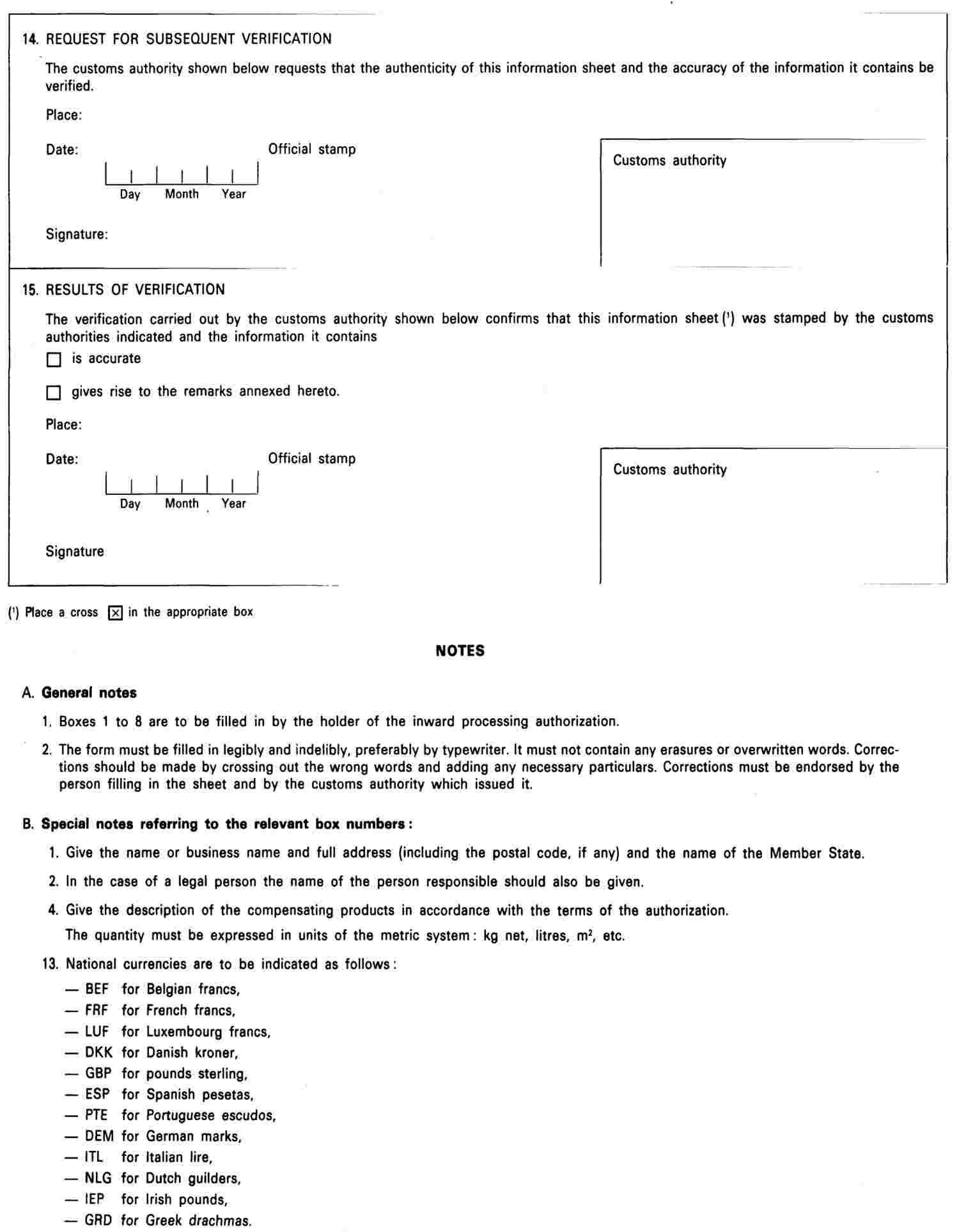 Annex 77 is hereby amended as follows: