Having regard to the Treaty on the Functioning of the European Union, and in particular Article 292 thereof,

HAS ADOPTED THIS RECOMMENDATION:

This Annex spells out the principles, the main actors of the Migration Preparedness and Crisis Blueprint and describes in detail its functioning in the two stages.

1.   PRINCIPLES AND ACTORS FOR THE TWO STAGES

In identifying the necessary measures and assigning responsibilities to the respective actors, the Migration Preparedness and Crisis Blueprint should operate on the basis of the following principles:

The actors involved in the implementation of the two stages of the Migration Preparedness and Crisis Blueprint are the following:

The objective of the Migration Preparedness and Crisis Blueprint in its monitoring and preparedness stage is to support a more coordinated use of the existing legislation by reinforcing and sharing common situational awareness between all actors involved, developing an early warning/forecasting system at EU level and supporting the development of the necessary resilience in Member States to efficiently deal with any type of migration crisis.

The first stage of the mechanism aims to achieve the following core objectives:

The Commission, where necessary in cooperation with EEAS, should play a leading role in the monitoring and preparedness stage using all its assets including European Migration Liaison Officers, the Emergency Response Coordination Centre (ERCC) and available funds in accordance with their respective mandates, objectives and procedures. The Commission should chair the Network and provide the secretariat thereof, collect the information and provide the necessary reports and monitor the implementation of the measures to be undertaken by any actor.

The Member States, EU Agencies and other actors should support the Commission in the above role, in particular by providing timely and accurate information, analysis and forecasts as well as assessment of their preparedness and contingency planning.

The necessary discussions at technical, strategic and if necessary political level requiring measures in Member States should be undertaken in the relevant Council preparatory bodies on the basis of the findings of the Commission reports issued under this stage of the Migration Preparedness and Crisis Blueprint.

In situations where the Council decides to issue operational conclusions and recommendations, the Network should support their implementation by exchanging the relevant information.

The Commission should convene regular, at least quarterly, meetings or videoconferences of the Network. The frequency of such contacts should depend on the severity of the migratory situation as well as the issues identified through migration and contingency monitoring.

Where relevant and feasible, representatives of the main third countries of origin, transit and/or destination as well as representatives of key international partners and stakeholders should be invited on an ad hoc basis to discussions of the Network focused on a particular migratory route with the aim of timely and regular information exchange on the migratory flows, smuggling activities and any other factors (including geopolitical, health, environmental, climatic, demographic or any other socio-economic factors) impacting asylum, migration or border management of the EU. The modalities of this contribution should be developed in consultation with the countries in question through the respective EU Delegations, in close coordination with the EEAS.

Preparedness should be a key component of the migration dialogues with third countries, in particular in the EU’s neighbourhood, and should aim at establishing communication channels and identifying local actors, to be used and contacted in case of a crisis.

All Points of Contact of the Network should provide information in order to help establish the necessary situational picture. The sharing of situational awareness includes data on migratory flows, information on reception, asylum and border management systems, relevant national developments in the field of migration in Member States and third countries, early warning/forecasting notifications, as well as cooperation actions with third countries. All Points of Contact should share challenges, shortcomings and response actions on the ground in the interest of a common situational picture at EU level. The exact functioning of the network should be detailed in Standard Operating Procedures.

The Network should make full use of the available communication channels and platforms including, where possible, the IPCR platform with its dedicated functionalities. If the available tools are not sufficient, the Commission will consider improving its existing platforms or setting up a dedicated secured web-based platform ensuring the swift exchange of information within the Network.

Based on these contributions, the Commission should issue situational reports – a Migration Situational Awareness and Analysis (MISAA) report with a frequency that should be decided by the Network during the monitoring and preparedness stage. The MISAA report should build upon the template and methodology of the Integrated Situational Awareness and Analysis (ISAA) report currently issued and developed during the IPCR activation for the 2015 refugee crisis and it will replace the ISAA report if the said IPCR is deactivated by the Presidency. Where possible, the actors should also share the information received from non-EU sources including third countries and international partners. The MISAA report should identify trends and possibly contain early warning/forecasts of flows allowing for the alerting of all actors and for their corrective measures. The MISAA report should be shared exclusively with the actors via the IPCR platform in full compliance with the rules for the access to this platform, with the respective involvement of the Emergency Response Coordination Centre.

Member States should discuss the necessary measures to be taken and conclusions as identified in the MISAA report. Member States should carry out discussions at technical, strategical and if necessary political level in the respective Council preparatory bodies or Council meetings. The Council may issue operational conclusions and recommendations, which should be followed up by the relevant actors with the support of the Network.

Supporting the development of resilience

Building on the migration management reports and national strategies as foreseen by Article 6(4) and (6) of the proposal for a Regulation on Asylum and Migration Management and in order to enhance the resilience of the overall EU migration management, a migration contingency cycle should be set up.

In line with Article 6(3) of the proposal for a Regulation on Asylum and Migration Management, Member States shall have national strategies in place to ensure sufficient capacity in place for the effective asylum and migration management which shall include information on how Member States are implementing the principles set out in the said Regulation and legal obligations stemming therefrom at national level. Those strategies shall include contingency planning at national level, while taking into account the contingency planning pursuant to relevant legislation including Articles 8(6) and 9(3), (5) and (6) of Regulation (EU) 2019/1896 (European Border and Coast Guard Agency) and the implementation of the European integrated border management as laid down by that Regulation.

EU Agencies should report to the Commission on their capacities and contingency plans, as well as with any other reports that may be used by the Commission in this context.

The EEAS should contribute on the external aspects of migration and its cooperation actions with third countries of origin, transit and/or destination.

Third countries should be given the possibility to share their own migration strategies and contingency plans with the Commission or with the Network on a voluntary basis.

Member States should discuss the findings of the annual migration management reports produced by the Commission in the appropriate fora.

The Commission with the support of the other actors in the Network should provide a framework for monitoring the follow up to the findings of the annual migration management reports and should report on the progress achieved and the state of play in the following yearly cycle reporting.

The objective of the Migration Preparedness and Crisis Blueprint in its crisis management stage is to support a rapid, efficient and coordinated EU response to a migration crisis by providing timely and up-to-date information to the EU decision-makers on the unfolding operational situation as well as by supporting monitoring, coordination on the ground, and communication at technical level between all actors.

In the Crisis Management stage of the Migration Preparedness and Crisis Blueprint, and as long as the general EU crisis mechanisms (the Union Civil Protection Mechanism, Integrated Political Crisis Response, ARGUS and Crisis Response Mechanism) are not activated, the Migration Preparedness and Crisis Blueprint uses its framework including the Network and reporting mechanism in order to pursue its objective.

Once the general EU crisis mechanisms are activated in line with their respective procedures and objectives, the role of overall crisis management including the necessary coordination among them should be ensured.

During the activation of Stage 2, the activities of Stage 1 continue and are intensified.

The Network, as activated and chaired by the Commission, should support the work of the general EU crisis mechanisms. The support should in particular focus on providing the situational awareness necessary for discussions and decisions within those mechanisms and by following up their implementation by the relevant actors. To this aim, the Network should meet regularly via videoconference and discuss all operational aspects of decisions taken within the general EU crisis mechanisms and report back to them.

Member States crisis management centres if activated should ensure the adequate connection to the general EU crisis mechanisms, including the UCPM and its ERCC, as well as support the activity of their respective Point of Contact in the Network in line with the guidelines referred to in Recommendation 5.

Where necessary and in complementarity to the meetings held in the Council under IPCR rules, further discussions could be undertaken in the relevant Council preparatory bodies or in the Council on the basis of the findings of the Commission’s situation reports.

Each actor should take the necessary measures including those listed in the toolbox under letter (d) below.

The following measures constitute the toolbox to respond to a migration crisis in accordance with the relevant legislation.

Measures in countries of origin, transit and/or destination

Measures in Member States at the EU external borders

Measures in other Member States under pressure

This diagram presents in visualised way the multilevel construction of the Migration Preparedness and Crisis Blueprint. 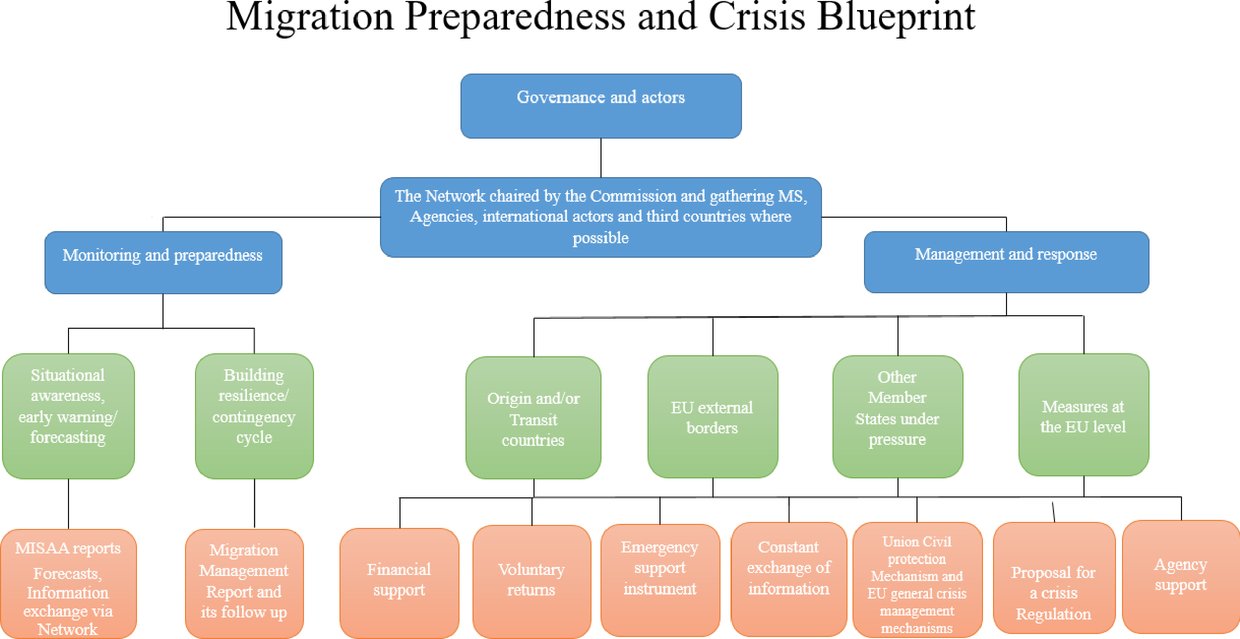