on audible warning devices for two- or three-wheel motor vehicles

Having regard to Council Directive 92/61/EEC of 30 June 1992 relating to the type-approval of two- or three-wheel motor vehicles (1),

Whereas the internal market comprises an area without internal frontiers in which the free movement of goods, persons, services and capital is ensured; whereas the measures required for that purpose need to be adopted;

Whereas, with regard to audible warning devices, in each Member State two- or three-wheel motor vehicles must display certain technical characteristics laid down by mandatory provisions which differ from one Member State to another; whereas as a result of their differences, such provisions constitute a barrier to trade within the Community;

Whereas these obstacles to the operation of the internal market may be removed if the same requirements are adopted by all Member States in place of their national rules;

Whereas it is necessary to draw up harmonized requirements concerning audible warning devices for two-or three-wheel motor vehicles in order to enable the type-approval and component type-approval procedures laid down in Directive 92/61/EEC to be applied for each type of such vehicle.

Whereas, given the scale and impact of the action proposed in the sector in question, the Community measures covered by this Directive are necessary, indeed essential, to achieve the aim in view, which is to establish Community vehicle type-approval; whereas that aim cannot be adequately achieved by the Member States individually;

Whereas in order to facilitate access to the markets of non-Community countries it would seem necessary to establish equivalence between the requirements of this Directive and those of Regulation No 28 of the United Nations Economic Commission for Europe,

This Directive applies to audible warning devices for all types of vehicle as defined in Article 1 of Directive 92/61/EEC.

In accordance with the provisions of Article 11 of Directive 92/61/EEC, equivalence between the requirements laid down in this Directive and those laid down in UN/ECE Regulation No 28 (E/ECEATRANS/505 — Rev. 1 /Add. 27) is hereby acknowledged.

1.   Member States shall adopt and publish the provisions necessary to comply with this Directive not later than 14 December 1994. They shall forthwith inform the Commission thereof.

From the date mentioned in the first subparagraph Member States may not, for reasons connected with audible warning devices, prohibit the initial entry into service of vehicles which conform to this Directive.

They shall apply the provisions referred to in the first subparagraph as from 14 June 1995.

2.   Member States shall communicate to the Commission the texts of the provisions of national law which they adopt in the covered by this Directive.

This Directive is adressed to the Member States.

REQUIREMENTS APPLYING TO THE COMPONENT TYPE-APPROVAL OF AUDIBLE WARNING DEVICES

Order No (assigned by the applicant): ...

The application for component type-approval in respect of a type of audible warning device intended for two or three-wheel motor vehicles must contain the information set out in Annex II to Council Directive 92/61/EEC, Part A, sections 9.5.1 to 9.5.4. 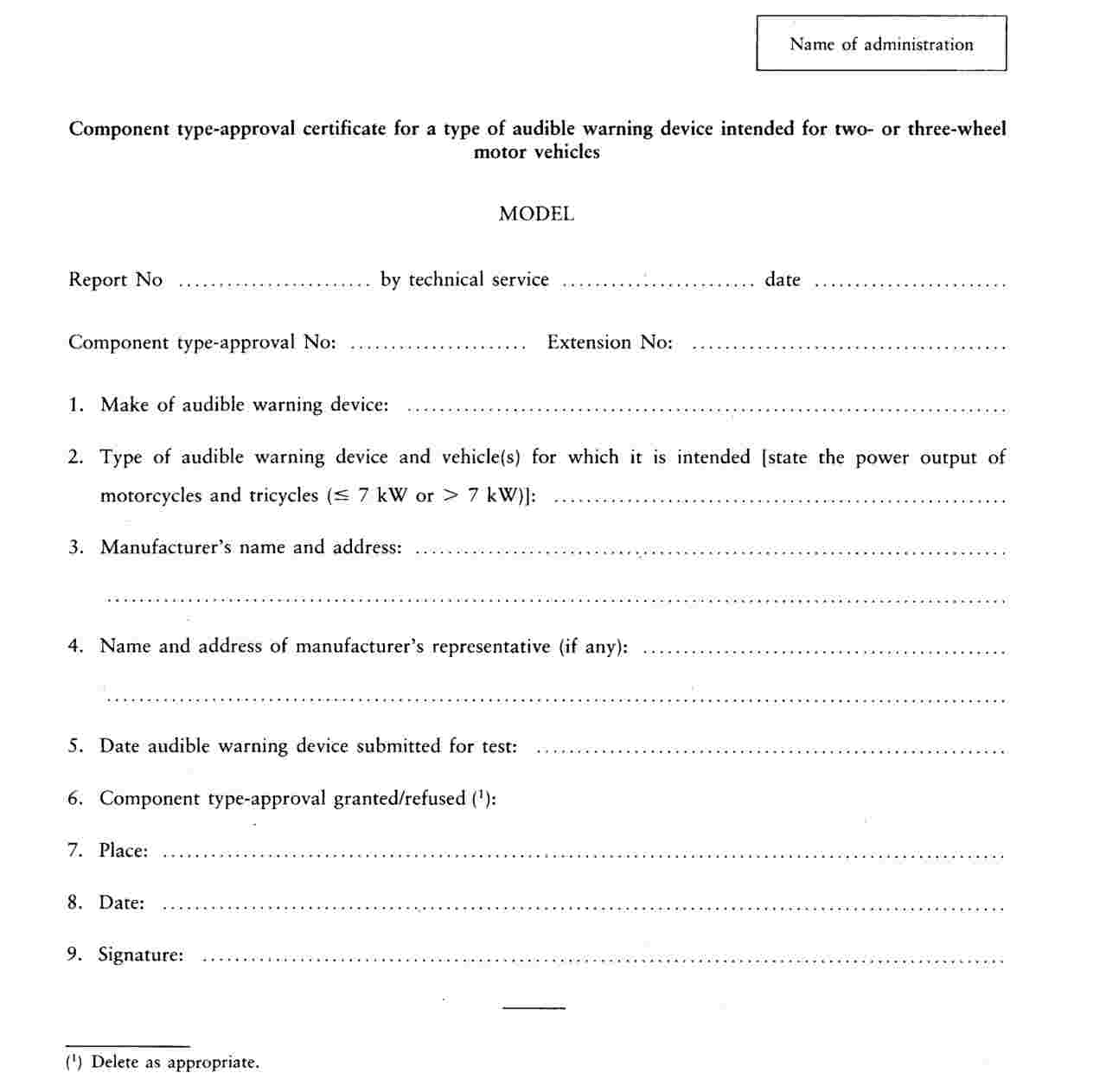 Order No (assigned by the applicant): ...

The application for component type-approval in respect of the installation of an audible warning device on a type of two- or three-wheel motor vehicle must contain the information set out under the following points in Annex II to Council Directive 92/61/EEC, Part A, sections: 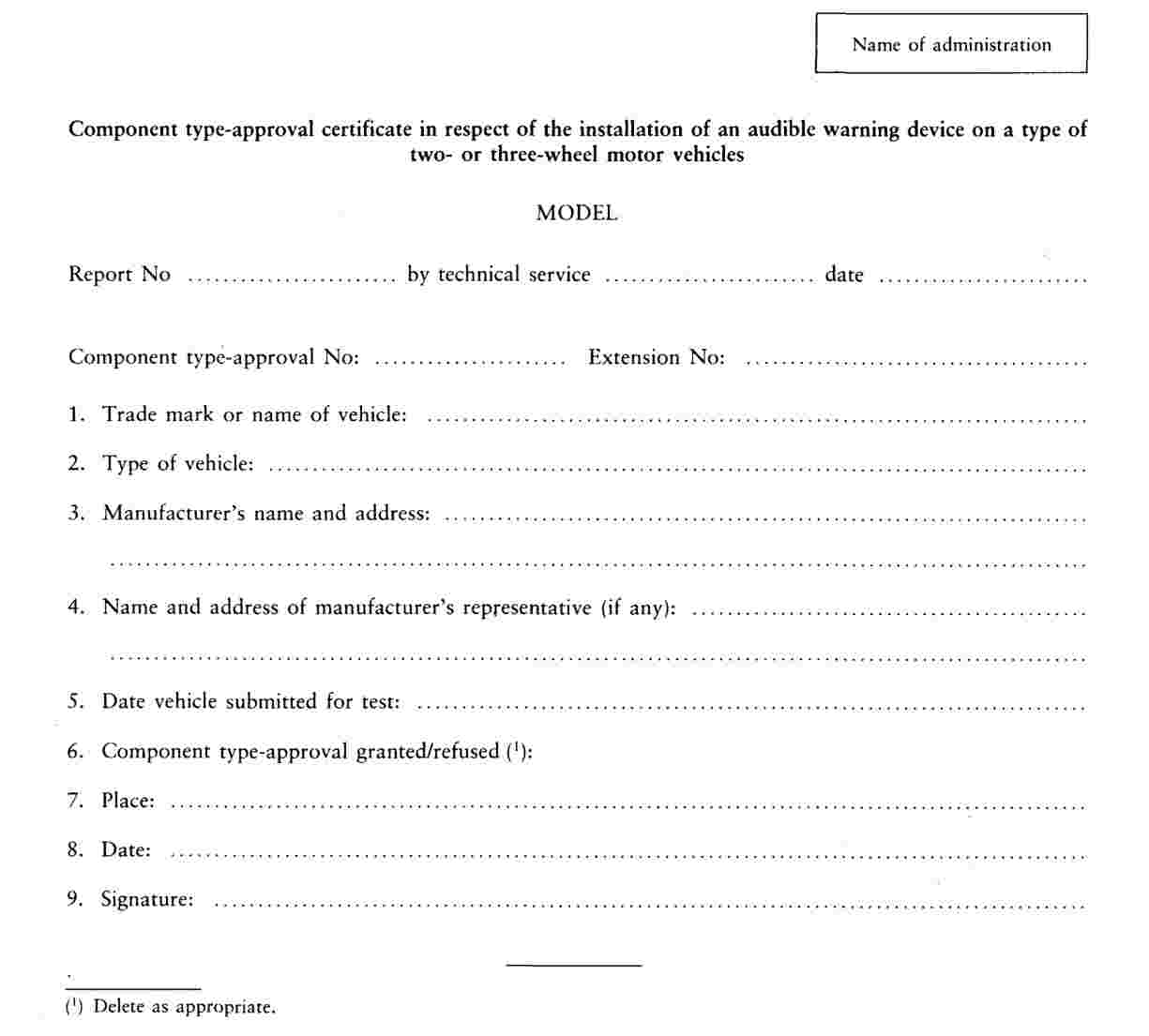