Report on export authorisation in 2019 pursuant to the Regulation concerning trade in certain goods which could be used for capital punishment, torture or other cruel, inhuman or degrading treatment or punishment

-are inherently abusive and should not be traded at all (Annex II), or

-can have legitimate uses, such as law enforcement equipment (Annex III) or goods for therapeutic use (Annex IV).

Trade in such goods is subject to certain restrictions.

Article 26(3) of the Regulation states that the Member States must draw up a public, annual activity report. The report must provide information on the number of applications received, the goods and countries concerned, and the decisions taken on the applications. Article 26(4) states that the Commission must draw up an annual report comprised of the annual activity reports published by the Member States. It must make the report publicly available.

This Commission report provides information on Member States’ authorisation activities concerning exports of goods in 2019( 2 ). which could be used for torture or for capital punishment in 2019

All Member States have reported on the number of export authorisations granted and refused under Articles 11(1) and 16(1) and on the goods and countries of destination in question. In most cases, the competent authorities in the Member States have also reported on the numbers or quantities of goods authorised for export and the category of end-user to whom the goods were supplied.

The Regulation requires the competent authorities to check if an export authorisation has indications that, if exported, the goods in question might be used for torture or other cruel, inhuman or degrading treatment or punishment (Annex III) or for capital punishment (Annex IV). This is why Article 20(8) of the Regulation states that the competent authority should ‘receive complete information in particular on the end-user, the country of destination and the end-use of the goods’.

Articles 3, 4 and 5 of the Regulation prohibit the export, import and transit of the goods listed in Annex II, respectively. The Regulation allows the competent national authorities to grant a derogation from the prohibition, but only if it is demonstrated that the goods concerned will be used exclusively for public display in a museum (either in a non-EU country or, in accordance with Article 4, in a Member State) in view of their historic significance. The competent authorities reported that they had not granted such derogations in 2019.

Annex 2 provides information on the number of applications authorised and denied over the period 2017-2019.

Annexes 4 and 5 provide an overview of the goods authorised for export, their destinations and their reported end-use.

The information received by the Commission makes it possible to draw a distinction between end use for law enforcement, science and healthcare (in hospitals and for veterinary use) and end use by security and trading firms.

Annex 6 summarises the information provided to the Commission on the reported end-use of authorised exports in 2019.

This report does not provide information on exporters’ use of the Union General Export Authorisation for exports of goods listed in Annex IV (Annex V to Regulation (EU) 2019/125).

The number of ‘denials’ for 2019 differs from the number in the review report (COM (2020) 343), as it takes into account data not available at the time of finalising the report.

Goods listed in Annex III under code 3.1: portable weapons and equipment for the administration or dissemination of a dose of an incapacitating or irritating chemical substance.

Goods listed in Annex III under code 3.6: fixed or mountable equipment for the dissemination of incapacitating or irritating agents over a wide area.

Report on export authorisation in 2019 pursuant to the Regulation concerning trade in certain goods which could be used for capital punishment, torture or other cruel, inhuman or degrading treatment or punishment

Reported destinations 1 of authorised exports in 2019 2

Overview of reported authorised exports of Annex III goods in 2019 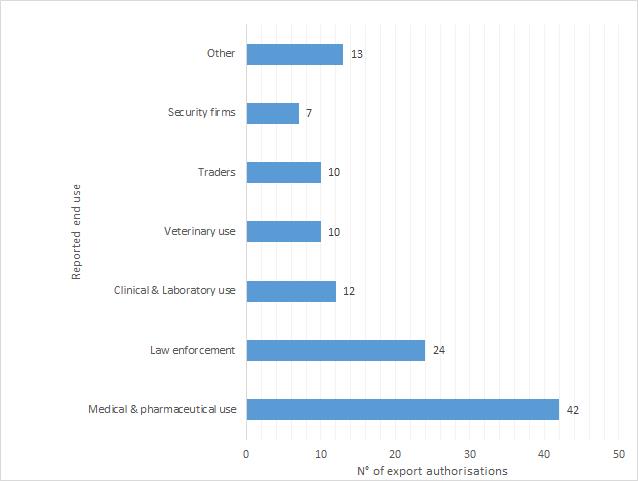 If a particular name is used in the list of destinations, it should not be construed as going beyond referring to a (customs) territory commonly known by that name.

‘Other destinations’ include those to which one export authorisation only was reported, namely: Albania, Antarctic, Barbados, Belize, Central African Republic, Costa Rica, Cuba, Democratic Republic of the Congo, Falklands Islands, French Polynesia, Gibraltar, Iraq, Kosovo, Lebanon, Mali, Niger, Pakistan, Saudi Arabia, Saint Helena (UK), Sint Marteen, Sri Lanka, Thailand and Uruguay. One reported authorisation to one of the Channel Islands has not been accounted for the purposes of this report, as it does not qualify as an export within the meaning of Article 2(d) of Regulation (EU) 2019/125.

The number of export authorisation does not match the number referred to in in previous Annexes, as not all authorities in the Member States stipulate the end-use.