This publication confers the right to oppose the application pursuant to Article 51 of Regulation (EU) No 1151/2012 of the European Parliament and of the Council (1).

3.   Description of the agricultural product or foodstuff

‘Međimursko meso 'z tiblice’ is a product composed of the following two components: ‘slanína’ (back fat), and smoked, heat-treated cuts of pig meat.

‘Slanína’ (a term used in the defined geographical area) is a product obtained by heat-treating back fat under controlled conditions. The back fat is cooked in boiling water, with the possible addition of condiments (onion, garlic, pepper and bay leaves), for at least 30 minutes. The cooked fat is drained and cooled, then chopped and seasoned with 2-3 % of table salt, with the addition of garlic, and left to lie at room temperature for up to 24 hours.

The cuts of pig meat are cured using salt, with the possible addition of condiments (sugar, bay leaves, garlic and pepper) and must be left to lie in their cured state for at least 21 days. They are then smoked using the wood of beech and hornbeam, until they reach a minimum temperature of 40 °C in the centre of the cuts of meat. The cuts of pig meat are then roasted in the oven for at least 1 hour at a temperature of 180-220 °C.

The heat-treated cuts of meat are stacked on top of the fat, so that each cut of meat is coated by the fat. The final product, ‘Međimursko meso 'z tiblice’, is obtained after maturing for at least 45 days. It is then ready to be eaten.

Organoleptic properties of the product:

External appearance: The fat is white to yellowy-white in colour, the cuts of meat are reddish in colour.

Appearance when cut: The cuts of meat are pinkish-red in colour, in light shades, as is typical for cured meats.

Texture: The cuts of meat are soft and crumbly (with good friability), while the fat has a fine-grained consistency and is spreadable.

Aroma and taste: ‘Međimursko meso 'z tiblice’ has a mild flavour, with an aroma and taste typical of smoked, heat-treated pig meat, a moderately salty taste and a mild aroma and flavour of the garlic seasoning.

3.3.   Feed (for products of animal origin only) and raw materials (for processed products only)

The raw ingredients used to produce ‘Međimursko meso 'z tiblice’ are fresh pig meat (the hind leg, whole, boned and rindless, pork loin and back, shoulder, neck, ribs and belly) and back fat. Pig carcasses with a maximum weight of 105 kg may be used. The pigs must be at least 10 months' old when slaughtered.

3.4.   Specific steps in production that must take place in the identified geographical area

All stages in the production of ‘Međimursko meso 'z tiblice’, from slaughter, butchering, salting and smoking to heat treatment and maturing, occur within the geographical area defined in point 4.

The final product is delivered to the market vacuum-packed or pre-packed in a traditional container known as a ‘tiblica’. The finished product must be at least 50 % meat.

3.6.   Specific rules concerning labelling of the product the registered name refers to 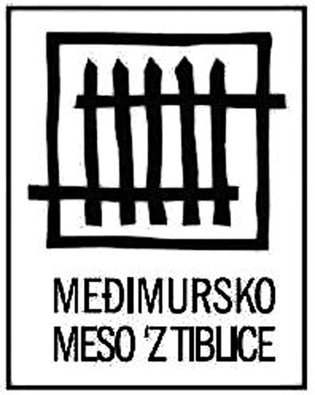 4.   Concise definition of the geographical area

The production area comprises the territory of Međimurje County, which is located in the north-west of Croatia. It is delineated by natural boundaries — the River Mura to the north and the River Drava to the south. The hilly area to the west forms part of the pre-Alpine region, while the central and eastern parts are low-lying and form part of the Pannonian Plain. Međimurje County comprises three towns and 22 municipalities. The towns of Međimurje are Čakovec, Mursko Središće and Prelog. The municipalities are Belica, Dekanovec, Domašinec, Donja Dubrava, Donji Kraljevec, Donji Vidovec, Goričan, Gornji Mihaljevec, Kotoriba, Mala Subotica, Nedelišće, Orehovica, Podturen, Pribislavec, Selnica, Strahoninec, Sveta Marija, Sveti Juraj na Bregu (seat: Lopatinec), Sveti Martin na Muri, Šenkovec, Štrigova and Vratišinec.

5.   Link with the geographical area

The protection of the product ‘Međimursko meso 'z tiblice’ is based on its reputation and the traditional know-how and skill of the local inhabitants in the characteristic way they prepare it in the defined geographical area, which affects the quality of the product. Međimurje County is located in the most northerly part of Croatia. Međimurje lies on the boundary of two major relief units: the Eastern Alps and the Pannonian Plain. Two regional units can be distinguished by their natural geographical features: the hilly Upper Međimurje and the low-lying Lower Međimurje. The area’s general climatic features are determined by the fact that it belongs to the climatic region of the Pannonian Plain, characterised by hot summers and cold winters, as well as a sharp rise in temperature in spring and clement temperatures in autumn. The climate is moderate continental, characterised by a quick transition from a cold to a warm part of the year.

Pig farming has long been the dominant livestock industry in the Međimurje region, and remains so to this day. The most important events in the life of peasant families of Međimurje were pig slaughtering, weddings and religious feasts. The pig-slaughtering period was in wintertime, from November to January, though usually around Christmas. The first written records of pig slaughtering and the preparation, preservation and consumption of pig meat appeared as late as the end of the 19th and early 20th centuries, as do the first written records of ‘Međimursko meso 'z tiblice’ (E. Kerecsenyi, Povijest i materijalna kultura pomurskih Hrvata (History and Material Culture of the Pomurje Croats), 1982). As families in Međimurje were large and poor, and most had just one pig, no part of the animal could go to waste. The climatic conditions of the geographical area of Međimurje greatly influenced how the pig meat was preserved. The specific microclimatic conditions, with cold winters and hot summers, high relative humidity throughout the year and the absence of significant airflows (winds) made it impossible to preserve the meat by drying it. Since it was impossible to dry the pig meat and there were no cooling devices where the meat could be preserved, the women of Međimurje had to devise a simple way to preserve as much pig meat as possible, without it deteriorating. They came up with a very effective way to preserve the meat in the long term — by interlaying the pig meat and the fat in a wooden container known as a ‘tiblica’. That way, the prepared product would keep in the larder for months. To prevent such a traditional means of preserving food and preparing ‘Međimursko meso 'z tiblice’ from being forgotten, it was recorded in a culinary publication entitled Vodič kroz hrvatske gastro ikone (Guide through Croatian culinary icons), in which the authors have brought together a variety of traditional products from all over Croatia under the epithet of cultural icons, which points to the reputation ‘Međimursko meso 'z tiblice’ confers on the geographical area of Međimurje (Vodič kroz hrvatske gastro ikone, 2007).

The distinctiveness of ‘Međimursko meso 'z tiblice’ lies above all in the traditional way it is prepared, which greatly influences the properties and quality of the finished product. The method of preparing ‘Međimursko meso 'z tiblice’ — which has proved highly effective down the ages, particularly when it comes to preserving the quality of the product over a lengthy period — has been retained to this day. ‘Međimursko meso 'z tiblice’ is prepared in a specific way, by being stacked in a container for maturing, with the fat on the bottom row, a row of pig meat on top of it, and so on up to the top of the container, which ends with a row of fat. It is important to make sure any air is squeezed out, to prevent the meat from deteriorating. When stacking the meat and fat, the skill and know-how of the producers themselves is important, particularly when it comes to pressing the meat onto the fat and carefully compacting the ingredients, to ensure no air remains that could lead to the entire product deteriorating.

‘Međimursko meso 'z tiblice’ has been the subject of several scientific studies, including one from 2012 which found that it was a wholesome, safe product, since none of the samples of meat or fatty tissue tested contained pathogenic bacteria. The same study found that its flavour and aroma and the consistency of the meat scored particularly well. The full, ripe (aromatic) flavour of the product and the soft consistency of the meat can be attributed to interaction or changes in the muscle and fatty tissue (scientific paper, I. Filipović, V. Dobranić, L. Kozačinski et al, 2012).

The reputation and quality enjoyed by ‘Međimursko meso 'z tiblice’ is evidenced to this day by the fact that the name and its preparation method are referred to in specialist journals and magazines on meat (Meso journal, 2009 and Vikend kuhinja magazine, 2015).

The reputation of ‘Međimursko meso 'z tiblice’ came to the fore in the 1970s and 1980s, when the following culinary competitions — still held to this day — were first organised in Međimurje and beyond:

The link between the name ‘Međimursko meso 'z tiblice’ and the geographical area of Međimurje is also evident in its promotion by tour guides in the Međimurje region, where the product is presented as a traditional local speciality (Tourist Board of the town of Čakovec, 2014).

The causal link between ‘Međimursko meso 'z tiblice’ and the Međimurje region, where the product originates, is based on the traditional know-how and skill of the local inhabitants in preparing this product and in its quality. ‘Međimursko meso 'z tiblice’ is a traditional product of particular quality and value and forms an integral part of the cultural heritage of the Međimurje region. It is a distinctive product that has been preserved to this day and owes its properties above all to its preparation method, i.e. preserving the meat in fat.

The interaction between the meat and the fat during storage has a direct effect on the formation of the organoleptic properties of ‘Međimursko meso 'z tiblice’ (a ripe flavour and more tender meat), while the microbiological requirements in terms of the safety and wholesomeness of meat products are also met. Nowadays, ‘Međimursko meso 'z tiblice’ is a product of equal interest to small and large meat-production plants and farm holdings and is also aimed at the tourist market. Alongside other traditional dishes from Međimurje, this autochthonous product not only remains a regular feature on the menus of restaurants and in the home, but its distinctive packaging has also found it a place in many sales outlets.

Reference to publication of the specification

(the second subparagraph of Article 6(1) of this Regulation)