This publication confers the right to oppose the application pursuant to Article 51 of Regulation (EU) No 1151/2012 of the European Parliament and of the Council (1).

3.   Description of the agricultural product or foodstuff

‘Burrata di Andria’ PGI is a cow’s milk cheese made by adding cream to stretched-curd cheese. The casing is made entirely of ‘pasta filata’ (stretched curd) enclosing a filling of cream mixed with shredded pasta filata.

Appearance: ‘Burrata di Andria’ PGI is milk-white in colour, with a casing that is approximately ≥ 2 mm thick

Shape: round, shaped like a sack, topped with a characteristic bunched-up closure

Stracciatella : the filling is made from pasta filata that is shredded by hand then drenched in cream

3.3.   Feed (for products of animal origin only) and raw materials (for processed products only)

Cow’s milk. The cream used to make ‘Burrata di Andria’ PGI is produced by centrifuging milk or the whey from fresh milk and then pasteurising it at 72 °C for 15 seconds, or with pasteurised fresh cream and/or packaged UHT cream and/or mixtures thereof, in compliance with the microbiological criteria laid down in the legislation in force.

3.4.   Specific steps in production that must take place in the identified geographical area

All operations from the processing of the raw materials up to the production of the finished product must take place in the defined geographical area.

3.5.   Specific rules concerning slicing, grating, packaging, etc., of the product to which the registered name refers

‘Burrata di Andria’ has to be packaged on the premises where it is made within the geographical area defined under point 4, as it is a fresh product that tends to deteriorate rapidly.

‘Burrata di Andria’ may be packaged:

The product must be kept at a temperature of between 4 °C and 6 °C. The individual cheeses in the containers range in weight from 100 g to 1 000 g.

3.6.   Specific rules concerning labelling of the product to which the registered name refers

It is forbidden to add any description that is not expressly provided for. However, the use of names, trade names and private brands is permitted, provided that they have no laudatory purport and are not such as to mislead the consumer.

The logo of the Protected Geographical Indication ‘Burrata di Andria’ consists of the following graphics and words: 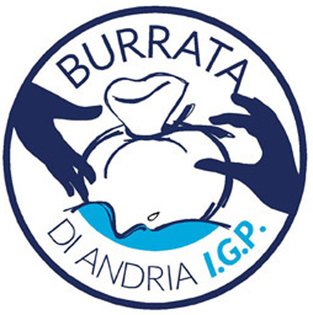 The ‘Burrata di Andria’ PGI logo must be reproduced generally on the labels, packaging and graphic sleeves of all packaged products, with the further specification that its dimensions — calculated by comparing the area of the rectangle corresponding to the overall height and width of the trademark — may not be less than 10 % or more than 25 % of the total area of the graphic sleeve.

The packaging must bear the European PGI symbol.

4.   Concise definition of the geographical area

The geographical area within which ‘Burrata di Andria’ PGI is produced and packaged is the entire territory of the Region of Apulia.

5.   Link with the geographical area

‘Burrata di Andria’ is a cheese typical of Apulia that differs from other cheeses on account of its particular production technique and its organoleptic characteristics, which make it one of the most highly prized and unusual cheeses from Apulia and the South of Italy.

According to oral tradition, Burrata di Andria was invented by Mr Lorenzo Bianchino on an old estate in the first decades of the 20th century. It is said that due to heavy snowfall, preventing him from delivering the milk to town, and meaning that he had to process it in some way and most importantly use the cream that naturally formed on the surface, Mr Bianchino tried using the same procedure as is used to make mantèche (casings made of aged pasta filata used to store butter), to make a fresh product. To this should be added the natural instinct of all peasant culture — avoiding waste and putting any surplus production to good use. Mr Bianchino therefore sought to mix the bits left over from pasta filata production with the cream and wrap this concoction in a casing also made of pasta filata.

One of the first references to this product dates back to 1931 in the ‘Guida del Touring Club’ — the Touring Club Guide, and Burrata di Andria became very popular from the outset, not just in Italy but also abroad, to such an extent that Shah of Iran himself became one of its most faithful aficionados. The simple and buttery taste of this typical Apulian product means that it is appreciated by everyone who, wishing to explore Mediterranean cuisine, seeks simple, genuine products that are not overly processed.

Burrata di Andria figures on the menus of numerous restaurants all over the world, which highlight the product’s value by specifying that it comes from Andria in Italy. In addition to having faithfully preserved the link between production tradition and territory, Burrata di Andria has succeeded in building up a remarkable market prominence given its limited shelf life, which restricts its marketing. As Burrata is a product that has to be consumed fresh, it seems to have been overlooked by the major commercial operators and relegated to a niche market. Nevertheless, there is still strong demand for this product due to the fact that it enjoys an excellent reputation among consumers.

Numerous articles have been written about this cheese in both the national and foreign press. In a report dated 26 August 1977, Il Corriere della Sera referred to the Burrata di Andria as an example of cheese-making excellence in Apulia and indeed all of southern Italy.

It was also described as an amazing and unique cheese in an article by Allan Bay on www.vivimilano.it/atavola.

In an article on 30 July 1999, the Il Sole 24 Ore, referred to Burrata as one of Apulia’s outstanding culinary specialities.

An article in La Stampa, written by Vanna Pescatori, entitled ‘La Mondanità’, this exquisite cheese is mentioned on the menu of the Gala dinner organised by Ferrari, the prestigious car manufacturer based in Maranello.

In an article in the Il Sole 24 ore Sunday supplement ‘Tempo Liberato’ by Davide Paolini entitled ‘Delicious culinary heritage that must be preserved’, the journalist likened ‘Burrata di Andria’ to other Italian culinary specialities such as Mozzarella di Bufala Campana, Coppa Piacentina, Caciocavallo Silano, etc. that should be protected and preserved.

On 18 August 1990, Nicola Dante Basile, in an article entitled ‘Cheese: pecorino is the leading export’ in the agricultural supplement of Il Sole 24 Ore, describe ‘Burrata di Andria’ as ‘demanding’ — no doubt in reference to the care bordering on veneration with which such a cheese should be treated.

In 2000, following the establishment of the register of traditional products by the Ministry of Agriculture (with Ministerial Decree No 350/1999), Burrata di Andria was immediately registered on the Apulia region’s very first list.

It has also been described by Alberto Pejrano as ‘a dairy jewel’ in the feature ‘Slow food weekends — the flavours of Frederick II’s Apulia’ on 9 October 2000. On the website www.stayinitaly.com in the section on the Apulia Region, ‘Burrata di Andria’ is mentioned as one of the region’s typical cheeses. Other writers on the website www.agipzone.com describe ‘Burrata di Andria’ as the height of refinement.

Despite its short shelf-life, Burrata di Andria is greatly appreciated abroad, even in countries as far away as the USA, where the product is shipped weekly by some member producers. An example of its popularity is that it figures on the menu of ‘Il Fornaio’, a well-known chain of restaurants that often organises themed campaigns during which it promotes certain specialities and delicacies.

Reference to publication of the specification

(the second subparagraph of Article 6(1) of this Regulation)

The consolidated text of the product specification can be consulted on the following website: http://www.politicheagricole.it/flex/cm/pages/ServeBLOB.php/L/IT/IDPagina/3335

by going directly to the homepage of the Ministry of Agricultural, Food and Forestry Policy (www.politicheagricole.it) and clicking on ‘Qualità e sicurezza’ (at the top right-hand side of the screen) and then on ‘Disciplinari di Produzione all’esame dell’UE’.