Having regard to the Treaty establishing the European Economic Community, and in particular Article 43 thereof,

Whereas equidae, being live animals, are included in the list of products in Annex II to the Treaty;

Whereas in order to ensure the rational development of equidae production, thereby increasing productivity in that sector, rules governing the marketing of equidae in intra-Community trade must be laid down at Community level;

Whereas the breeding and rearing of equidae and in particular of horses is generally included in the farming sector; whereas it constitutes a source of income for part of the farming population and should therefore be encouraged;

Whereas satisfactory results in that respect depend largely on the use of equidae registered in stud books maintained by officially approved organizations or associations;

Whereas intra-Community trade in registered equidae should be progressively liberalized; whereas complete liberalization of trade requires further additional harmonization, in particular as regards approval for the purpose of off-farm mating and the use of semen and ova in accordance with the characteristics of each studbook;

Whereas it is necessary to draw up, in accordance with a Community procedure, a harmonized model zootechnical origin and identification certificate;

Whereas the name of an animal is an essential factor in identifying equidae; whereas it is often impossible to trace an animal's descent and monitor its progress if its name is changed at a new owner's request; whereas the rules regarding the naming of equidae should be harmonized, in particular in order to prevent unfair practices;

Whereas provisions should be introduced preventing equidae from third countries from being imported on terms which are less stringent than those applicable within the Community;

Whereas it is advisable to adopt implementing measures regarding certain technical aspects; whereas, for the purposes of the measures envisaged, provision should be made for close and effective cooperation between Member States and the Commission within the Standing Committee on Zootechnics,

This Directive lays down the zootechnical and genealogical conditions governing intra-Community trade in equidae, their semen, ova and embryos.

Intra-Community trade in equidae and their semen, ova and embryos may not be prohibited or restricted on zootechnical or genealogical grounds other than those resulting from application of this Directive.

However, in the case of intra-Community trade in registered equidae, their semen, ova and embryos, national provisions which comply with the general rules of the Treaty shall be maintained pending the entry into force of the relevant Community decisions referred to in Articles 4 and 8.

1.   The following principles shall be taken into account when the decisions referred to in paragraph 2 are adopted:

2.   The Commission shall establish under the procedure laid down in Article 10 and in accordance with the principles set out in paragraph 1:

The list of organizations and associations maintaining or establishing studbooks, which are recognized on the basis of the criteria to be determined in accordance with Article 4 (2) (a) and subsequent updatings, shall be communicated to the Commission and the other Member States within the Standing Committee on Zootechnics.

1.   In intra-Community trade, equidae, which are registered in the Member State of dispatch must, except where a derogation has been agreed by common accord between the two organizations or associations concerned, be registered or entered in the appropriate studbook of the Member State of destination under the same name, with an indication, in accordance with international agreements, of the initial(s) of the country of foaling.

2.   Where the constitution of the organizations or associations so permits:

Pending implementation of relevant Community rules, the conditions applicable to imports of equidae and their semen, ova and embryos from third countries must not be more favourable than those governing intra-Community trade.

Where the procedure laid down in this Article is to be used, the Standing Committee on Zootechnics set up by Decision 77/505/EEC (5), shall act in accordance with the rules set out in Article 11 of Directive 88/661/EEC (6).

The Member States shall bring into force the laws, regulations and administrative provisions necessary to comply with this Directive by 1 January 1991 at the latest. They shall forthwith inform the Commission thereof.

MINIMUM INFORMATION IN THE IDENTIFICATION DOCUMENT 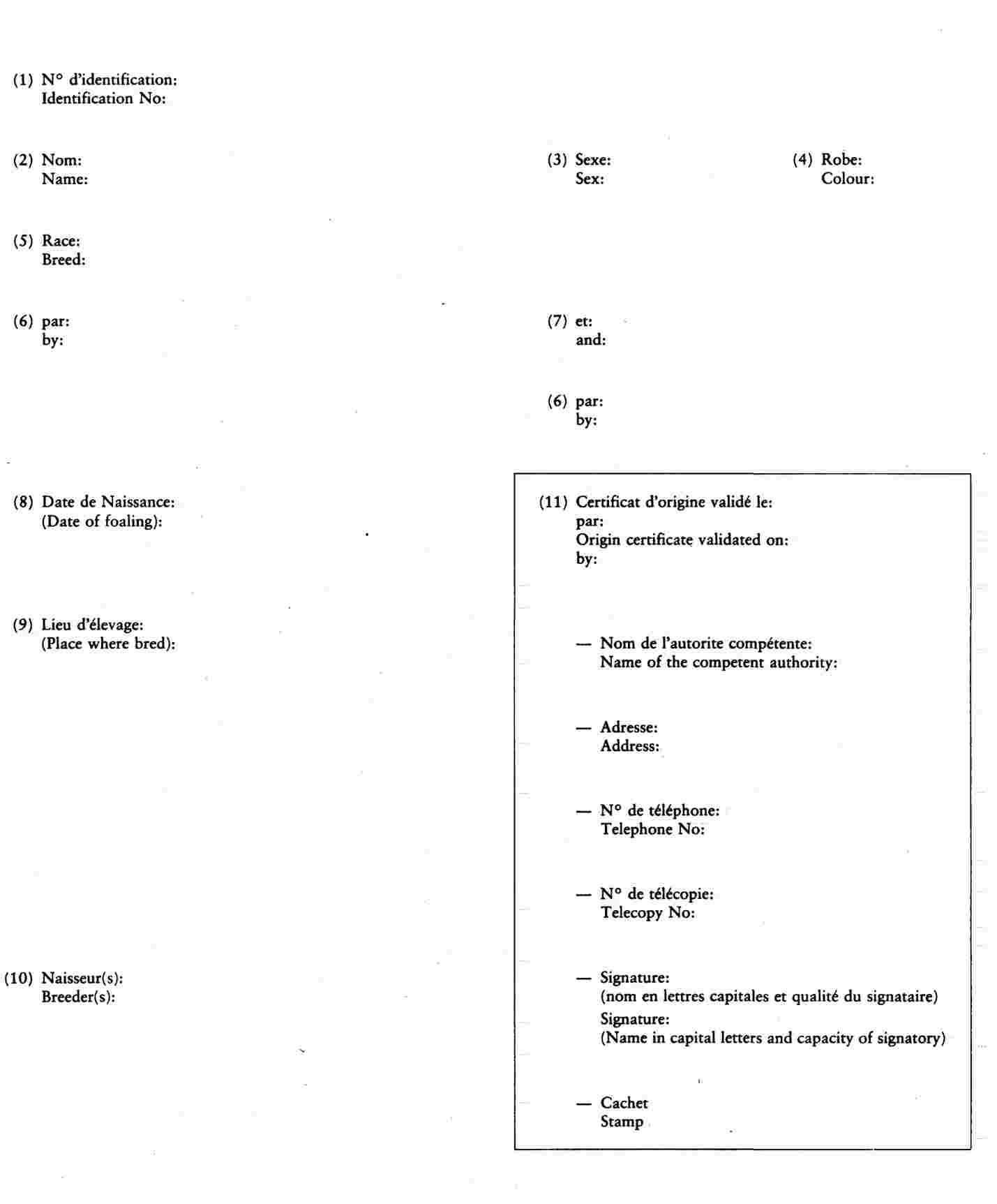 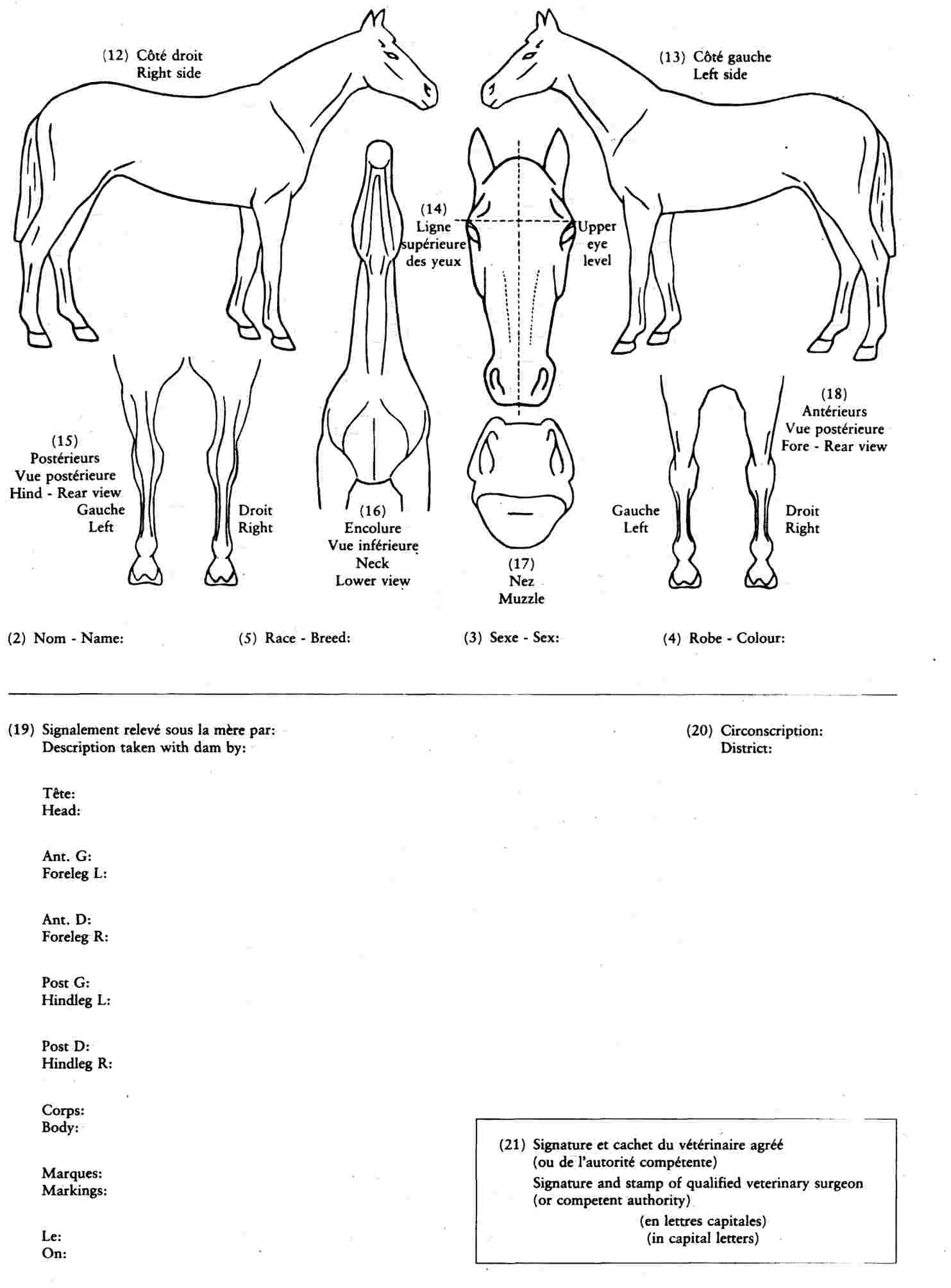