This publication confers the right to object to the application pursuant to Article 7 of Council Regulation (EC) No 510/2006 (1). Statements of objection must reach the Commission within six months of the date of this publication.

This summary sets out the main elements of the product specification for information purposes.

1.   Responsible department in the Member State:

‘Bovški sir’ is classed as a hard full-fat cheese. It is made from raw sheep’s milk from the native Bovec sheep breed, but it may also contain up to 20 % cow’s or goat’s milk.

The round whole cheeses are 20-26 cm in diameter and 8-12 cm in height, weighing between 2,5 and 4,5 kg. The rind is firm, smooth and even, grey-brown to pale beige in colour. The sides are slightly convex and the edges slightly rounded.

The cheese is compact, elastic, dense, breaking cleanly, brittle but not crumbly. It is of a uniform grey-beige colour, with sparse, evenly-distributed eyes the size of a lentil or small pea and occasional small holes and cracks. The texture of more mature cheeses is more compact and more brittle.

It has a distinctive full, intense, slightly piquant aroma and taste. If cow's or goat's milk has been added, the taste and aroma are a little milder.

The area where milk for Bovški sir and the cheese itself are produced is defined to the north and west by the national border with Italy, from Mali and Veliki Mangrt to the Učje border crossing. From the border, the perimeter of the area passes through Mali and Veliki Muzec, taking in the whole of Planina Božca to Na Vrhu, towards Hrib, through Pirovec, Krasji Vrh, Planina Zaprikraj, Zapleč as far as Lopatnik and Krn, Mali Šmohor, Bogatin, Vratca as far as Lanževica, Mala Vrata, Velika Vrata, Travnik, Malo Špičje and Kanjevec, past Triglav and Luknja to Križ, Prisojnik, Mala Mojstrovka, past Travnik to Jalovec, Kotovo Sedlo, Mali Mangart and back to the national border with Italy. The above border regions lie within the geographical area.

The procedures or measures indicated below are carried out in order to guarantee the traceability of Bovški sir.

Milk production: The milk must be produced in the defined geographical area. The keeping of a herd book ensures that the breed composition of the herd is appropriate. Farms also keep records of feed rations and feed purchases.

Milk collection: The milk intended for the production of Bovški sir must be collected and stored separately from other milk. Records are kept of the quantities of milk (sheep’s, goat’s and cow’s milk) produced and purchased per day, with a breakdown by farm.

Bovški sir is produced from raw sheep’s milk from the native Bovec sheep breed or from a mixture of sheep's, goat's and cow's milk. The proportion of goat’s or cow’s milk may not exceed 20 % of the total volume of milk.

The production of Bovški sir is limited to the period of the animals’ lactation, which coincides with the growing cycle of the pastures where the livestock graze. The major part of the basic feed ration in the animals’ lactation period is pasture, although this may also be combined with hay and silage. The basic ration must account for at least 75 % of the dry matter of the daily ration.

Matured milk, to which fresh milk may be added before coagulation, is used to produce Bovški sir. The milk is matured for at least 12 hours; this develops the native microflora and ensures that the milk has an appropriate level of acidity. In order to speed up fermentation, the use of home-made starter cultures (maturing of a small quantity of milk at quite a high temperature for at least 12 hours) or selected cultures is permitted. Before coagulation the milk is warmed to a temperature of 35-36 °C. Coagulation takes between 30 and 45 minutes. The coagulum is then broken into lumps the size of beans or peas which, after drying, become the size of grains of wheat. The curd is transferred to moulds and weighted down; pressing lasts between four and six hours.

Salting can be carried out either dry (for two days — salting and turning twice a day) or using brine (for 24 to 48 hours). After salting, each wheel is marked with the date when the maturing of the cheese began or with the batch designation. Bovški sir takes at least 60 days to mature. It is very important that the cheese is looked after (turned, wiped, cleaned) while maturing.

Bovški sir is a product the importance of which dates back several centuries. Archaeological findings also show that the Bovec area has been colonised for thousands of years. It is therefore presumed that cheese-making in the high Alpine pastures developed in this area three thousand years ago, at the same time as ironworking.

The first records of Bovec date back to before 1174, while the first records of cheese in this area date to the 14th century. Land registers and other records from this era indicated that cheese was worth a great deal, since farm taxes, fishing rents and so forth were calculated in quantities of cheese (Rutar, 1882).

The name Bovški sir (in Italian, Formaggio di Plezo vero) was first mentioned in a price list in the town of Videm (Udine) in 1756, which also shows that Bovški sir fetched higher prices than several other types of cheese.

Methods of pasturing, cheese-making and managing the Alpine pastures were described in the ‘Pašni red’ (pasture management regulations). Dr Henrik Tuma wrote an account of the Pašni red and the working day on Zapotok, an Alpine pasture above Zadnja Trenta, before World War I, which was published in the Planinski Vestnik. This shows that the way of producing Bovški sir, taking technological progress into account, is much the same today as it was centuries ago.

The high Alpine pastures and steep slopes mean that there is little space in the geographical area for intensive farming. The whole of the geographical area lies within the Natura 2000 area, and a substantial part of the geographical area is also within Triglav National Park. The geographical area is characterised by an Alpine-continental climate, partially influenced by the Mediterranean climate, which penetrates inland along the Soča river. Precipitation levels are high throughout the year (average levels for 1961-1990 in Bovec were 2 735 mm/year). Owing to the high surrounding peaks, some valleys are without sunshine for up to two months of the year. Despite the abundant rainfall, drought and high winds on the thin soil regularly reduce the grass yield, making the area best suited to rearing sheep and goats.

The sheep's milk used to produce Bovški sir comes from the native Bovec sheep breed, which developed over the centuries in the upper Soča valley and was named after the town of Bovec. The Bovec sheep breed is a distinctive dairy breed, and has a fine head structure and short ears. Down to the present day, breeding has been directed at the fundamental objective of developing adaptation to harsh grazing and rearing conditions, capacity to graze on high hill and mountain pastures, a placid temperament, longevity and resistance. The milk of Bovec sheep has a higher fat content in the dry matter than that of the remaining dairy breeds of sheep in Slovenia, which influences both the yield of cheese and its taste.

During the lactation period, dairy animals for the production of milk for Bovški sir are grazed on pastures throughout the area. Animals are grazed in the traditional way, which is at the same time the only feasible option financially. This means that the feed during the period in which they produce milk for Bovški sir is essentially fresh pasture, which contributes a great deal to the typical taste and aroma of Bovški sir. On the pasture land an exceptional diversity of flora can be found, which is associated with the altitude, climate and geological composition of the soil. The geographical area features plants which are typical of Alpine, continental and Mediterranean areas.

Cheeses which meet all the requirements of the specification are marked with the name of the producer, the ‘Bovški sir’ name and logo (reproduced below), the corresponding European Union logo and the national quality symbol. The percentage of goat’s or cow’s milk, if used, must also be indicated.

Producers may also indicate if the cheese was matured for more than a year or was produced in a mountain dairy. 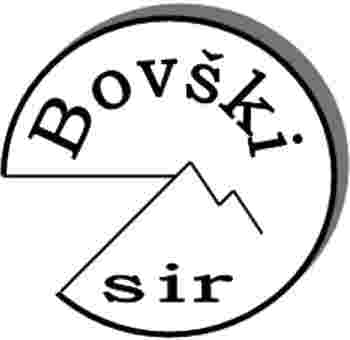