Consolidated text: Commission Decision of 21 May 2008 on the harmonisation of the 3400-3800 MHz frequency band for terrestrial systems capable of providing electronic communications services in the Community (notified under document number C(2008) 1873) (Text with EEA relevance) (2008/411/EC)Text with EEA relevance

This text is meant purely as a documentation tool and has no legal effect. The Union's institutions do not assume any liability for its contents. The authentic versions of the relevant acts, including their preambles, are those published in the Official Journal of the European Union and available in EUR-Lex. Those official texts are directly accessible through the links embedded in this document

This Decision aims at harmonising, without prejudice to the protection and continued operation of other existing use in this band, the conditions for the availability and efficient use of the 3 400 -3 800 MHz band for terrestrial systems capable of providing electronic communications services.

1.  Without prejudice to the protection and continued operation of other existing use in this band, when Member States designate and make available, on a non-exclusive basis the 3 400 -3 800 MHz frequency band for terrestrial electronic communications networks, they shall do so in compliance with the parameters set out in the Annex.

2.  Member States shall ensure that networks referred to in paragraph 1 give appropriate protection to systems in adjacent bands.

3.  Member States shall not be bound to implement the obligations under this Decision in geographical areas where coordination with third countries requires a deviation from the parameters in the Annex.

Member States shall make all practicable efforts to solve such deviations, which they shall notify to the Commission, including the affected geographical areas, and publish the relevant information pursuant to Decision No 676/2002/EC.

Member States shall allow the use of the 3 400 -3 800 MHz band in accordance with Article 2 for fixed, nomadic and mobile electronic communications networks.

Member States shall facilitate cross-border coordination agreements with the aim of enabling the operation of those networks, taking into account existing regulatory procedures and rights.

Member States shall keep the use of the 3 400 -3 800 MHz band under scrutiny and report their findings to the Commission to allow regular and timely review of the Decision.

Member States shall report on the application of this Decision on 30 September 2019 at the latest.

PARAMETERS REFERRED TO IN ARTICLE 2

, φ) is the power radiated by an antenna array system in direction (

where PTx denotes the conducted power (measured in Watts), which is input to the array system, and g(

, φ) denotes the array systems directional gain along the (

1. the duplex mode of operation shall be time division duplex (TDD);

4. base stations and terminal stations transmission shall be in compliance with the technical conditions specified in Part C and Part D, respectively.

The following technical parameters for base stations called block edge mask (BEM) are an essential component of conditions necessary to ensure coexistence between neighbouring networks, in the absence of bilateral or multilateral agreements between operators of such neighbouring networks. Less stringent technical parameters, if agreed among the operators of such networks, may also be used.

In Tables 3, 4, and 7 the power limits are determined relative to a fixed upper limit by means of the formula Min(P Max – A, B), which sets the lower (or stricter) of two values: (1) (P Max – A) expressing the maximum carrier power P Max minus a relative offset A, and (2) the fixed upper limit B.

To obtain a BEM for a specific block, the BEM elements that are defined in Table 1 are combined in the following steps:

1. in-block power limit is used for the block assigned to the operator;

2. transitional regions are determined, and corresponding power limits are used;

3. baseline power limit is used in the case of synchronised WBB ECS networks for spectrum within the band except from the operator's block in question and the corresponding transitional regions;

4. restricted baseline power limits are used in the case of unsynchronised and semi-synchronised WBB ECS networks;

5. for spectrum below 3 400 MHz the respective additional baseline power limit is used;

6. for coexistence with FSS/FS above 3 800 MHz an additional baseline power limit is used.

The Figure below provides an example of the combination of different BEM elements.

Example of base station BEM elements and power limits 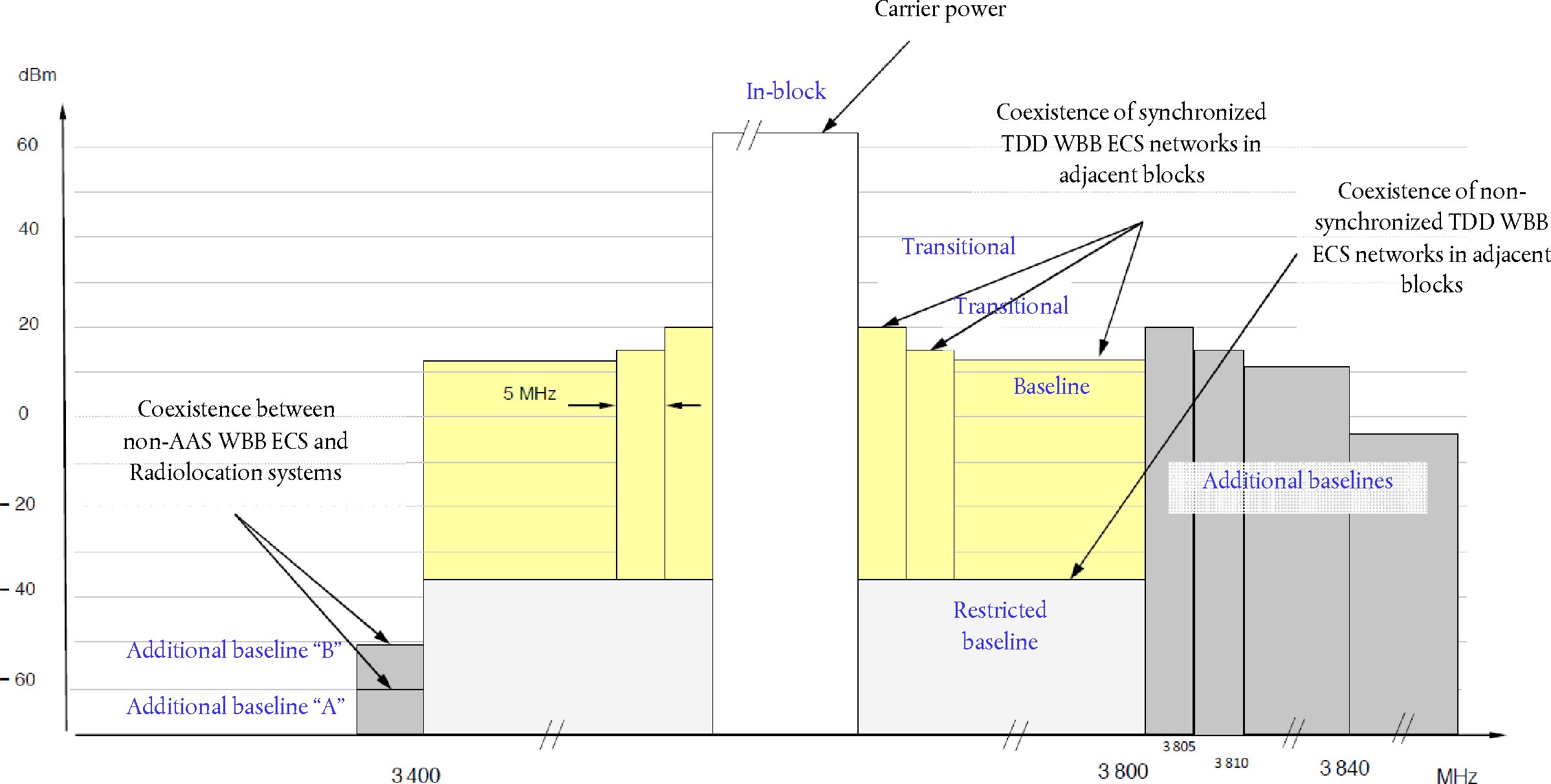 In-block power limit for non-AAS and AAS base stations

In the specific case of femto base stations, power control shall be applied to minimize interference to adjacent channels. The requirement on power control for femto base stations results from the need to reduce interference from equipment that may be deployed by consumers and may thus not be coordinated with surrounding networks. Member States wishing to include a limit in their authorisation or to use a limit for coordination purposes may define such limits on a national basis.

These restricted power limits are used for unsynchronised and semi-synchronised operations of base stations, if no geographic separation is available. In addition, depending on national circumstances, Member States may define a relaxed alternative restricted baseline power limit applying to specific implementation cases to ensure a more efficient usage of spectrum.

The additional baseline power limits reflect the need for protection of military radiolocation in some countries. Member States may select the limits from case A or B for non AAS depending on the level of protection required for the radar in the region in question. A coordination zone of up to 12 km around fixed terrestrial radars, based on AAS TRP limit of – 52 dBm/MHz per cell, may be required. Such coordination is under responsibility of the relevant Member State.

Other mitigation measures like geographical separation, coordination on a case-by-case basis or an additional guard band may be necessary. In case of indoor deployments, Member States may define a relaxed limit applying to specific implementation cases.

The additional baseline power limits are applied at the 3 800 MHz band edge to support the coordination process to be carried out at national level.

The inblock radiated power limit for fixed/nomadic terminal stations may exceed the limit in Table 8 provided cross-border obligations are fulfilled. For such terminal stations mitigation measures to protect radar below 3 400 MHz may be necessary, for example, geographical separation or an additional guard band.

( 1 ) If assigned blocks need to be offset to accommodate other existent users, a raster of 100 kHz must be used. Narrower blocks can be defined adjacent to other users, to allow efficient use of spectrum.