THE COUNCIL OF THE EUROPEAN UNION,

Having regard to the opinion of the European Parliament (1),

HAS DECIDED AS FOLLOWS:

The Agreement between the European Community and the Government of Canada on the processing of API/PNR data is hereby approved on behalf of the Community.

The text of the Agreement is attached to this Decision.

The President of the Council is hereby authorised to designate the person(s) empowered to sign the Agreement on behalf of the European Community in order to bind the Community (2).

This Decision shall be published in the Official Journal of the European Union.

(1)  Not yet published in the Official Journal.

(2)  The date of entry into force of the Agreement will be published in the Official Journal of the European Union by the General Secretariat of the Council.

THE EUROPEAN COMMUNITY AND THE GOVERNMENT OF CANADA, hereinafter referred to as the ‘Parties’:

HAVING REGARD to the Government of Canada requirement of air carriers carrying persons to Canada to provide Advance Passenger Information and Passenger Name Record (hereinafter API/PNR) data to the competent Canadian authorities, to the extent it is collected and contained in carriers’ automated reservation systems and departure control systems (DCS);

HAVING REGARD to Directive 95/46/EC of the European Parliament and of the Council of 24 October 1995 on the protection of individuals with regard to the processing of personal data and on the free movement of such data, and in particular Article 7(c) thereof;

HAVING REGARD to the Commitments made by the relevant competent authority with regard to the way in which it will process API/PNR data received from air carriers (hereinafter the Commitments);

COMMITTED to work together to assist the ICAO in the development of a multilateral standard for the transmission of PNR data obtained from commercial airlines;

HAVING REGARD to the possibility of effecting modifications to Annex I to this Agreement in the future by simplified procedures, particularly with regard to ensuring reciprocity between the Parties,

1.   The purpose of this Agreement is to ensure that API/PNR data of persons on eligible journeys is provided in full respect of fundamental rights and freedoms, in particular the right to privacy.

A competent authority of a requesting Party is an authority responsible in Canada or in the European Union for processing API/PNR data of persons on eligible journeys as specified in Annex I to this Agreement, which forms an integral part thereof.

1.   The Parties agree that API/PNR data of persons on eligible journeys will be processed as outlined in the Commitments made by the competent authority obtaining the API/PNR data.

2.   The Commitments set forth the rules and procedures for the transmission and protection of API/PNR data of persons on eligible journeys provided to a competent authority.

3.   The competent authority shall process API/PNR data received and treat persons on eligible journeys to which the API/PNR data relates in accordance with applicable laws and constitutional requirements, without discrimination, in particular on the basis of nationality and/or country of residence.

1.   A competent authority shall afford to a person who is not present in the territory in which that authority exercises jurisdiction, to whom the API/PNR data processed pursuant to this Agreement relates, access to the data as well as the opportunity to seek correction if it is erroneous or add a notation to indicate a correction request was made.

2.   The opportunity provided by the competent authority for access, correction and notation with respect to such data shall be afforded in circumstances similar to those where it would be available to persons present in the territory in which that authority exercises jurisdiction.

1.   In relation to the application of this Agreement within the Community, as it relates to the processing of personal data, air carriers operating eligible journeys from the Community to Canada shall process API/PNR data contained in their automated reservation systems and DCS as required by the competent Canadian authorities pursuant to Canadian law. The list of PNR data elements that air carriers operating eligible journeys shall transfer to the Canadian competent authority is contained in Annex II to this Agreement, which forms an integral part thereof.

2.   The obligation set forth in paragraph 1 shall only apply for as long as the Decision is applicable, ceasing to have effect on the date that the Decision is repealed, suspended or expires without being renewed.

1.   A Joint Committee is hereby established, consisting of representatives of each Party, who will be notified to the other Party through diplomatic channels. The Joint Committee shall meet at a place, on a date and with an agenda fixed by mutual consent. The first meeting shall take place within six months of entry into force of this Agreement.

2.   The Joint Committee shall, inter alia:

3.   The Parties represented in the Joint Committee may agree modifications to Annex I to this Agreement, which will apply as from the date of such agreement.

The Parties shall consult promptly at the request of either concerning any dispute, which has not been resolved by the Joint Committee.

In accordance with Annex III to this Agreement, which forms an integral part thereof, the Parties shall conduct on an annual basis, or as otherwise agreed, a Joint Review of the implementation of this Agreement and any matters related thereto, including developments such as the definition by the ICAO of relevant PNR guidelines.

Entry into force, amendments to and termination of the Agreement

2.   Without prejudice to Article 6(3), this Agreement may be amended by an Agreement between the Parties. Such amendment shall enter into force 90 days after the Parties have exchanged notifications of completion of the relevant internal procedures.

3.   This Agreement may be terminated by either Party at any time following written notification not less than 90 days in advance of the proposed termination date.

This Agreement is not intended to derogate from or amend legislation of the Parties.

IN WITNESS WHEREOF the undersigned, being duly authorised thereto, have signed this Agreement.

For the European Community 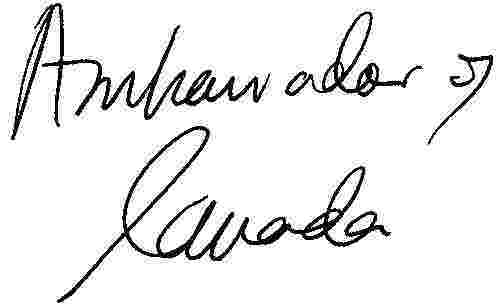 For the purpose of Article 3, the competent authority for Canada is the Canada Border Services Agency (CBSA).

PNR data elements to be collected

The Parties will communicate to each other in advance of the joint review the composition of their respective teams, which may include appropriate authorities concerned with privacy/data protection, customs, immigration, enforcement, intelligence and interdiction, and other forms of law enforcement, border security and/or aviation security, including experts from Member States of the European Union.

Subject to applicable laws, any participants in the review will be required to respect the confidentiality of the discussions and have appropriate security clearances. Confidentiality will not however be an obstacle to each Party making an appropriate report on the results of the joint review to their respective competent bodies, including the Parliament of Canada and the European Parliament.

The Parties will jointly determine the detailed modalities of the joint review.