Pursuant to Article 7a of Directive 98/70/EC 1 relating to the quality of petrol and diesel fuels (henceforth the "Fuel Quality Directive") and Article 5 of Council Directive (EU) 2015/652 laying down calculation methods and reporting requirements pursuant to Directive 98/70/EC 2 , Member States are required to report annually on the greenhouse gas (GHG) intensity of fuels and energy supplied in their territories. This reporting obligation applies for the first time for the reporting year 2017, following the application and transposition of Council Directive (EU) 2015/652.

Furthermore, pusuant to Article 8(3) of Directive 98/70/EC Member States are required to report on national fuel quality data for the preceding calendar year..

This annual report summarises the information provided by Member States in relation to the above-mentioned reporting requirements. It is based on the data submitted by Member States to the European Environment Agency (EEA) for the year 2017.

Article 7a of the Fuel Quality Directive, in conjunction with the Council Directive (EU) 2015/652, sets out reporting requirements concerning the following:

·the total volume of each type of fuel or energy supplied for road transport and non-road mobile machinery (including inland waterway vessels when not at sea), agricultural and forestry tractors, and recreational craft when not at sea;

·the life cycle GHG emissions per unit of energy, including the provisional mean values of the estimated indirect land use change (ILUC) emissions from biofuels 3 .

·the feedstock and the biofuel production pathway used for each of the biofuels supplied on the territories of Member States.

The Fuel Quality Directive obliges Member States to require fuel suppliers to reduce the life cycle GHG intensity of transport fuels, i.e. the life cycle GHG emissions per unit of energy from fuel and energy supplied, by a minimum of 6 % by 31 December 2020 compared with the fuel baseline standard for 2010 of 94,1 gCO2eq/MJ 4 . ILUC GHG emissions are not taken into account in assessing compliance with the minimum 6% reduction target.

Given that 2017 is the first reporting year, and the transposition of Council Directive (EU) 2015/652 was delayed in many Member States, this first report on the volumes and life cycle greenhouse gas intensity of fuel and energy types is not yet complete. A total of 22 Member States as well as Iceland and Norway, provided corresponding data in the appropriate format. Estonia, Lithuania, Poland, Portugal, Romania and Spain submitted reports on the quality of the fuels placed on the market by fuel suppliers but not on their greenhouse gas intensity 5 .

According to the data provided, the average GHG intensity of the fuels and energy supplied in the 22 reporting Member States in 2017 was 3.4 % lower than the 2010 baseline. This corresponds to a saving of 29 Mt carbon dioxide equivalent (CO2eq) in the year 2017.

To ensure the delivery of the minimum 6 % reduction target by 2020, the Fuel Quality Directive specifies that Member States may require fuel suppliers to comply with an intermediate reduction target of 4 % for the year 2017.

Using this as a reference to assess the progress achieved indicates that, in 2017, EU fuel suppliers in the 22 reporting Member States were on average behind their objective of reducing the GHG intensity of transport fuels by 6 % by 2020, compared with 2010 (Figure 1). It is to be noted that in 2017 no upstream emission reductions (UER) 6 were reported. These are expected to contribute to the reduction target in the year 2020 for which they have to be reported.

The progress achieved by fuel suppliers varies greatly across Member States. In 5 of the 22 reporting Member States, reductions were equal to or greater than 4 %, with Sweden being the only Member State having already exceeded the 6 % reduction target for 2020. Therefore, almost all Member States need to take swiftly further action to ensure that the 2020 target is met.

Taking ILUC emissions into account 7 , the average GHG intensity of the fuels consumed in 2017 was 2.3 % lower than in 2010. This corresponds to a saving of slightly less than 20 Mt CO2eq in the year 2017. ILUC emissions are not taken into account in assessing compliance with the minimum 6% reduction target. 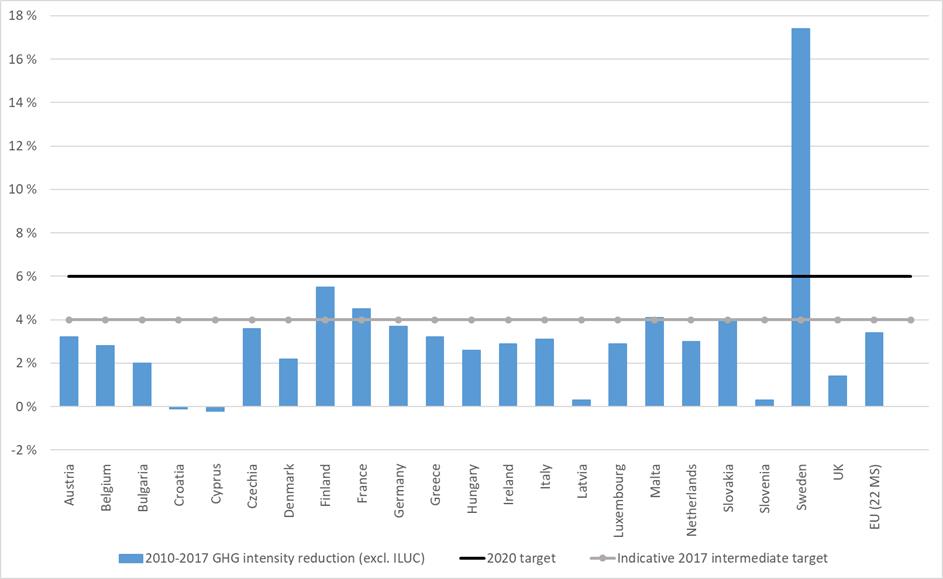 This section provides the data submitted for the first time by 22 reporting Member States on all fossil fuels, biofuels and fuels of non-biological origin within the scope of the Fuel Quality Directive for road transport and non-road mobile machinery.

Total fuel supply reported was 8 976 petajoules (PJ), of which 95.5 % was from fossil fuels, and 4.5 % was from biofuels. No renewable fuels of non-biological origin were reported in 2017. 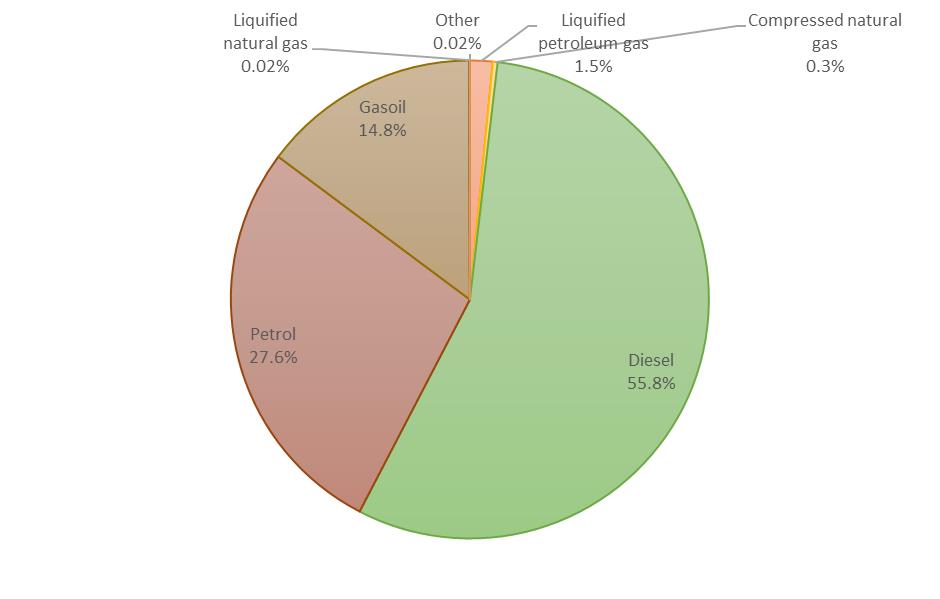 The biofuels consumption in the 22 reporting Member States was dominated by biodiesel (fatty acid methyl ester, FAME) (62.3 %; 267 PJ), followed by bioethanol (17.5 %; 75 PJ) and hydrotreated vegetable oil (HVO; 16.6 %; 71 PJ). Bio-ethyl tert-butyl ether (bio-ETBE) and biogas account for almost 3 % (12 PJ). All other biofuels represented a much smaller share (about 1 %). Detailed information for all biofuels and pathways can be found in the EEA Technical report on ‘Quality and greenhouse gas intensities of transport fuels in the EU in 2017’. 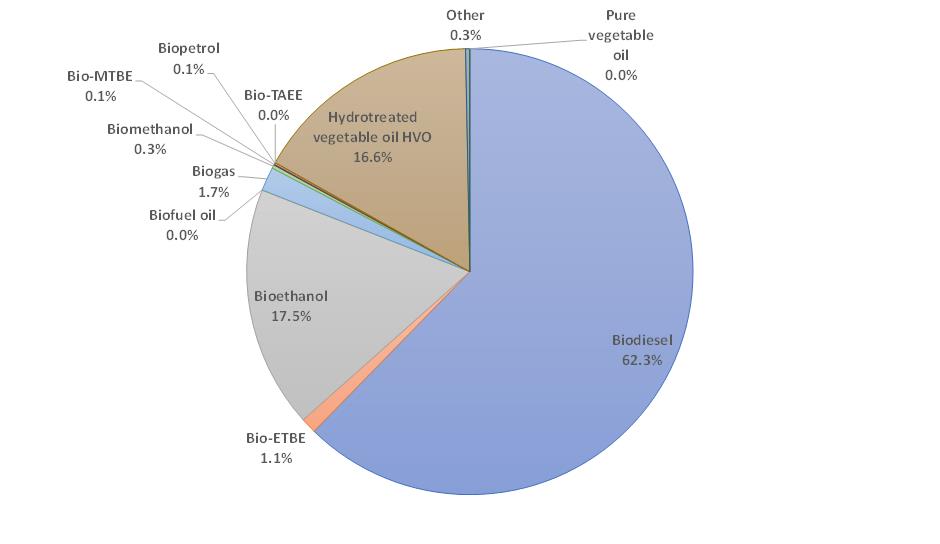 Only seven Member States reported the electricity consumed by electric vehicles and motorcycles (1.2 PJ in total). As this reporting by fuel suppliers is voluntary, the reported quantity of electricity was below the actually consumed quantity in 2017.

According to Article 8 of the Fuel Quality Directive, all Member States, as well as Iceland, submitted reports on national fuel quality data for the year 2017.

This section provides the data for petrol and diesel sales, and the bio-components included therein, for road transport reported by all EU Member States. It excludes other fossil fuels, other biofuels and fuels of non-biological origin, as well as fuels used for non-road mobile machinery.

The share of diesel as compared with petrol sales has increased over the years, from 55.6 % of total sales in 2001 to 72.3 % in 2017. This reflects to a large degree the increasing dieselisation of Europe’s vehicle fleet during that period. While sales of diesel fuel increased by almost 9 % between 2007 and 2017, sales of petrol fuels decreased by 9 % during the same 10-year period.

Diesel fuel consumption is significant in most EU Member States, representing more than 60 % of total fuel sales in 23 Member States (all except Cyprus, Greece, Malta and the Netherlands; Romania did not submit a complete report for 2017).

All Member States described the actions taken when non-compliant samples were identified. These included informing the competent authorities, initiating investigations, imposing penalties and fines, and resampling. In a small number of cases, no action has been taken where the non-compliant parameters were found to be very close to the tolerance limits.

There was therefore no need for the Commission to launch any new investigation in this area.

Council Directive (EU) 2015/652 of 20 April 2015 laying down calculation methods and reporting requirements pursuant to Directive 98/70/EC of the European Parliament and of the Council relating to the quality of petrol and diesel fuels, OJ L 107 of 25.4.2015.

Council Directive (EU) 2015/652 of 20 April 2015 laying down calculation methods and reporting requirements pursuant to Directive 98/70/EC of the European Parliament and of the Council relating to the quality of petrol and diesel fuels, OJ L 107 of 25.4.2015.

The European Commission is following up on the correct and complete transposition of Council Directive (EU) 2015/652 to ensure its correct implementation.

‘upstream emissions’ means all greenhouse gas emissions occurring prior to the raw material entering a refinery or a processing plant where the fuel is produced.

For this calculation, the provisional estimated indirect land-use change emissions from biofuels were taken into account as listed in Annex V of the Fuel Quality Directive.