Having regard to Regulation (EC) No 881/2004 of the European Parliament and of the Council of 29 April 2004 establishing a European Railway Agency (Agency Regulation) (2) and in particular Article 7 thereof,

Safety certificates issued in accordance with Article 10(2)(a) of Directive 2004/49/EC (Part A Certificate) shall use the standard format set out in Annex I to this Regulation.

This format shall be used whenever a Part A Certificate is issued, renewed, updated, amended or revoked.

Safety certificates issued in accordance with Article 10(2)(b) of Directive 2004/49/EC (Part B Certificate) shall use the standard format set out in Annex II to this Regulation.

This format shall be used whenever a Part B Certificate is issued, renewed, updated, amended or revoked.

Applications for Part A and/or Part B Certificates submitted in accordance with Articles 10 and 12 of Directive 2004/49/EC shall be in the standard format set out in Annex III to this Regulation.

The application form shall be filled out according to the guidelines described in Annex III to this Regulation.

Each Safety Certificate shall be given a unique number, in accordance with the protocol described in Annex IV of this Regulation.

The safety authority shall inform the Agency of the issue, renewal, amendment or revocation of all Part A and Part B safety certificates issued in accordance with Article 10(2) of Directive 2004/49/EC.

The amendment, updating or renewal of a safety certificate issued under Directive 2001/14/EC shall be done in accordance with the present Regulation and Directive 2004/49/EC.

This Regulation shall enter into force on the day following its publication in the Official Journal of the European Union. 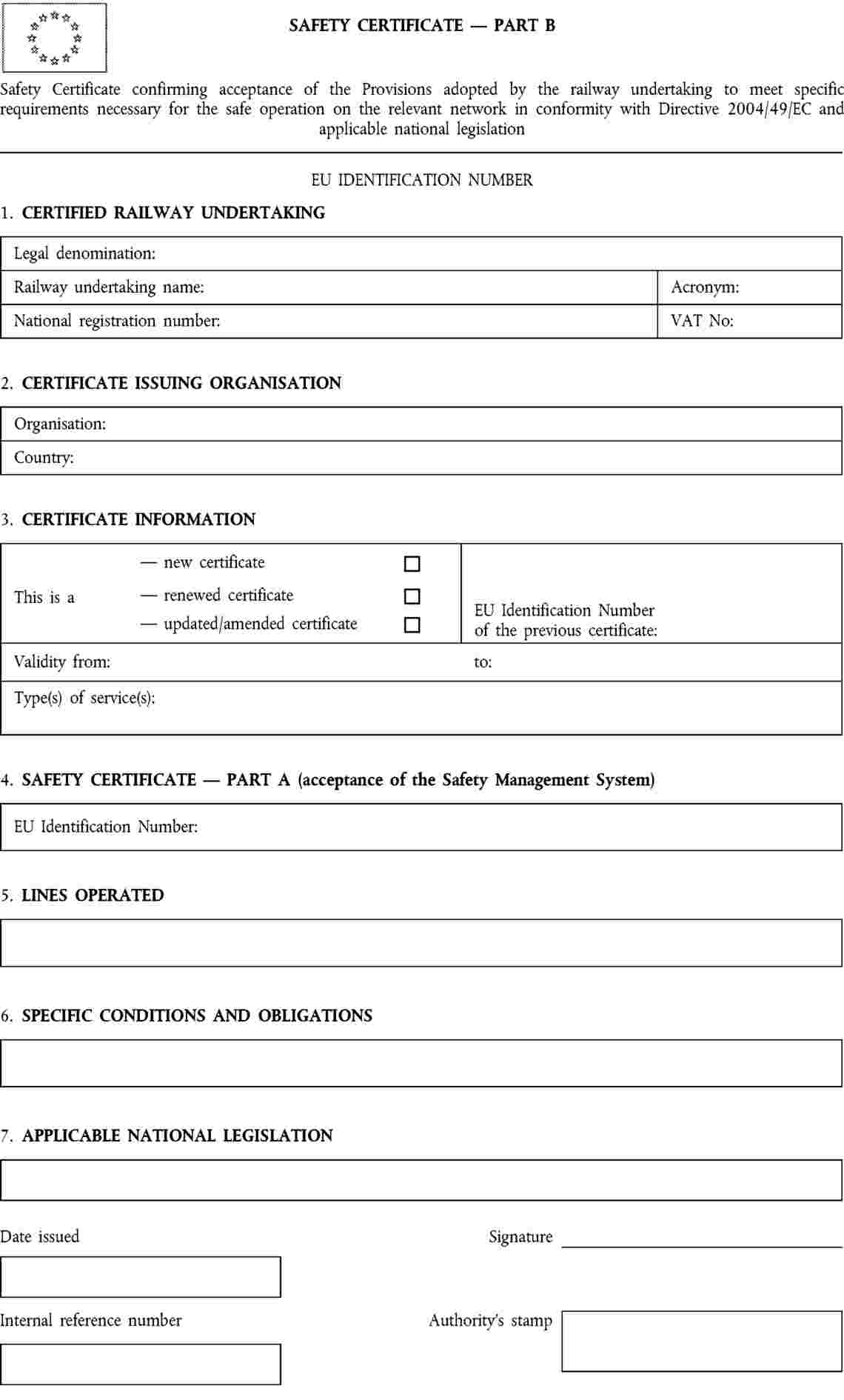 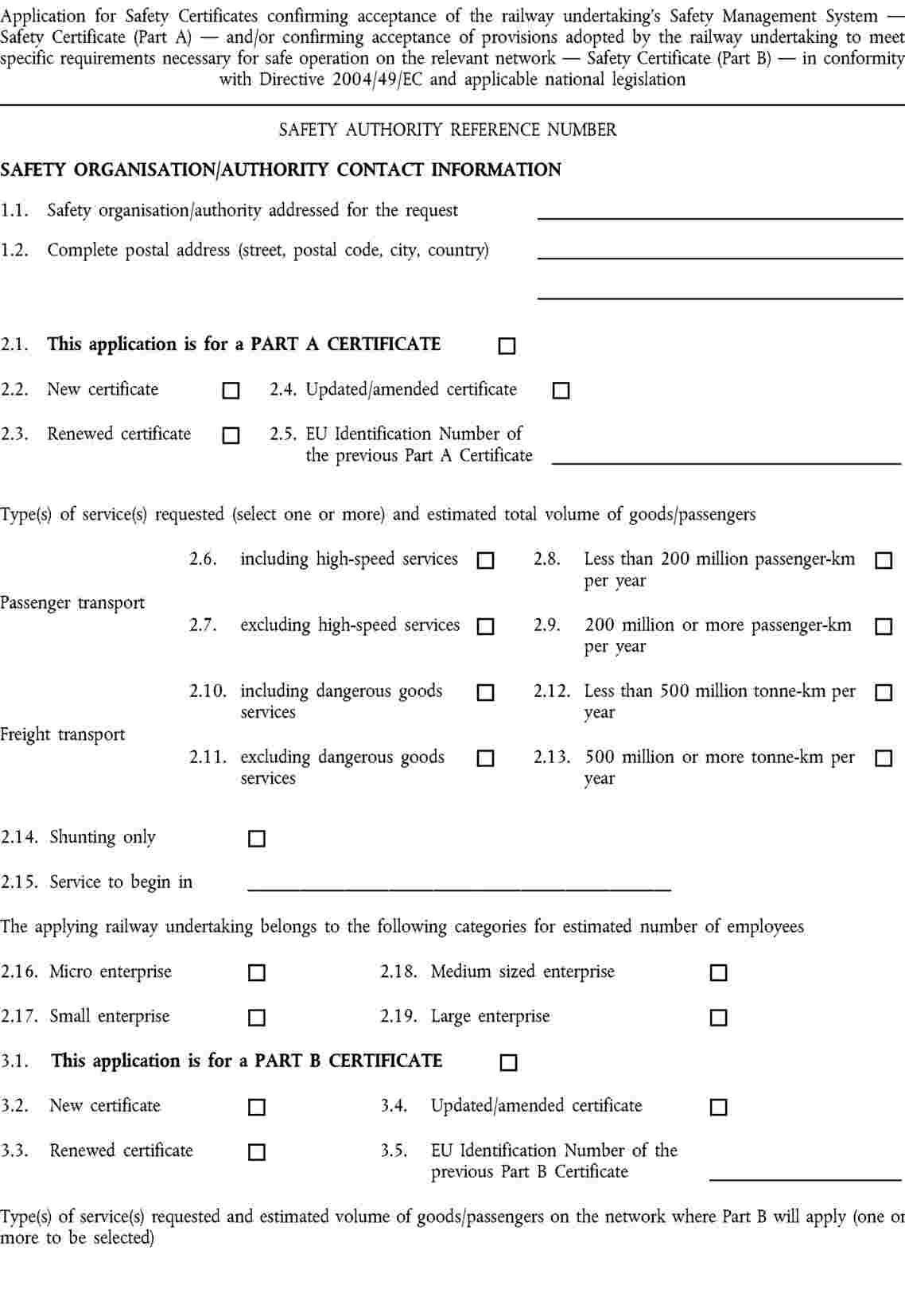 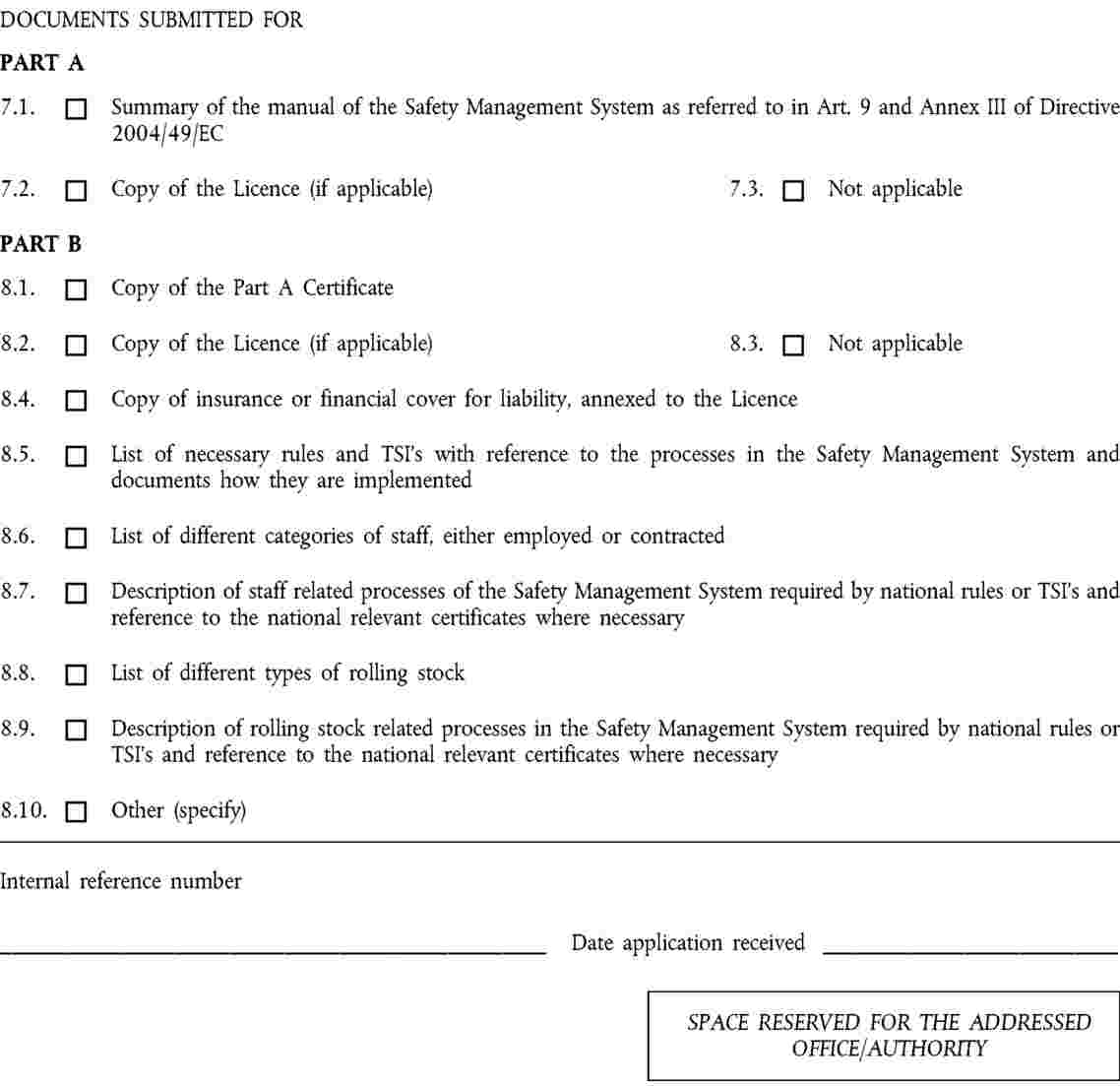 This Application Form is to be used by railway undertakings (also referred to as ‘the applicant’) applying for a Safety Certificate Part A and/or Part B (Article 10(1) — Directive 2004/49/EC). References in this document are made, unless otherwise mentioned, to Articles in Directive 2004/49/EC.

A railway undertaking applying for either one of these certificates or for both may use this Application Form to forward its request to the competent issuing safety authority/organisation. Its use will enable the authority to process the request without undue delay and however within the terms fixed in Article 12(1).

All fields in the form should be completed and applicable information provided by the railway undertaking.

Safety Certificates Part A and Part B

This document allows a railway undertaking to apply, at the same time, both for Part A and Part B Certificates or just for one of them using the same form; it can be used to request either a new, renewed or updated/amended Part A and/or Part B Certificate (as defined in Article 10(5)).

It is possible to apply only for a new Part A Certificate and, with a second application, later for the first Part B Certificate.

If applying only for a Part B Certificate, it is necessary to hold a valid Part A Certificate.

Type and extent of railway operations

According to Article 10(5), a Safety Certificate shall be wholly or partly updated whenever the type or extent of the operation is substantially altered and the holder shall without delay inform the competent safety authority of all major changes in the conditions of the relevant part of the Safety Certificate. Therefore it is important, for the safety authority to know and for the railway undertaking to establish ‘type’ and ‘extent’ of railway services.

‘Type’ and ‘extent’, form the basis for the Community validity of the Part A Certificate and provide reference to define ‘equivalent rail transport operations’ (Article 10(3)) throughout the Community.

All information contained in fields 2.6 to 2.19 and 3.6 to 3.16 is necessary to establish if services intended to be operated with the requested Safety Certificate are equivalent or not to other rail transport operations already carried out by the applicant under previously held valid certificate(s).

Page 3 of the Application Form is intended as a reminder of the documents that must accompany each application. It shall be used as a reference list both for the applicant and for the issuing organisation/authority and therefore be used as the front page of the annexes to the application form (each box must be checked according to the specific cases).

For easy reference and guidance, each field in the Application Form has been numbered and explained in the following pages.

A person authorised to approve the request submitted with the Application Form shall sign the document, in the appropriate space, delivered to the safety organisation/authority. The name of the signing person shall also be spelled out.

EXPLANATIONS AND INSTRUCTIONS FOR USE

Explanation of the structure of the European Identification Number (EIN)

The country codes are those officially published and updated on the European website in the Interinstitutional style guide and are based on the standard ISO 3166 alpha-2.

The Channel Tunnel Safety Authority, currently the only existing multinational safety authority, will be identified through the following two letter code:

Two digits allow identifying the type of document: the first digit identifies the general classification of the document, whether it is a Safety Certificate (number 1) or any other kind of document (number different from 1); the second digit specifies the subtype of document, whether it is a Part A (number 1) or Part B (number 2) Certificate. For now, possible combinations in the numbers would reflect just two cases of interest and use:

With the need for other codes this numbering system can be extended. Following is the proposed list of known, possible combinations of two digit numbers in relation to the type of document considered:

This field indicates the year (in the specified format yyyy, i.e. 4 digits) in which the certificate has been issued.

Every year the counter shall restart from zero.