on the braking of two or three-wheel motor vehicles

Having regard to Council Directive 92/61/EEC of 30 June 1992 relating to the type-approval of two or three-wheel motor vehicles (1),

Whereas measures should be adopted which are intended gradually to establish the internal market within a period expiring on 31 December 1992; whereas the internal market comprises an area without internal frontiers in which the free movement of goods, persons, services and capital is ensured;

Whereas, with regard to braking, in each Member State two or three-wheel vehicles must display certain technical characteristics laid down by mandatory provisions which differ from one Member State to another; whereas, as a result of their differences, such provisions constitute barriers to trade within the Community;

Whereas these barriers to the establishment and operation of the internal market may be removed if the same requirements are adopted by all the Member States in place of their national rules;

Whereas it is necessary to draw up harmonized requirements concerning the braking of two or three-wheel motor vehicles in order to enable the type-approval and component type-approval procedures laid down in Directive 92/61/EEC to be applied for each type of such vehicle;

Whereas in order to facilitate access to the markets of non-Community countries it is necessary to establish equivalence between the requirements of this Directive and those of United Nations ECE Regulation No 78,

This Directive applies to the braking of all types of vehicle as defined in Article 1 of Directive 92/61/EEC.

The procedure for the granting of component type-approval in respect of the braking of a type of two or three-wheel motor vehicle and the conditions governing the free movement of such vehicles shall be as laid down in Chapters II and III of Directive 92/61/EEC.

In accordance with Article 11 of Directive 92/61/EEC, equivalence between the requirements laid down in this Directive and those laid down in United Nations ECE Regulation No 78 (E/ECE/324 and E/ECE(TRANS/505 REV 1 ADD 77 of 20 October 1988) is hereby acknowledged.

1.   Member States shall adopt and publish the provisions necessary to comply with this Directive before 5 October 1994 and shall forthwith inform the Commission thereof.

From the date mentioned in the first subparagraph Member States may not, for reasons connected with braking, prohibit the initial entry into service of vehicles which conform to this Directive.

They shall apply the provisions referred to in the first suparagraph as from 5 April 1995.

2.   Member States shall communicate to the Commission the texts of the provisions of national law which they adopt in the field covered by this Directive.

1.1.   Type of vehicle with respect to its braking:

means vehicles which do not differ in such essential respects as:

means the combination of parts other than the engine whose function is progressively to reduce the speed of a moving vehicle or to bring it to a halt, or to keep it stationary if it is already halted; these functions are specified in 2.1.2. The device consists of the control, the transmission and the brake proper.

means the part actuated directly by the driver to furnish to the transmission the energy required for braking, or for controlling it. This energy may be the muscular energy of the driver, or energy of another source controlled by the driver, or a combination of these various kinds of energy.

means the combination of components comprised between the control and the brakes and linking them functionally. Where the braking power is derived from or assisted by a source of energy independent of the driver but controlled by him, the reserve of energy in the device is likewise part of the transmission.

means the parts of the braking device in which the forces opposing the movement of the vehicle are developed.

means devices which differ in such essential respects as:

means one or more of the individual parts which, when assembled, constitute the braking device.

means braking during which, within the normal operating range of the device, and whether during the application or during release of the brakes:

means the speed which the vehicle cannot exceed, on the level and without undue external influence, taking into account any special limitations imposed on the design and construction of the vehicle.

means, except where otherwise stated, a vehicle so laden as to attain its maximum mass.

means the vehicle alone, as submitted for the tests, plus the driver alone and any necessary test equipment or instrumentation.

means a brake or brakes which has/have been treated in accordance with Section 1.3 of Appendix 1.

The braking device defined in 1.2 must fulfil the following conditions:

The service braking must make it possible to control the movement of the vehicle and to halt it safely, speedily and effectively, whatever its speed and load, on any up or down gradient. It must be possible to graduate this braking action. The driver must be able to achieve this braking action from his driving seat without removing his hands from the steering control.

The secondary (emergency) braking must make it possible to halt the vehicle within a reasonable distance in the event of failure of the service braking. It must be possible to graduate this braking action. The driver must be able to obtain this braking action from his driving seat while keeping at least one hand on the steering control. For the purposes of these provisions it is assumed that not more than one failure of the service braking can occur at one time.

The parking brake must make it possible to halt the vehicle stationary on up or down gradient even in the absence of the driver, the working parts being then held in the locked position by a purely mechanical device. The driver must be able to achieve this braking action from his driving seat.

1.2.3.   Type-0 test with engine connected for motorcycles (with or without sidecar) and trycicles 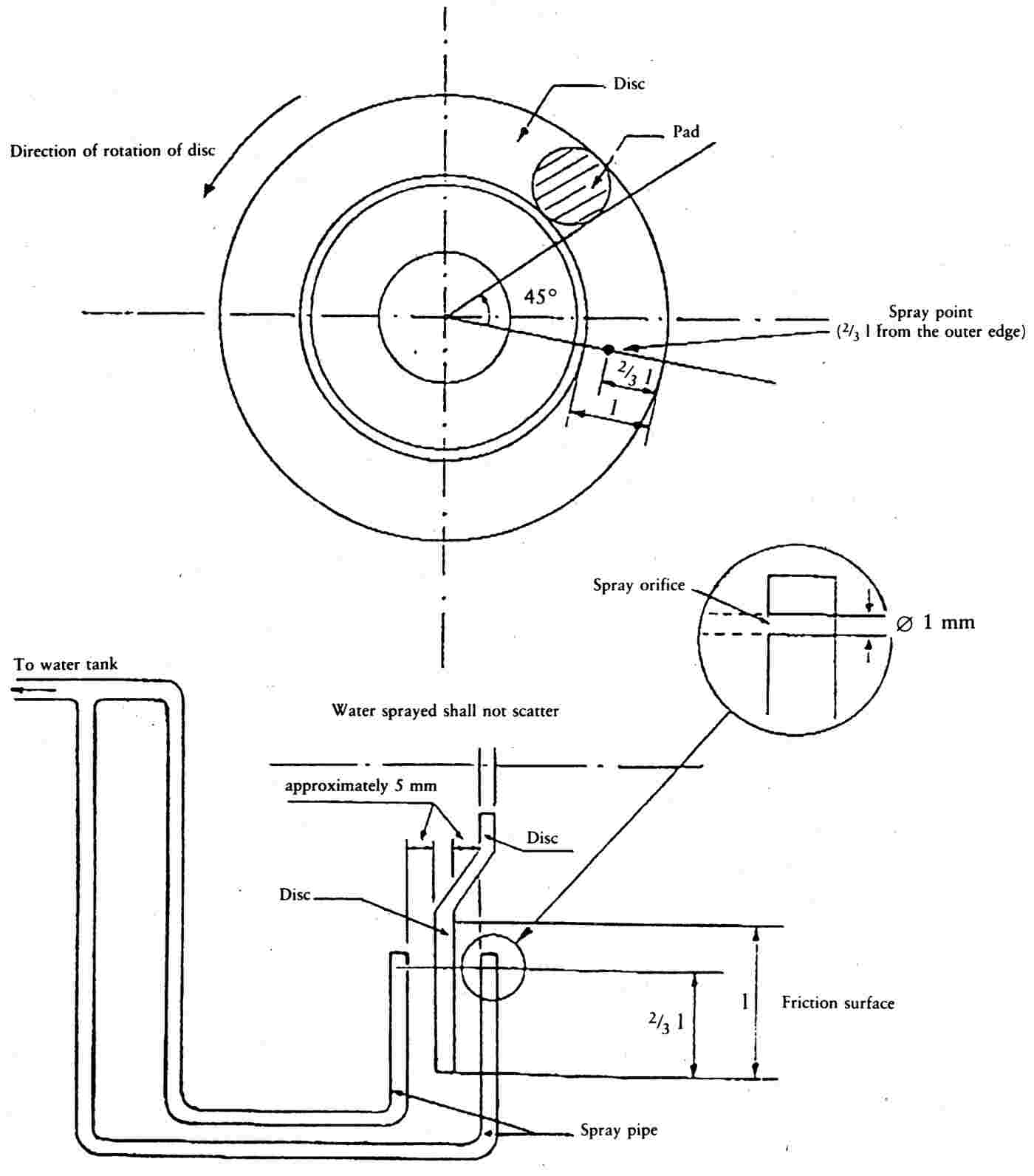 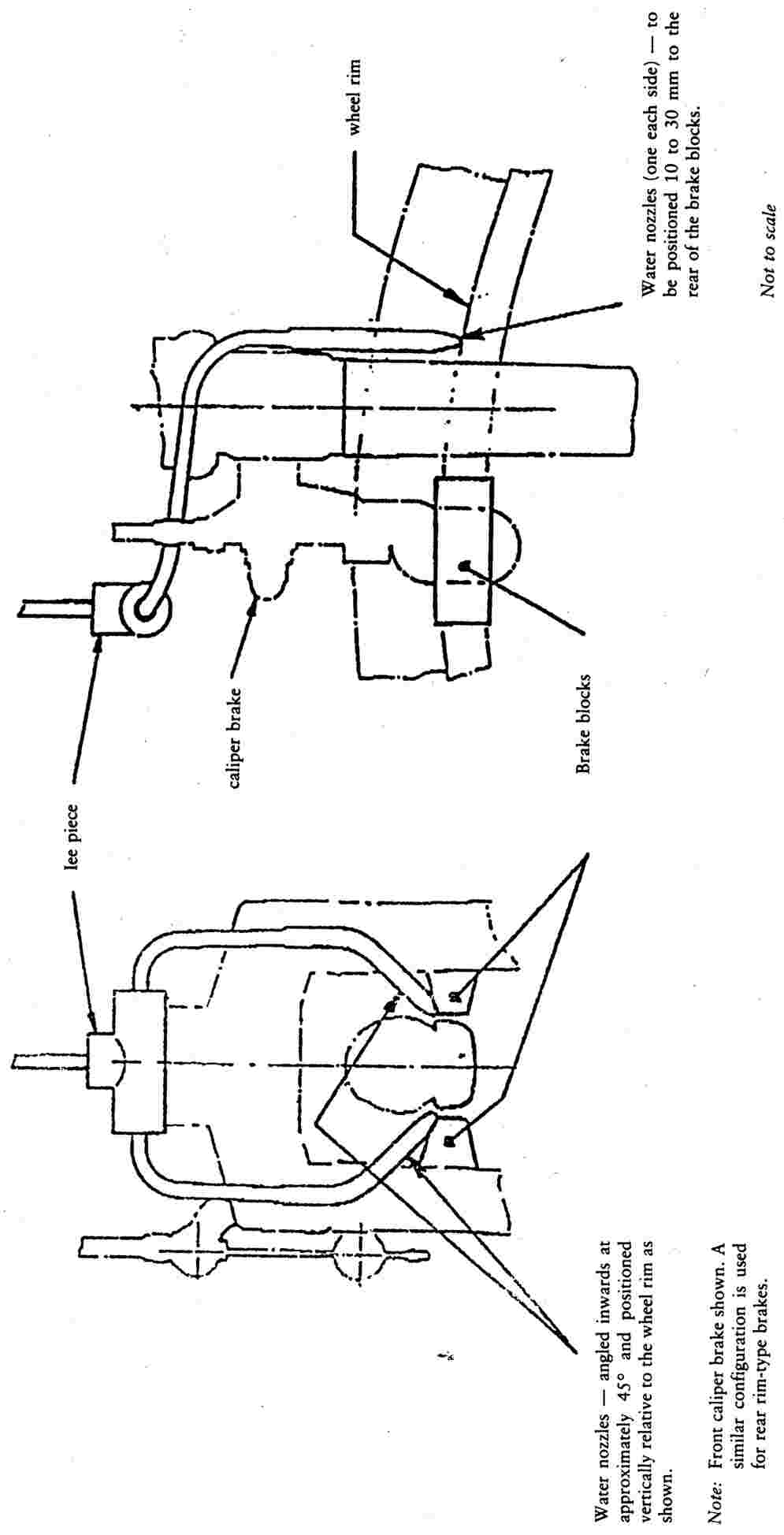 2.1.   Provisions relating to tests of vehicles with braking devices operating on the wheel or wheels of the front or rear axle only:

2.1.2.   Braking performance with the vehicle laden

2.1.3.   Braking performance with the vehicle unladen

2.2.   Provisions relating to tests of vehicles of which (at least) one of the braking devices is a combined braking system

2.2.3.2.   Braking with the second service or the secondary (emergency) braking device, all categories

The stopping distance is:

2.3.   Braking performance with the parking braking device (if applicable)

2.5.   Performance levels (minimum and maximum) to be attained with wet brakes

(2)  For mopeds with a maximum speed of 25 km/h or lower which have a wheel rim of 45 mm or less (code 1,75), this value is 2,8 or S ≤ 0,1 + V2/73. If this value cannot be achieved by each braking device because of limited adhesion, the value 4,0 m/s2 must be applied for a test on a laden vehicle using both braking devices simultaneously.

(3)  If these values for single braking devices cannot be achieved because of limited adhesion the following values shall be substituted for a test with the vehicle laden using both braking devices together:

(4)  If these values for single braking devices cannot be achieved because of limited adhesion, the following values are substituted for a test with the vehicle laden using both braking devices together:

For the purposes of this Appendix:

means a component of a service braking system which automatically controls the degree of slip, in the direction of rotation of the wheel(s) on one or more wheels of the vehicle during braking.

means a component designed to identify and transmit to the controller the conditions of rotation of the wheel(s) or the dynamic conditions of the vehicle.

means a component designed to evaluate the data transmitted by the sensor(s) and to transmit a signal to the modulator.

means a component designed to vary the braking force(s) in accordance with the signal received from the controller.

3.   NATURE AND CHARACTERISTICS OF THE SYSTEM

(1)  The technical service should examine the electronic controller and/or any drive system with regard to possible failure modes.

(3)  For two-wheel mopeds, until a minimum value for ε has been established, the measured value must be recorded in the test report.

(4)  Full force means the maximum force prescribed in Section 2.4, Appendix 1 for the category of vehicle: a higher force may be used if required to actuate the anti-lock device.

1.   DETERMINATION OF THE COEFFICIENT OF ADHESION (K)

2.   DETERMINATION OF THE ADHESION UTILIZATION (ε).

(1)  Additional requirements may have to be established in the case of vehicles equipped with combined braking systems.

(2)  As an initial step, to facilitate these preliminary tests, the maximum control force applied before the critical point may be obtained for each individual wheel. 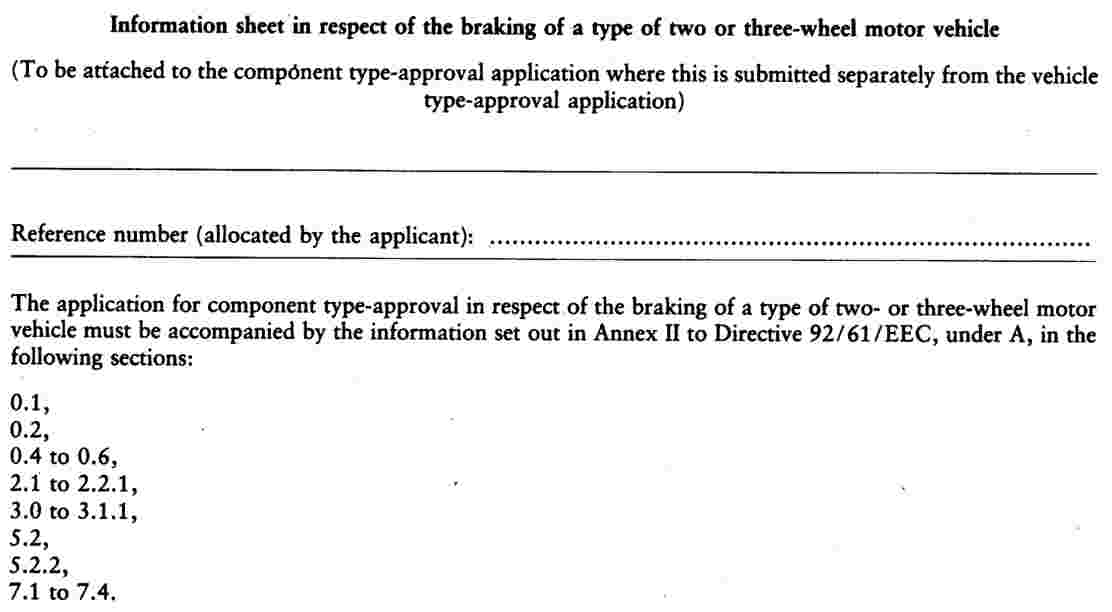 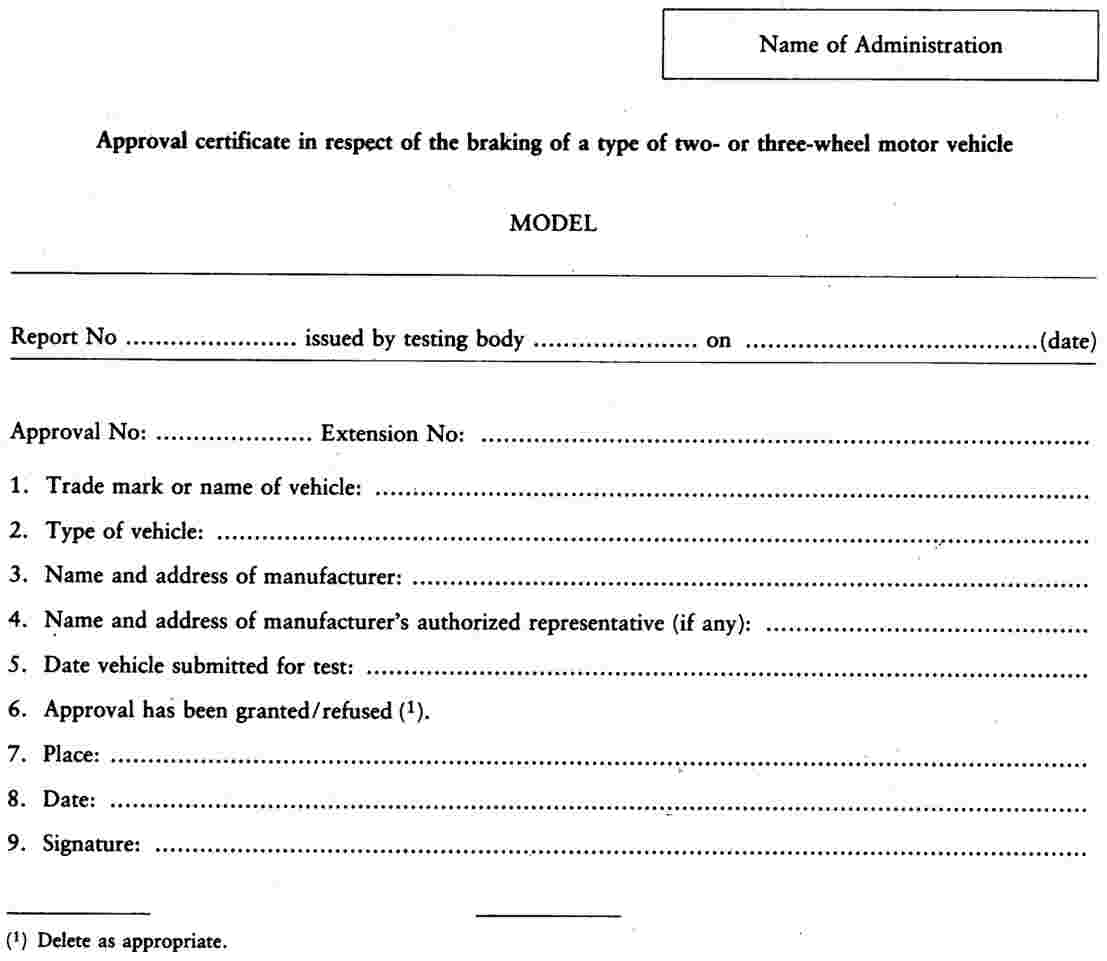