on an Action Plan for the Development of Organic Production

The roadmap consultation ran from 4 September to 23 October 2020, and the open public consultation was carried out between 4 September and 27 November 2020, via the website of the European Commission in all official EU languages. The consultations aimed at gathering information and feedback from EU citizens and relevant stakeholders (public authorities, businesses and their associations, NGOs, research and academic institutions) as input into the finalisation of the Action Plan.

Targeted consultation activities were also carried out with the competent authorities of the EU Member States responsible for organic production (at different meetings of the Committee on Organic Production); with business and professional organisations having activities at EU level in the organic sector (producers, retails, processors); with EU citizens and consumer organisations and with civil society organisations active at EU level in organic farming (e.g. meeting of the Civil Dialogue Group); and with several non-EU countries.

A total of 124 replies were received on the roadmap consultation. EU citizens provided most contributions to this consultation, accounting for 33% of all respondents (41 responses), followed by business associations (23% - 28 responses) and company/business organisations (19% - 23 responses). NGOs submitted 16 responses (13%), public authorities accounted for 3 replies (2%), academic/research institutions and trade unions participated with 2 replies each (2%) and 1 reply came from a non-EU citizen. The remaining 6% (8 responses) of respondents identified themselves as ‘other’.

The open public consultation attracted 841 replies, of which one response was a duplicate, resulting in 840 responses being considered for the assessment of replies to the consultation.

Figure 1. Number of respondents to the public consultation by country of origin 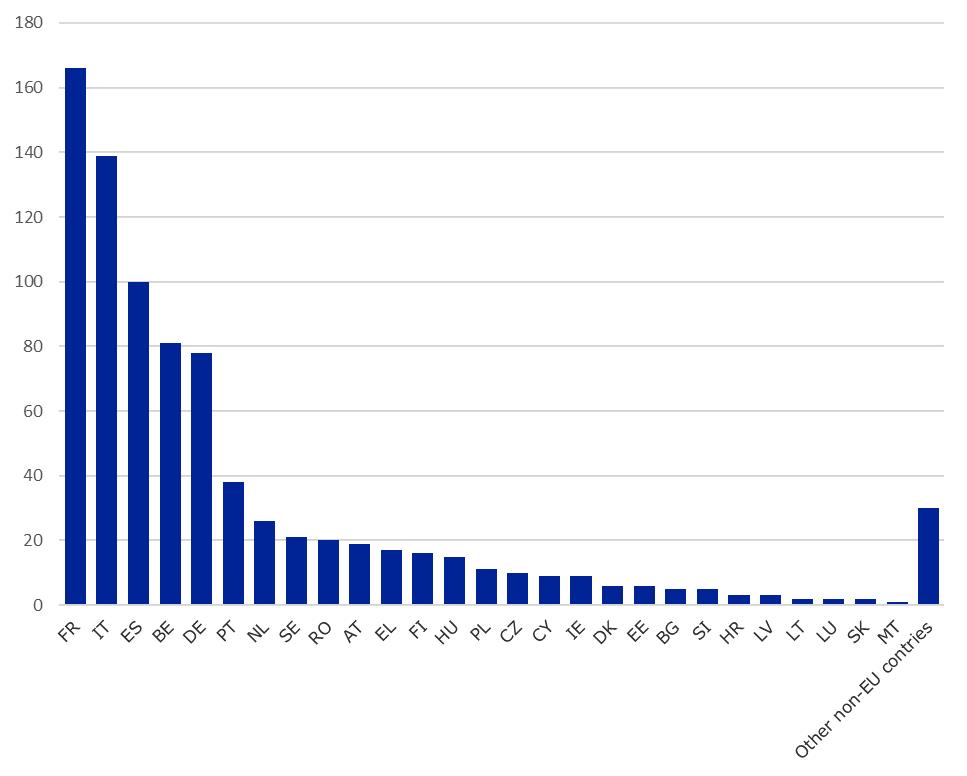 Results for the closed and open questions of the public consultation

More than three quarter of the respondents (78%) recognised the presence of obstacles to greater production and consumption of organic food in the EU (sum of respondents that indicated “strongly disagree” or “somewhat disagree” for the option “I don’t see any problems”). The obstacles perceived as most important (sum of “strongly agree” and “somewhat agree”) were “Insufficient financial incentives for producers to convert to organic production” (76%), followed by “Competition with other ways of producing and/or other schemes” (74%) and “Low consumer awareness of the benefits of organic production for climate and the environment” (73%).

Figure 2. Obstacles to greater production and consumption of organic food in the EU today 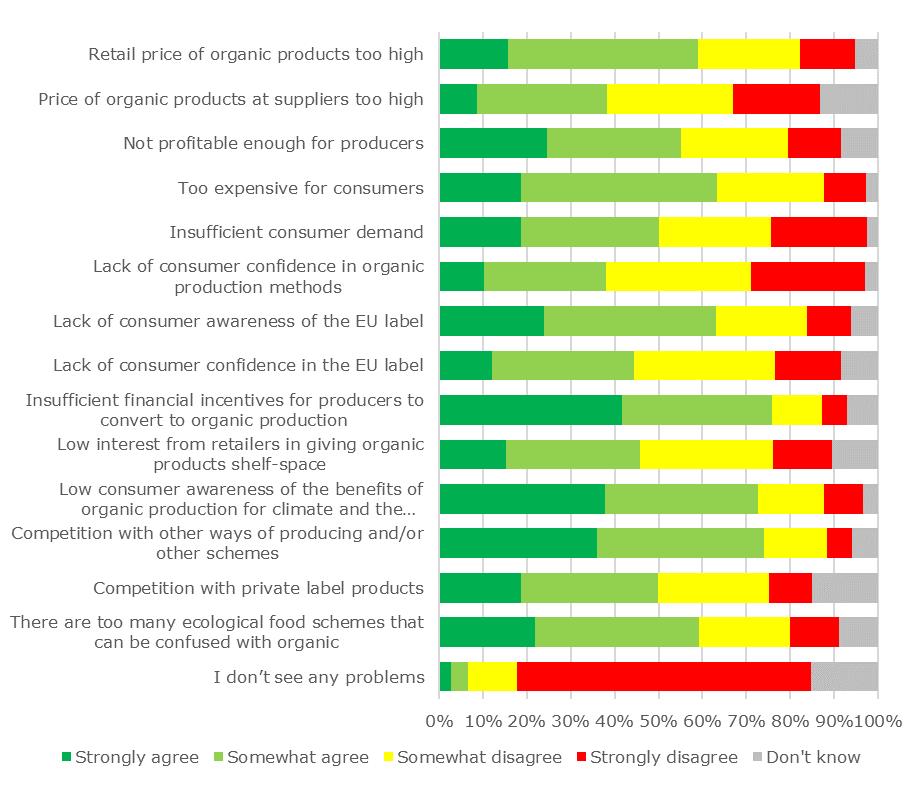 A majority of respondents (63%) considered organic food too expensive for consumers and reported a lack of consumer awareness of the EU label (63%) together with the presence of too many ecological food schemes that can be confused with organics (59%). When asked about other existing obstacles to the greater production and consumption of organic food in the EU, respondents identified the price of conventional products as the first obstacle (43 mentions). A lack of trust in the EU organic label and of information about the health and environmental benefits of organic farming were also identified as obstacles by 12 and 11 respondents.

Figure 3. Measures important to stimulate the production of organic products 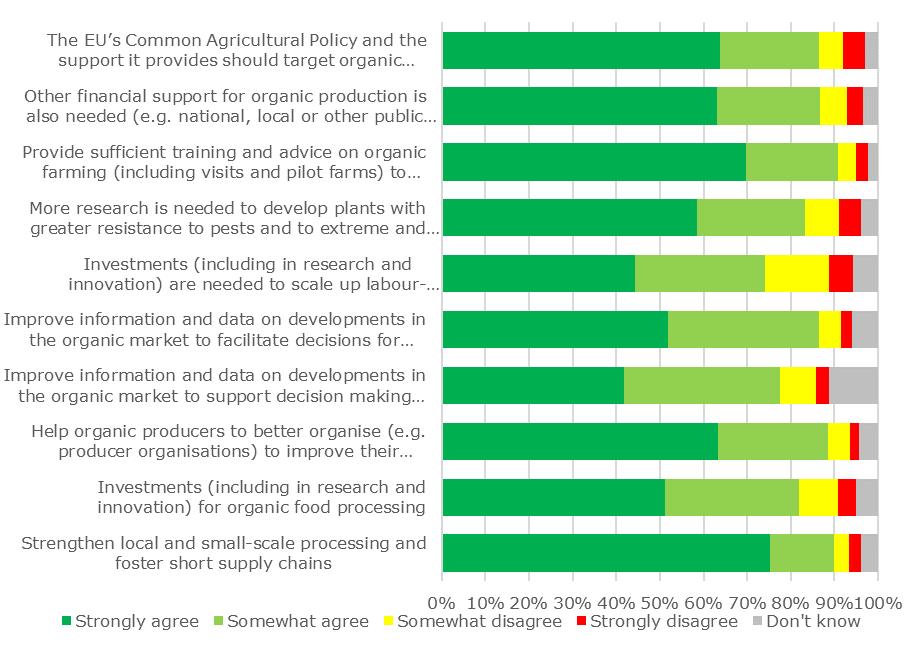 Overall, there was a high level of agreement on the nine actions proposed for developing the organic production sector in the EU (from 57% to 91%). There was a large consensus (91% of the replies) on raising awareness of the environmental and climate benefits of organic farming. The level of support was above 80% for four actions: (i) school schemes to promote healthy diets (83%), (ii) organic products in public/private offices and canteens (83%), (iii) increasing the visibility and choice of organic products at retailers (83%), and (iv) more public procurement of organic products (81%). Two actions related to promotion were supported by more than three quarters of the respondents: information campaigns on the EU organic logo (78%) and targeting promotion campaigns of agricultural products on organic products (77%). The price competitiveness of organic products should be improved for 76% of the participants. Finally, 57% of the respondents indicated that the EU organic logo is not sufficiently recognised. When asked about other actions to develop the organic production sector in the EU, respondents first mentioned the need to inform consumers better (47 mentions), particularly on the health (12) and social (9) benefits of organic farming. The need to inform about, and apply, the true costs (taking account of externalities) of conventional agriculture was also a recurring action mentioned (37) and public procurement was identified as a positive factor to increase demand for organic products (27 mentions).

There was a high level of agreement on the seven actions proposed for improving consumer confidence in the organic production sector in the EU (from 70% to 92%). There was a large consensus (91% of the replies) that information on organic producers should be transparent and available for consumers and that actions are needed to help consumers clearly distinguish between the EU organic logo and other environmental/quality schemes. It should be easier to trace organic products back to their origin for 88% of respondents and more effort is needed to tackle fraud in the organic sector for 84% of respondents. There is also a need to further explore the reasons for the lack of consumer confidence (86%) and for more effort to tackle fraud in the organic sector (84%). Finally, respondents stated that compliance with the rules for organic production must be better controlled by public authorities (77%) and information technologies should be used more often to improve the tracing of organic products (70%). When asked about other important actions to improve consumer confidence in the organic production sector in the EU, respondents identified the need for more transparency and for more efforts to tackle fraud, especially in third countries, as the most important actions (35 mentions). Informing consumers (23) and combining the EU organic label with a local/origin label (18) were also mentioned. Respondents were more divided on the need for more controls: 21 mentioned that controls are already sufficient while 10 mentioned the need to increase them.

Like for the previous question, there was a large consensus supporting the actions proposed for stimulating the production of organic products (from 74% to 91% of the replies). The largest share of respondents agreed that, in order to stimulate conversion from conventional to organic farming, it is important to provide sufficient training and advice (91%) and that it is necessary to strengthen local and small-scale processing and foster short supply chains (90%). Respondents recognised the need for organic producers to receive help to better organise (e.g. in producer organisations) to improve their bargaining power in the supply chain (88%). There is also a need to improve information and data on developments in the organic market to facilitate decisions for producers (87%). They agreed on the fact that organic production should benefit from financial support, including from the Common Agricultural Policy.

Concerning the question on the organic animal production sector, respondents agreed that “Producers should be helped to find appropriate organic feed for animal nutrition” (86%) and that “More research is needed to identify and develop best practices on feeding methods suitable for organic feed, and alternative feeding ingredients” (82%). A similar level of agreement applied to the opinion that “Organic animal production should benefit from specific support” (82%), followed by “Aquaculture should be supported to gain more knowledge on breeding and feeding methods, including through research” (78%).

Regarding the question on the main environmental advantages of organic production, respondents identified the beneficial effects of organic production in relation to biodiversity (92%), the protection of soil quality (88%) and of water quality (84%). Organic production promotes a circular economy for 83% of the respondents and it ensures a responsible use of energy and natural resources for 80%. It promotes carbon neutrality, it allows for adaptation to a changing climate and it helps reduce air pollution for 78% of the participants.

There was a consensus that the “development of the organic sector requires a mix of EU and Member State support as well as private initiative”. More than 70% of respondents agreed with this statement strongly, and another 23% agreed at least somewhat. Mirroring this statement, 84% of the respondents strongly disagreed (63%) or somewhat disagreed (21%) with the idea of leaving the development of the organic sector to the market alone. The response patterns suggest that more than half of the respondents (59%) see national authorities as mainly responsible for promoting organic production. When asked about any other additional actions to strengthen the production and consumption of organic food, respondents suggested to re-balance the costs between conventional and organic products (36 mentions), improve the income and working conditions for farmers (29) and identified the need of research to foster innovation (23).

Respondents also identified as important the need to assist farmers in accessing markets as a way to support the organic sector (15), improving biodiversity on farms (13), further supporting farmers during conversion (11) and conducting research on the impacts of organic agriculture (11).

Finally, additional actions related to education on organic farming (9), support for small scale farming (8) and developing farm advisory services (5) were mentioned and concerns were raised regarding the power of retailers (6).

As for the different themes in the Action Plan, all of them are to varying extent supported by the quantitative and qualitative inputs from the open public consultation:

·All 15 themes received strong support or support in the quantitative responses. Among all themes, a slightly lesser degree of support was given to Themes 1.1 ‘Promoting the EU Logo’; 1.4 ‘Preventing food fraud and enhancing controls’; 2.3 ‘Supporting the organisation of the food chain; and 3.3 Funding research on alternatives to contentious inputs.

·Four themes were mentioned as relevant aspects in relation to the Action Plan particularly often in the qualitative inputs (30 and more position papers and responses to open questions): Themes 1.1 Promoting the EU logo; 1.2 ‘Promoting organic canteens and increasing the use of green public procurements’; 2.1 ‘Encouraging conversion, investments and exchanges of best practices’; and 2.3 ‘Supporting the organisation of the food chain’.

As for the different actions in the Action Plan:

·For two actions, no information was provided through the quantitative inputs: Action 13 ‘raise awareness and provide better information about group certification’; and Action 15 ‘design measures for organic farming with special focus on gender and social aspects. Aspects of both actions were however mentioned by contributors in the position papers.

Contributors provided divergent opinions on the role of retailers in the organic value chain. In relation to increasing demand for, and consumption of, organic products, contributors saw a need to ensure the affordability of organic products for consumers while ensuring profitability for producers; and to ensure local accessibility of (quality) organic products. Other actions mentioned related to the structure of the organic distribution network and price competition and asked for measures that avoid independent retailers being disadvantaged. Certification was also seen as an indirect obstacle to the distribution of organic food.

General concerns relating to aspects covered in the draft Organic Action Plan were also raised by about a quarter of all contributors. They included aspects related to strategies, targets and the monitoring of both, the regulatory framework related to organic agriculture (e.g., inconsistencies, exclusion of certain products), controversial opinions on the contribution of organic farming to global issues of sustainability, questions about the general policy approach, and consumers and demand.