3.2.   Contribution to a common objective

3.6.   Proportionality of the aid amount (aid limited to the minimum)

3.6.1.1.   Eligible costs calculated on the basis of investment costs

3.7.   Avoidance of undue negative effects on competition and trade

5.3.2.1.   Method for the allocation of non-predefined ‘c’ coverage among Member States

5.5.   Notification and declaration of compatibility

(1)  Areas eligible for regional aid under Article 107(3)(a) of the Treaty, commonly referred to as ‘a’ areas, tend to be the more disadvantaged within the Union in terms of economic development. Areas eligible under Article 107(3)(c) of the Treaty, referred to as ‘c’ areas, also tend to be disadvantaged but to a lesser extent.

(2)  Regional top-ups for aid granted for such purposes are therefore not considered as regional aid.

(3)  Each MemberStatemay identify these areas in a regional aid map on the basis of the conditions laid down in Section 5.

(6)  Communication from the Commission to the European Parliament, the Council, the European Economic and Social Committee and the Committee of regions EU State Aid Modernisation (SAM), COM/2012/0209 final.

(12)  Transport means transport of passengers by aircraft, maritime transport, road, railway and by inland waterway or freight transport services for hire or reward.

(14)  The Commission will assess the compatibility of State aid to the energy sector on the basis of the future energy and environmental aid guidelines, amending the current guidelines on State aid for environmental protection, where the specific handicaps of the assisted areas will be taken into account.

(15)  Communication from the Commission, EU Guidelines for the application of State aid rules in relation to the rapid deployment of broadband networks (OJ C 25, 26.1.2013, p. 1).

(23)  The Commission intends to exempt from the notification obligation ad-hoc aid to infrastructure meeting the compatibility criteria of a general block exemption regulation despite the fact that it is not granted as part of a scheme.

(28)  For broadband network infrastructure the aid beneficiary must be selected on the basis of a competitive selection process in accordance paragraph 78(c) and (d) of the Broadband Guidelines, see footnote 15.

(30)  The obligation to maintain the investment in the area concerned for a minimum period of five years (three years for SMEs) should not prevent the replacement of plant or equipment that has become outdated or broken within this period, provided that the economic activity is retained in the area concerned for the minimum period. However, regional aid may not be awarded to replace that plant or equipment.

(31)  The 25 % own contribution requirement in paragraph 38 does not apply to investment aid granted for investments in outermost regions where the maximum aid intensities can exceed 75 % GGE and go up to 90 % for SMEs in accordance with paragraph 173 of these guidelines.

(32)  This is not the case for example for subsidised loans, public equity-capital loans or public participations which do not meet the market investor principle, state guarantees containing elements of aid, or public support granted within the scope of de minimis rule.

(33)  Ad hoc aid is subject to the same requirements as individual aid granted on the basis of a scheme, unless otherwise mentioned.

(34)  However, where future costs and revenue developments are surrounded by a high degree of uncertainty and there is a strong asymmetry of information, the public authority may also wish to adopt compensation models that are not entirely ex ante, but rather a mix of ex ante and ex post (for example,. using claw backs such as to allow sharing of unanticipated gains).

(35)  Such investments may create conditions allowing further investments that are viable without additional aid.

(38)  The counterfactual scenarios are described in paragraph 61.

(39)  The net present value of a project is the difference between the positive and negative cash flows over the lifetime of the investment, discounted to their current value (typically using the cost of capital).

(40)  The internal rate of return is not based on accounting earnings in a given year, but takes into account the stream of future cash flows that the investor expects to receive over the entire lifetime of the investment. It is defined as the discount rate for which the NPV of a stream of cash flows equals zero.

(42)  Scaled down aid intensities are the result of the mechanism defined in paragraph 20(c).

(43)  Regulation of the European Parliament and of the Council on specific provisions for the support from the European Regional Development Fund to the European territorial cooperation goal. Commission proposal COM(2011) 611 ERDF/ETC Regulation.

(45)  Including when operating aid schemes are notified to prolong existing aid measures.

(46)  For the purpose of this provision, the Commission will use the standard applicable aid ceiling in ‘c’ areas bordering ‘a’ areas regardless of the increased aid intensities in accordance with paragraph 176.

(47)  These entry barriers include legal barriers (in particular intellectual property rights), economies of scale and scope, access barriers to networks and infrastructure. Where the aid concerns a market where the aid beneficiary is an incumbent, possible barriers to entry may exacerbate the potential substantial market power wielded by the aid beneficiary and thus the possible negative effects of that market power.

(48)  Where there are strong buyers in the market, it is less likely that an aid beneficiary can increase prices. vis-à-vis these strong buyers.

(49)  This information should be regularly updated (for example every six months) and should be available in non-proprietary formats.

(50)  Such a common methodology may be provided by the Commission.

(52)  This ceiling is set using Eurostat population data for 2010. The ceiling will correspond to 47,00 % of the EU-28 population following the accession of Croatia to the Union.

(56)  In all subsequent references to GDP per capita, GDP is measured in PPS.

(65)  This element of the safety net applies to Cyprus and to Luxembourg.

(66)  This minimum population coverage applies to the Netherlands.

(68)  For unemployment, calculations should be based on regional data published by the national statistical office, using the average of the last three years for which such data are available (at the moment of the notification of the regional aid map). Except as otherwise indicated in these guidelines, the unemployment rate in relation to the national average is calculated on this basis.

(69)  To determine if such islands or contiguous areas have a GDP per capita below or equal to the EU-27 average, the Member State may refer to data provided by its national statistical office or other recognised sources.

(70)  To determine if such islands or contiguous areas have an unemployment rate above or equal to 115 % of the national average, the MemberStatemay refer to data provided by its national statistical office or other recognised sources.

(72)  For the purpose of applying Criterion 5, the Member State must demonstrate that the applicable conditions are fulfilled by comparing the areas concerned with the situation of other areas in the same MemberStateor in other Member States on the basis of socioeconomic indicators concerning structural business statistics, labour markets, household accounts, education, or other similar indicators. For this purpose, the MemberStatemay refer to data provided by its national statistical office or other recognised sources.

(73)  The Member State may refer to LAU 1 areas in place of LAU 2 areas if those LAU 1 areas have a smaller population than the LAU 2 area which they form part of.

(76)  The increased aid intensities for SMEs will not apply to aid awarded for large investment projects.

(78)  For the purpose of this provision, the Commission will use the most recent GDP per capita data published by Eurostat at NUTS 2 level on the basis of three-year average.

(79)  Defined on the basis of the NUTS nomenclature in force at the time of the review.

(80)  The adjusted population ceiling will be calculated on the basis of the population data used for establishing its initial map.

(3)  Only the part of DE40 Brandenburg corresponding to the former NUTS 2 region DE41 Brandenburg – Nordost and the part of DEE0 Sachsen-Anhalt corresponding to the former the NUTS 3 regions DEE1 Dessau and DEE3 Magdeburg (as set out in the NUTS 2003 nomenclature) are included as predefined ‘c’ areas. When notifying the regional aid map, and in order to facilitate the mid-term review foreseen at NUTS 2 level in subsection 5.6.2 of these guidelines, Germany can decide to designate as predefined ‘c’ areas the whole of the NUTS 2 regions of DE40 Brandenburg and DEE0 Sachsen-Anhalt, provided that the percentage of the national population available for non-predefined ‘c’ areas is reduced accordingly.

(4)  Saint-Martin and Mayotte are outermost regions but are not included in the 2010 NUTS nomenclature as their administrative status was modified under national law in 2007 and 2011 respectively. To determine the maximum aid intensity applicable in these two outermost regions, France may refer to data provided by its national statistical office or other recognised sources.

The Commission will determine the non-predefined ‘c’ coverage for each Member State concerned by applying the following method:

(1)  All GDP per capita referred to in this Annex are based on the average of the last three years for which Eurostat data are available, that is to say 2008-2010 for GDP per capita.

where: g i is the GDP per capita of MemberState i, expressed as a percentage of the EU-27 average.

(3)  All unemployment data referred to in this Annex are based on the average of the last three years for which Eurostat data are available, that is to say 2010-2012. However, these data do not contain information at NUTS 3 level and therefore unemployment data for the NUTS 2 region in which those NUTS 3 regions are situated are used.

where: u i is the national unemployment rate of MemberState i, expressed as a percentage of the EU-27 average.

(5)  Population figures for NUTS 3 regions are established on the basis of the population data used by Eurostat to calculate the regional GDP per capita for 2010.

Form for providing information on the regional aid maps

Definition of the steel sector

For the purpose of these guidelines, ‘steel sector’ means all activities related to the production of one or more of the following products:

Definition of the synthetic fibres sector

For the purpose of these guidelines, ‘synthetic fibres sector’ means: 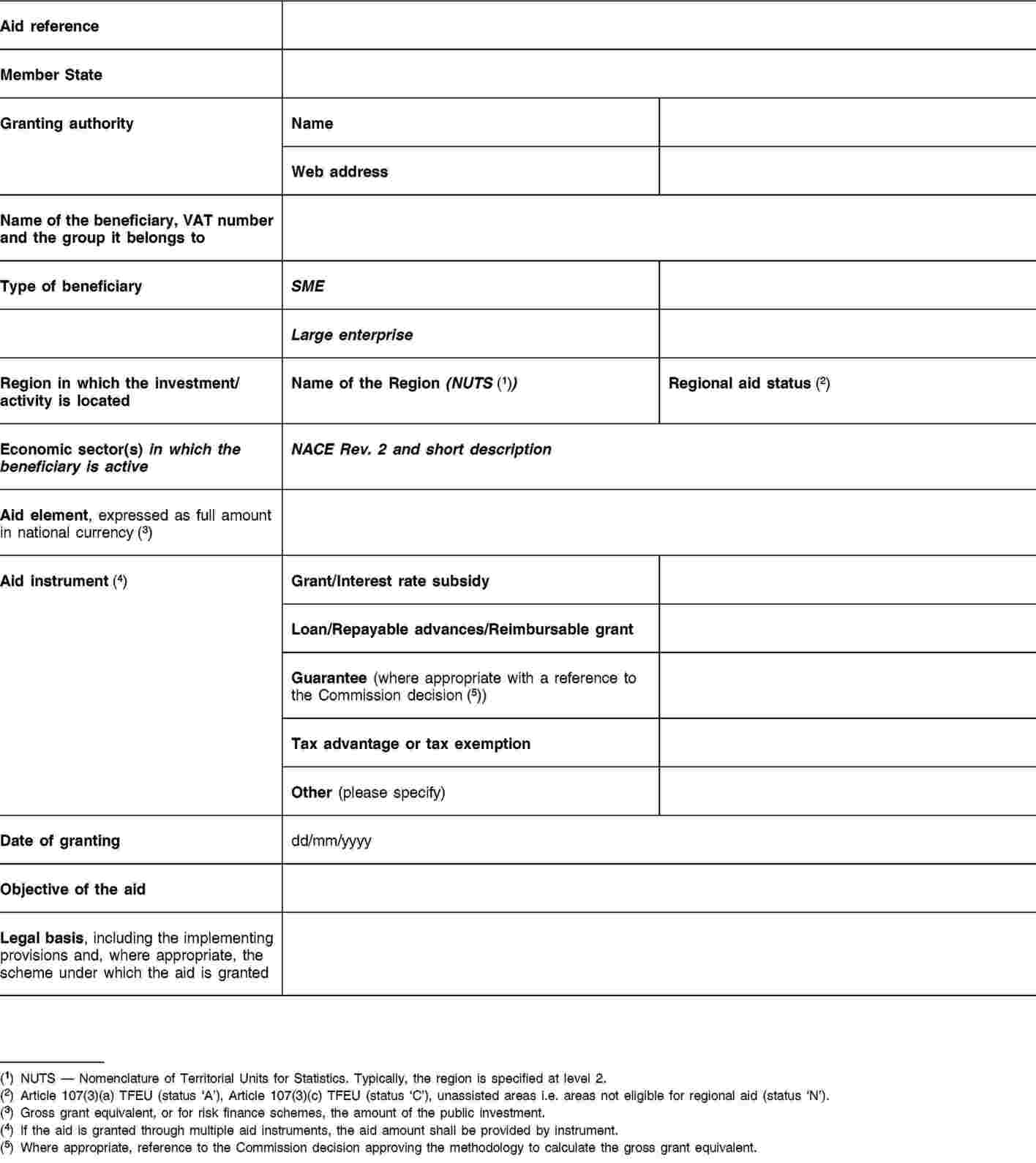