Only the original UNECE texts have legal effect under international public law. The status and date of entry into force of this Regulation should be checked in the latest version of the UNECE status document TRANS/WP.29/343, available at: http://www.unece.org/trans/main/wp29/wp29wgs/wp29gen/wp29fdocstts.html

Regulation No 100 of the Economic Commission for Europe of the United Nations (UNECE) — Uniform provisions concerning the approval of battery electric vehicles with regard to specific requirements for the construction, functional safety and hydrogen emission

Incorporating all valid text up to:

Supplement 1 to the original version of the Regulation — Date of entry into force: 21 February 2002

The following prescriptions apply to safety requirements with respect to all battery electric road vehicles of categories M and N, with a maximum design speed exceeding 25 km/h.

For the purpose of this proposal:

6.   MODIFICATIONS AND EXTENSION OF THE TYPE APPROVAL FOR VEHICLE TYPE

8.   PENALTIES FOR NON-CONFORMITY OF PRODUCTION

10.   NAMES AND ADDRESSES OF TECHNICAL SERVICES RESPONSIBLE FOR CONDUCTING APPROVAL TESTS AND OF ADMINISTRATIVE DEPARTMENTS

The Contracting Parties to the 1958 Agreement applying this Regulation shall communicate to the United Nations secretariat the names and addresses of the technical services responsible for conducting approval tests and the administrative departments which grant approval and to which forms certifying approval or extension or refusal or withdrawal of approval or production definitely discontinued, issued in other countries, are to be sent.

(1)  1 for Germany, 2 for France, 3 for Italy, 4 for the Netherlands, 5 for Sweden, 6 for Belgium, 7 for Hungary, 8 for the Czech Republic, 9 for Spain, 10 for Yugoslavia, 11 for the United Kingdom, 12 for Austria, 13 for Luxembourg, 14 for Switzerland, 15 (vacant), 16 for Norway, 17 for Finland, 18 for Denmark, 19 for Romania, 20 for Poland, 21 for Portugal, 22 for the Russian Federation, 23 for Greece, 24 for Ireland, 25 for Croatia, 26 for Slovenia, 27 for Slovakia, 28 for Belarus, 29 for Estonia, 30 (vacant), 31 for Bosnia and Herzegovina, 32 for Latvia, 33 (vacant), 34 for Bulgaria, 35 (vacant), 36 for Lithuania, 37 for Turkey, 38 (vacant), 39 for Azerbaijan, 40 for The former Yugoslav Republic of Macedonia, 41 (vacant), 42 for the European Community (Approvals are granted by its Member States using their respective ECE symbol), 43 for Japan, 44 (vacant), 45 for Australia, 46 for Ukraine, 47 for South Africa and 48 for New Zealand. Subsequent numbers shall be assigned to other countries in the chronological order in which they ratify or accede to the Agreement Concerning the Adoption of Uniform Technical Prescriptions for Wheeled Vehicles, Equipment and Parts which can be Fitted and/or be Used on Wheeled Vehicles and the Conditions for Reciprocal Recognition of Approvals Granted on the Basis of these Prescriptions, and the numbers thus assigned shall be communicated by the Secretary-General of the United Nations to the Contracting Parties to the Agreement. 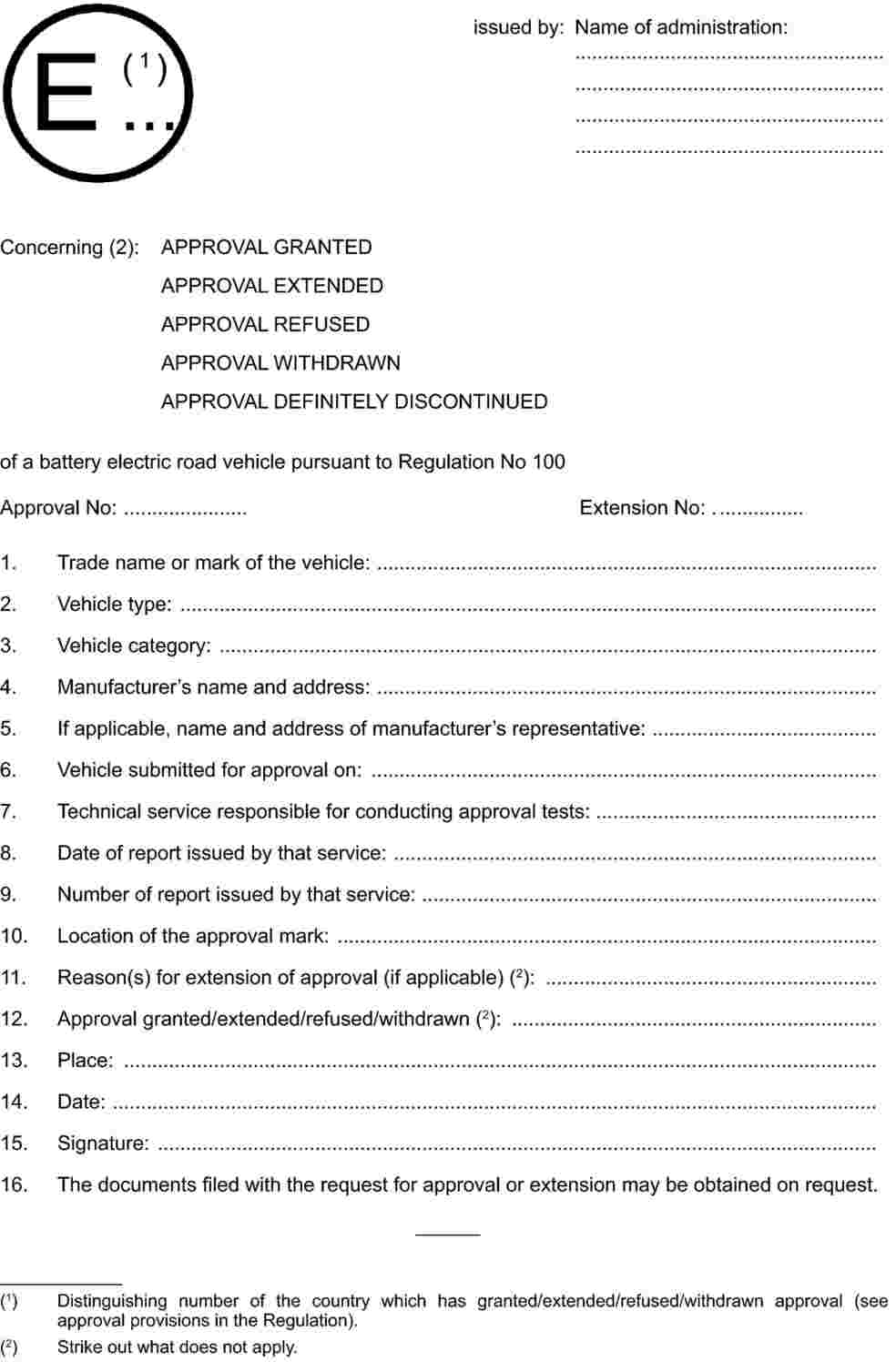 (see paragraph 4.4 of this Regulation)

(see paragraph 4.5 of this Regulation)

(1)  The latter number is given only as an example.

PROTECTION AGAINST DIRECT CONTACTS OF PARTS UNDER VOLTAGE

For the purpose of this standard, the following definitions apply:

2.   TESTS FOR PROTECTION AGAINST ACCESS TO HAZARDOUS PARTS INDICATED BY THE ADDITIONAL LETTER 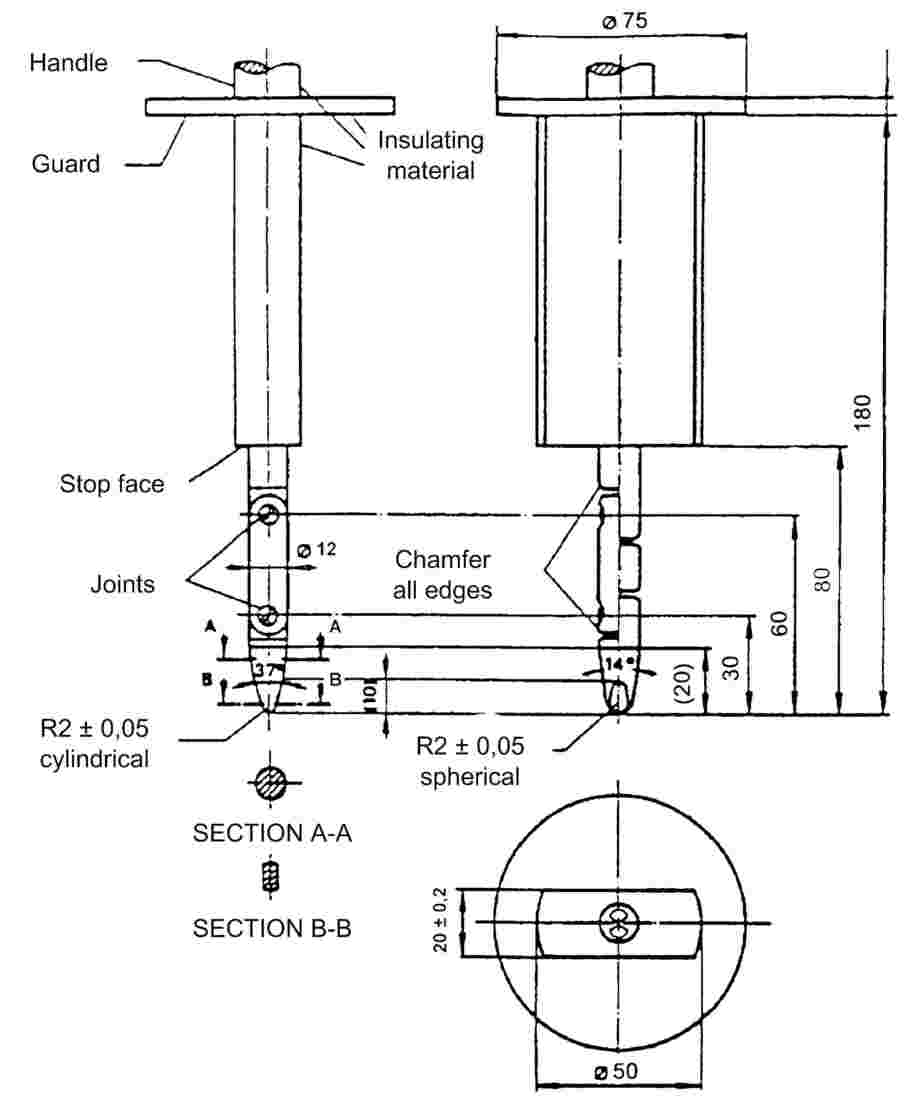 Material: metal, except where otherwise specified

Tolerances on dimensions without specific tolerance:

Both joints shall permit movement in the same plane and the same direction through an angle of 90° with a 0 to + 10° tolerance.

MEASUREMENT OF THE INSULATION RESISTANCE USING THE TRACTION BATTERY

1.   DESCRIPTION OF THE TEST METHOD

The traction battery shall be fully charged

The voltmeter used in this test shall measure DC values and have an internal resistance greater than 10 ΜΩ.

Measurement shall be made in two steps: 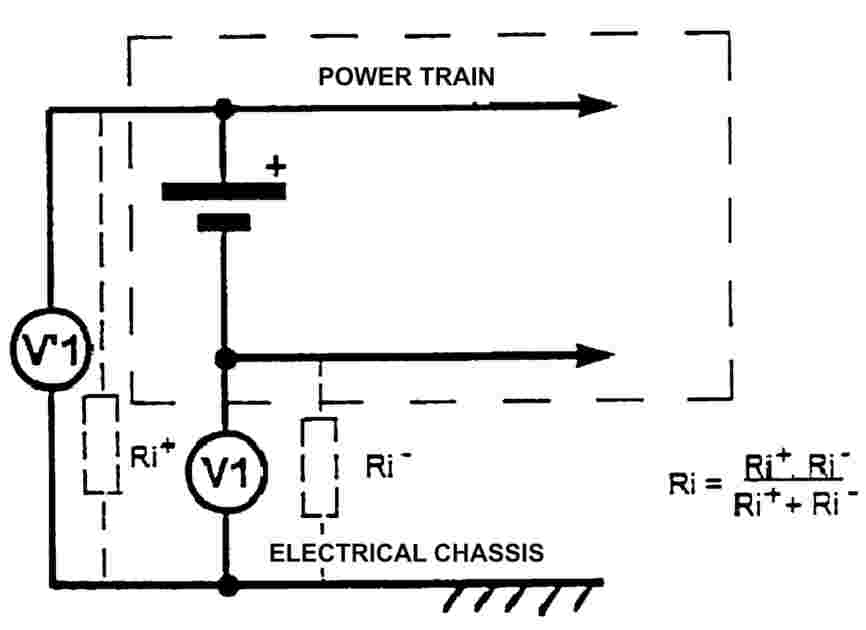 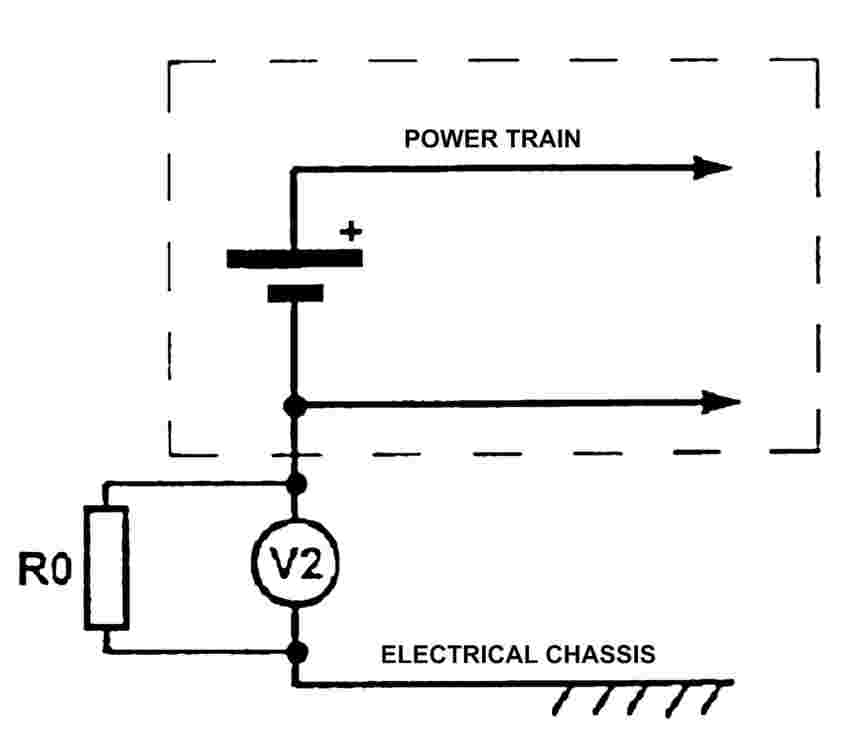 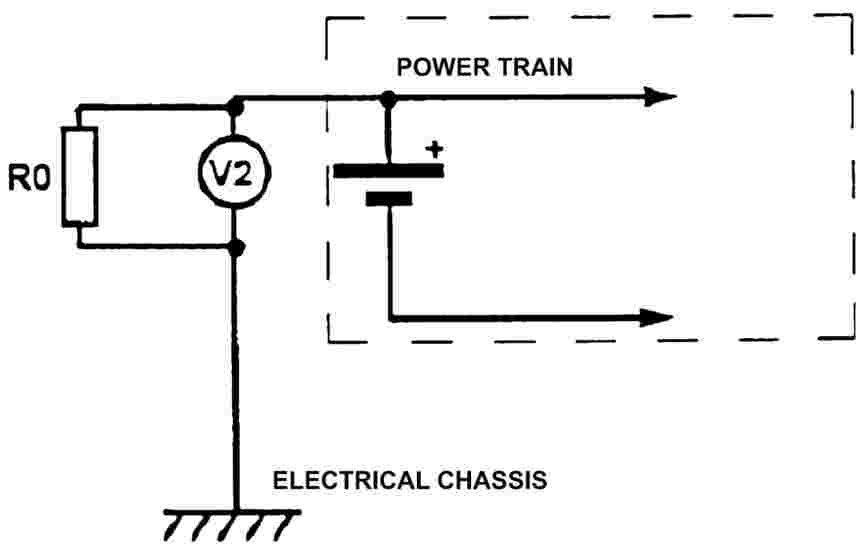 The value of the insulation resistance Ri is given by one of the formula:

SYMBOL FOR OF THE INDICATION OF A VOLTAGE

ESSENTIAL CHARACTERISTICS OF THE VEHICLE

This Annex describes the procedure for the determination of hydrogen emissions during the charge procedures of the traction battery of all battery electric road vehicles, according to paragraph 5.3 of this Regulation.

The hydrogen emission test (Figure 7.1) is conducted in order to determine hydrogen emissions during the charge procedures of the traction battery with the on-board charger. The test consists in the following steps: 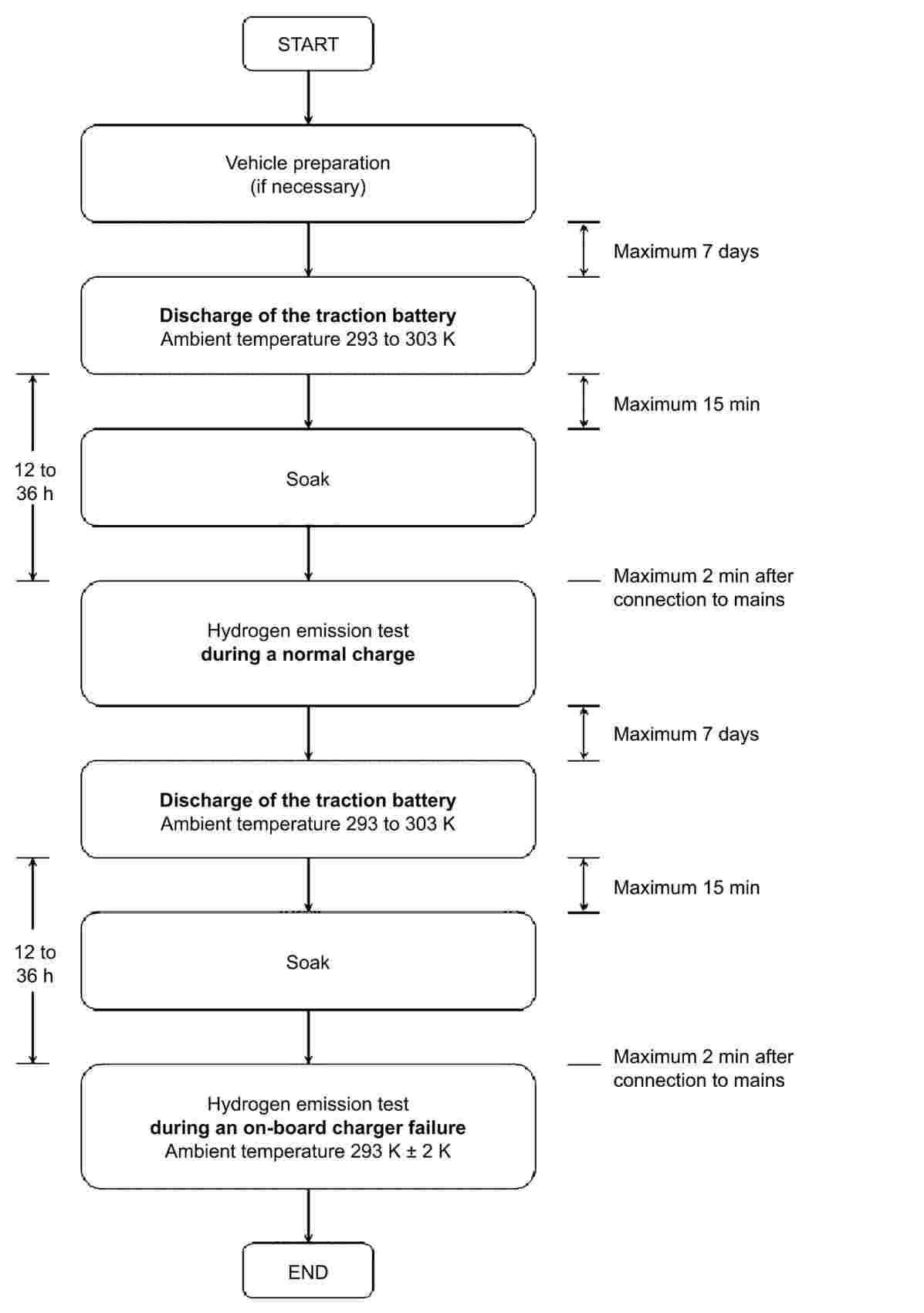 The chassis dynamometer must meet the requirements of the 05 series of amendments to Regulation No 83.

The hydrogen emission measurement enclosure must be a gas-tight measuring chamber able to contain the vehicle under test. The vehicle must be accessible from all sides and the enclosure when sealed must be gas-tight in accordance with Appendix 1 to this Annex. The inner surface of the enclosure must be impermeable and non-reactive to hydrogen. The temperature conditioning system must be capable of controlling the internal enclosure air temperature to follow the prescribed temperature throughout the test, with an average tolerance of ± 2 K over the duration of the test.

Any method of volume accommodation must limit the differential between the enclosure internal pressure and the barometric pressure to a maximum value of ± 5 hPa.

The chamber must be equipped with one or more fans or blowers with a possible flow of 0,1 to 0,5 m3/second in order to thoroughly mix the atmosphere in the enclosure. It must be possible to reach a homogeneous temperature and hydrogen concentration in the chamber during measurements. The vehicle in the enclosure must not be subjected to a direct stream of air from the fans or blowers.

The test consists in the five following steps:

If the vehicle has to be moved between two steps, it shall be pushed to the following test area.

The ageing of traction battery must be checked, proving that the vehicle has performed at least 300 km during seven days before the test. During this period, the vehicle must be equipped with the traction battery submitted to the hydrogen emission test. If this cannot be demonstrated then the following procedure will be applied.

The traction battery is discharged while driving on the test track or on a chassis dynamometer at a steady speed of 70 per cent ± 5 per cent from the maximum thirty minutes speed of the vehicle.

Within fifteen minutes of completing the battery discharge operation specified in paragraph 5.2, the vehicle is parked in the soak area. The vehicle is parked for a minimum of 12 hours and a maximum of 36 hours, between the end of the traction battery discharge and the start of the hydrogen emission test during a normal charge. For this period, the vehicle must be soaked at 293 K ± 2 K.

The formula below is used:

The hydrogen mass emissions for the vehicle are:

All equipment must be calibrated before its initial use and then calibrated as often as necessary and in any case in the month before type approval testing. The calibration methods to be used are described in this appendix.

2.   CALIBRATION OF THE ENCLOSURE

3.   CALIBRATION OF THE HYDROGEN ANALYSER

The analyser should be calibrated using hydrogen in air and purified synthetic air. See paragraph 4.8.2 of Annex 7.

Each of the normally used operating ranges is calibrated by the following procedure.

ESSENTIAL CHARACTERISTICS OF THE VEHICLE FAMILY