on certain aspects of the procedure of licensing railway undertakings

Having regard to Directive 2012/34/EU of the European Parliament and of the Council of 21 November 2012 establishing a single European railway area (1) and in particular Article 17(5) thereof,

This Regulation sets out the details for the use of a common template for the licence document. It also provides for certain aspects of the procedure for granting a licence.

The use of the common template for the licence document

1.   Licences issued in accordance with Chapter III of Directive 2012/34/EU shall use the standard format set out in Annex I and II of this Regulation.

In the case where a new licence is issued, the licensing authority shall attribute the EC licence notification number in accordance with the harmonised numbering system called European Identification Number (EIN), as laid down in the Appendix 2 of the Commission Decision 2007/756/EC (5).

2.   Licensing authorities shall inform the European Railway Agency in accordance with Article 24(8) of Directive 2012/34/EU providing a copy of the licence document as stipulated in the communication protocol agreed between them.

5.   Once the licensing authority is satisfied with the cover, it shall inform the European Railway Agency, updating an existing annex communicated by a licensing authority of the same Member State or adding a further annex to the licence, using the standard format of this Annex II and assign the next number (2, 3, 4, etc.) to this annex.

6.   Each liability annex shall mention the amount, the scope, such as geographical scope or types of services, and the commencement date and, if applicable, of expiration of the cover. The licence notification number shall be mentioned in each annex to establish a clear link with the licensed railway undertaking. The licensing authority shall establish an updated annex when it is informed about a change in the cover for civil liability and communicate the annex to the European Railway Agency.

Member States may request a licensing fee for the examination of each application. Licensing fees shall be applied in a non-discriminatory way.

1.   The licensing authority shall publish the minimum required levels of cover, including where the amount of such cover is laid down in national law.

2.   The licensing authority may not request cover to take effect before the railway undertaking starts its train operations.

3.   By 25 August 2015 at the latest, the licensing authority that has issued the licence shall request from all licensed railway undertakings evidence on the level and scope of their existing cover for liabilities in the event of accidents, unless they have contracted an insurance or the authority already has this information. It may also request such evidence from the railway undertakings in case it has doubts whether their cover meets the requirements referred to in Article 22 of Directive 2012/34/EU.

4.   In case the undertaking does not demonstrate that it is adequately insured, but that it has adequate guarantees for cover, the licensing authority, if appropriate after consultation of the regulatory body, shall examine whether the conditions under which the undertaking has obtained such guarantees correspond to market conditions which would have been obtained by any other undertaking with the same level of financial standing and risk exposure.

5.   If the licensing authority suspends the licence in accordance with Article 24(1) of Directive 2012/34/EU, or grants a temporary licence in accordance with Article 24(3) of the said Directive, it shall inform any other competent authorities referred to in Regulation (EC) No 1370/2007 of the European Parliament and of the Council (6), with which it knows that the railway undertaking had contracted services. If the licensing authority has doubts regarding the compatibility of the guarantees for cover of its liabilities with the Union rules on State aid, it may transmit the necessary information to the authorities responsible for the control of such State aid rules.

1.   The granting of a licence may not be conditional on the undertaking holding a safety certificate referred to in Article 10 of Directive 2004/49/EC.

Certain aspects of the procedure for granting a licence

2.   The licensing authority may only request documents referred to in Chapter III of Directive 2012/34/EU or required by national legislation. The licensing authority shall publish a list of all the documents and their contents and shall not request any further documents from undertakings. If the list is updated and published, undertakings may still rely on the former list as regards applications they submitted before the update.

3.   In respect of undertakings with annual revenues of less than EUR 5 million from rail transport activities, the licensing authority may consider the requirement regarding its ability to meet actual and potential obligations for a period of 12 months from the start of operations in accordance with Article 20(1) of Directive 2012/34/EU as fulfilled, if the undertaking can demonstrate that its net capital is at least EUR 100 000 or an amount agreed with the regulatory body. The licensing authority shall publish this amount.

This Regulation shall enter into force on the twentieth day following that of its publication the Official Journal of the European Union.

Standard format for the licence document 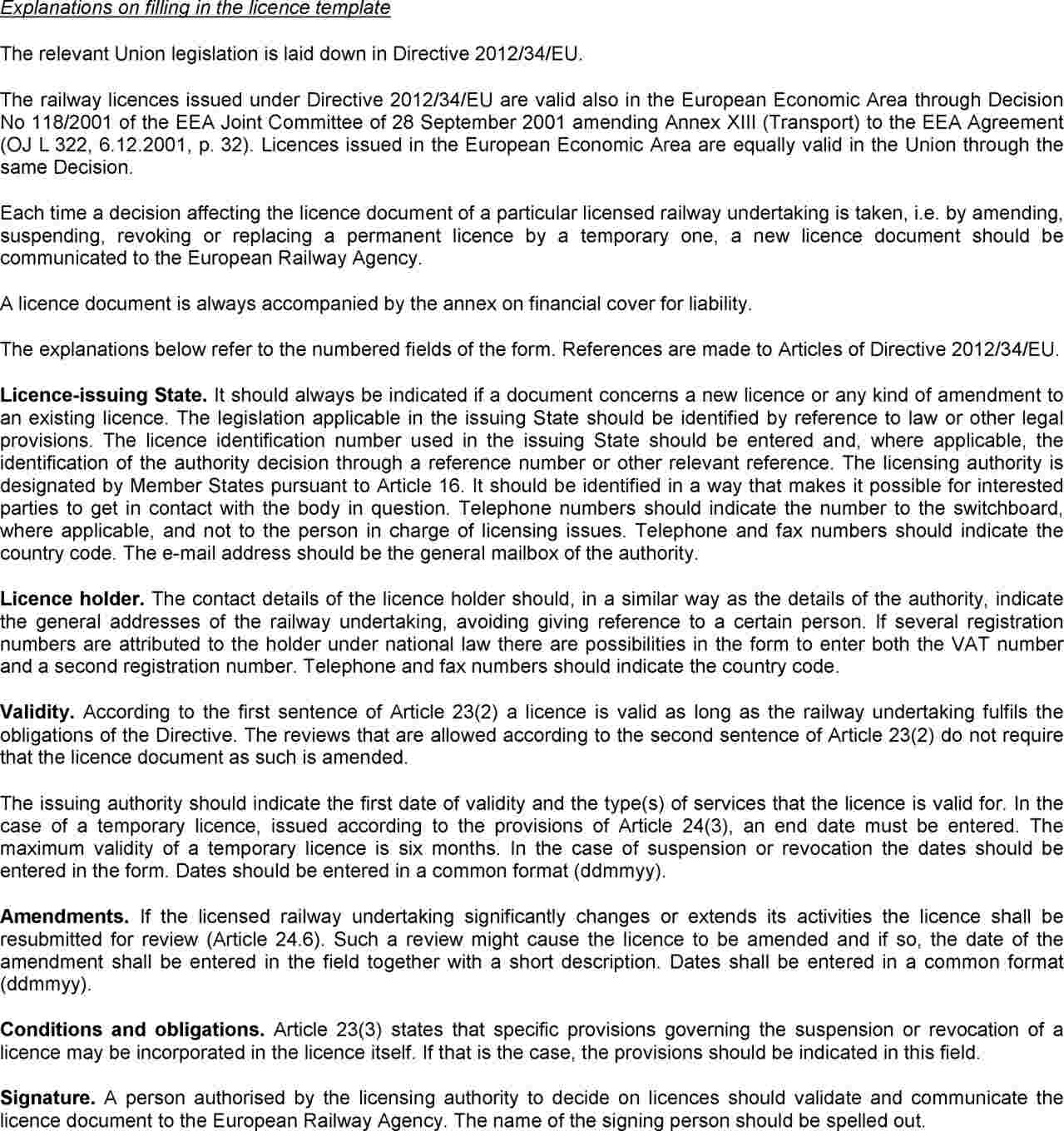