Having regard to the Treaty on the Functioning of the European Union, and in particular Article 87(2) thereof,

This Directive aims to ensure a high level of protection for all road users in the Union by facilitating the cross-border exchange of information on road safety related traffic offences and thereby the enforcement of sanctions, where those offences are committed with a vehicle registered in a Member State other than the Member State where the offence took place.

This Directive shall apply to the following road safety related traffic offences:

For the purposes of this Directive, the following definitions shall apply:

Procedure for the exchange of information between Member States

1.   For the investigation of the road safety related traffic offences referred to in Article 2, the Member States shall allow other Member States' national contact points, as referred to in paragraph 3 of this Article, access to the following national VRD, with the power to conduct automated searches on:

The data elements referred to in points (a) and (b) which are necessary to conduct the search shall be in compliance with Annex I.

2.   Any searches in the form of outgoing requests shall be conducted by the national contact point of the Member State of the offence using a full registration number.

The Member State of the offence shall, under this Directive, use the data obtained in order to establish who is personally liable for road safety related traffic offences referred to in Articles 2 and 3.

4.   Member States shall take all necessary measures to ensure that the exchange of information is carried out by interoperable electronic means without exchange of data involving other databases. Member States shall ensure that this exchange of information is conducted in a cost efficient and secure manner and ensure the security and protection of the data transmitted, as far as possible using existing software applications such as the one especially designed for the purposes of Article 12 of Decision 2008/615/JHA, and amended versions of those software applications, in compliance with Annex I to this Directive and with points 2 and 3 of Chapter 3 of the Annex to Decision 2008/616/JHA. The amended versions of the software applications shall provide for both online real-time exchange mode and batch exchange mode, the latter allowing for the exchange of multiple requests or responses within one message.

5.   Each Member State shall bear its costs arising from the administration, use and maintenance of the software applications referred to in paragraph 4.

1.   The Member State of the offence shall decide whether to initiate follow-up proceedings in relation to the road safety related traffic offences referred to in Article 2 or not.

In the event that the Member State of the offence decides to initiate such proceedings, that Member State shall, in conformity with its national law, inform the owner, the holder of the vehicle or the otherwise identified person suspected of committing the road safety related traffic offence accordingly.

This information shall, as applicable under national law, include the legal consequences thereof within the territory of the Member State of the offence under the law of that Member State.

2.   When sending the information letter to the owner, the holder of the vehicle or the otherwise identified person suspected of committing the road safety related traffic offence, the Member State of the offence shall, in accordance with its law, include any relevant information, notably the nature of the road safety related traffic offence referred to in Article 2, the place, date and time of the offence, the title of the texts of the national law infringed and the sanction and, where appropriate, data concerning the device used for detecting the offence. For that purpose, the Member State of the offence may use the template as set out in Annex II.

Reporting by Member States to the Commission

The comprehensive report shall also include a description of the situation at national level in relation to the follow-up given to the road safety related traffic offences, based on the proportion of such offences which have been followed up by information letters.

1.   The provisions on data protection set out in Framework Decision 2008/977/JHA shall apply to personal data processed under this Directive.

2.   In particular, each Member State shall ensure that personal data processed under this Directive are, within an appropriate time period, rectified if inaccurate, or erased or blocked when they are no longer required, in accordance with Articles 4 and 5 of Framework Decision 2008/977/JHA, and that a time limit for the storage of data is established in accordance with Article 9 of that Framework Decision.

Member States shall ensure that all personal data processed under this Directive are only used for the objective set out in Article 1, and that the data subjects have the same rights to information to access, to rectification, erasure and blocking, to compensation and to judicial redress as those adopted under national law in implementation of relevant provisions of Framework Decision 2008/977/JHA.

All relevant provisions on data protection set out in the Prüm Decisions shall also apply to personal data processed under this Directive.

Information for road users in the Union

1.   The Commission shall make available on its website a summary in all official languages of the institutions of the Union of the rules in force in Member States in the field covered by this Directive. Member States shall provide information on these rules to the Commission.

2.   Member States shall provide road users with the necessary information about the rules applicable in their territory and the measures implementing this Directive in association with, among other organisations, road safety bodies, non-governmental organisations active in the field of road safety and automobile clubs.

Exercise of the delegation

1.   The power to adopt delegated acts is conferred on the Commission subject to the conditions laid down in this Article.

3.   The delegation of power referred to in Article 9 may be revoked at any time by the European Parliament or by the Council. A decision to revoke shall put an end to the delegation of the power specified in that decision. It shall take effect on the day following the publication of the decision in the Official Journal of the European Union or at a later date specified therein. It shall not affect the validity of any delegated acts already in force.

4.   As soon as it adopts a delegated act, the Commission shall notify it simultaneously to the European Parliament and to the Council.

Revision of the Directive

By 7 November 2016, the Commission shall submit a report to the European Parliament and the Council on the application of this Directive by the Member States. In its report, the Commission shall focus in particular on the following aspects and shall, as appropriate, make proposals to cover those aspects:

1.   Member States shall bring into force the laws, regulations and administrative provisions necessary to comply with this Directive by 7 November 2013. They shall forthwith communicate to the Commission the text of those provisions.

When Member States adopt those provisions, they shall contain a reference to this Directive or be accompanied by such a reference on the occasion of their official publication. Member States shall determine how such reference is to be made.

2.   Member States shall communicate to the Commission the text of the main provisions of national law which they adopt in the field covered by this Directive.

This Directive shall enter into force on the day following its publication in the Official Journal of the European Union.

This Directive is addressed to the Member States in accordance with the Treaties.

DATA ELEMENTS RELATED TO THE SEARCH REFERRED TO IN ARTICLE 4

Part I.   Data relating to vehicles

Part II.   Data relating to holders or owners of the vehicle

TEMPLATE FOR THE INFORMATION LETTER

referred to in Article 5 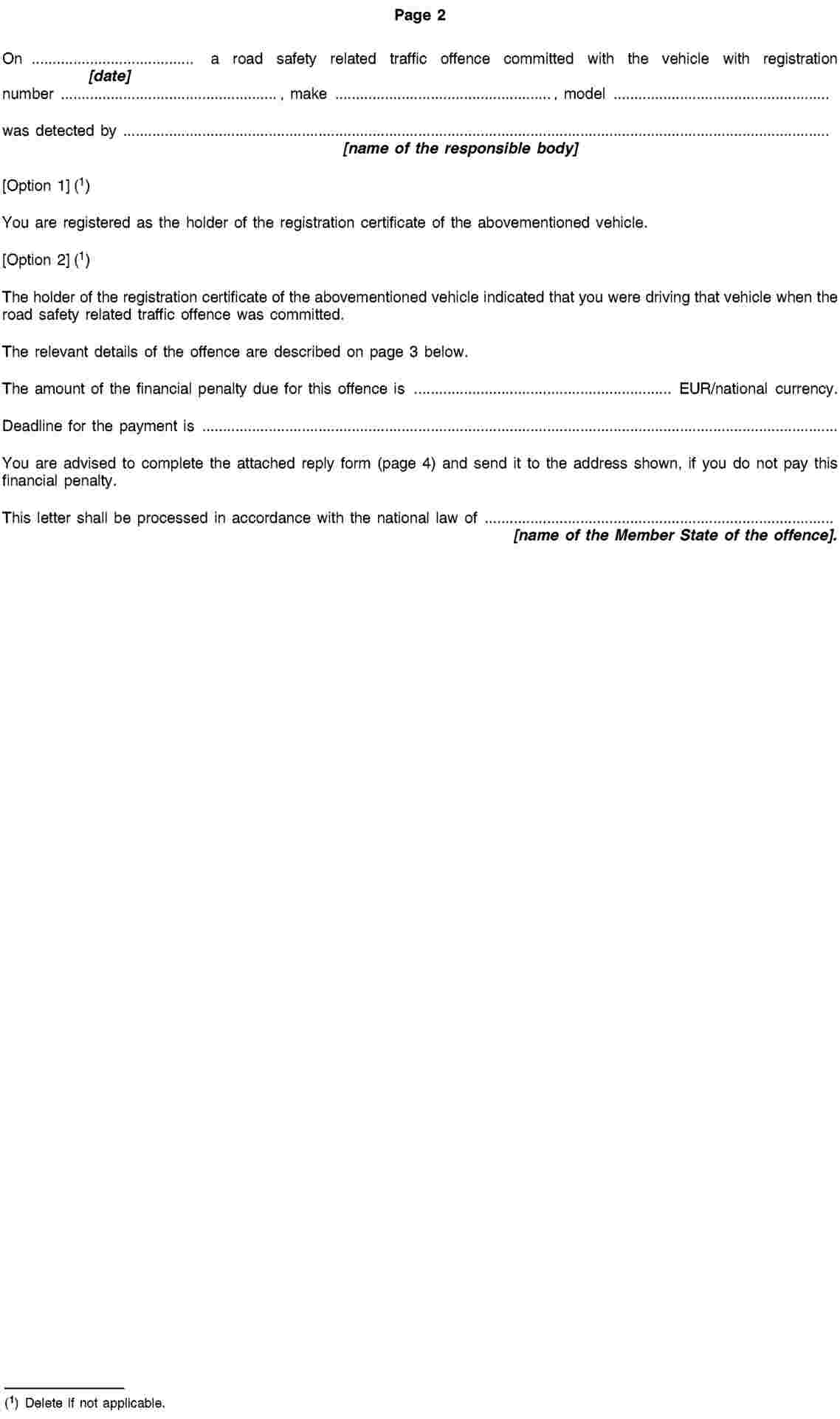 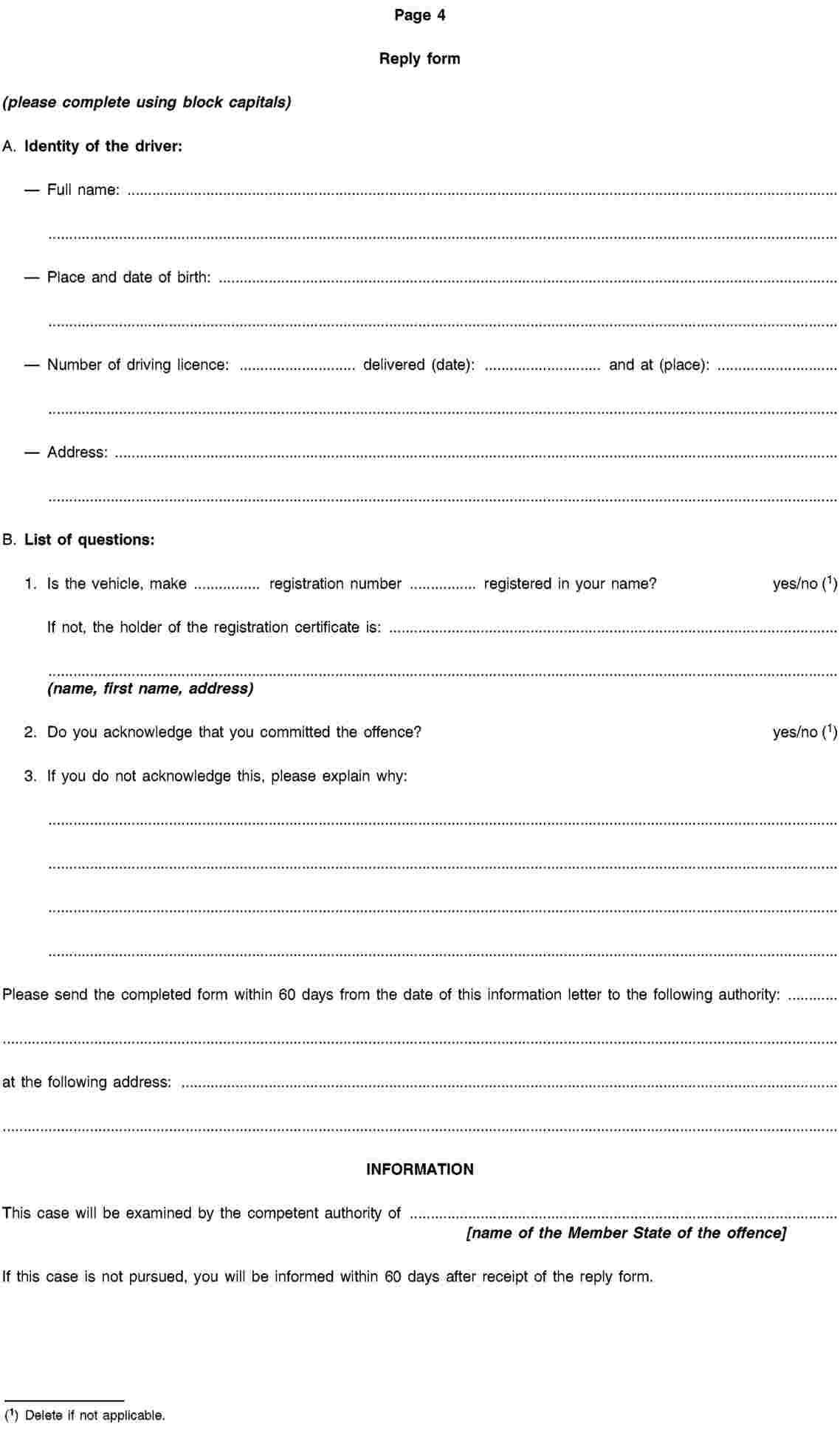 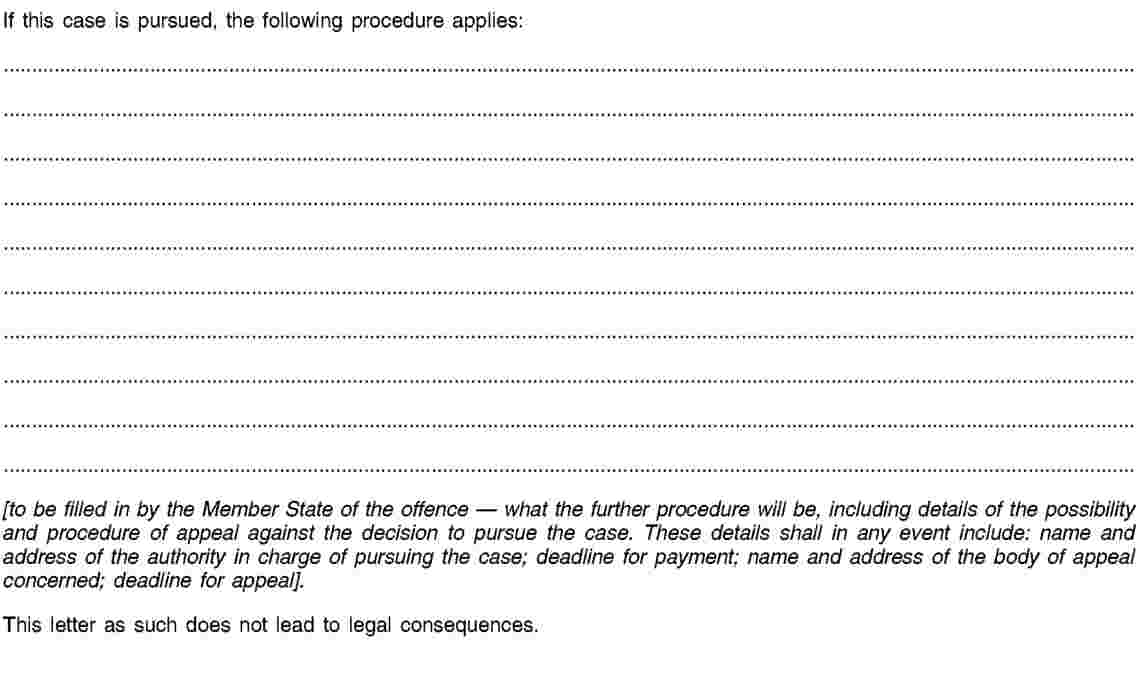 COMMISSION STATEMENT ON THE LEGAL BASIS

"The Commission notes that both Council and European Parliament agree on the replacement of the legal basis proposed by the Commission, namely Article 91, paragraph 1c, TFEU by Article 87, paragraph 2, TFEU. While the Commission shares the view of both co-legislators about the importance of pursuing the aims of the proposed Directive to improve road safety, it considers however from a legal and institutional perspective that Article 87, paragraph 2, TFEU does not constitute the appropriate legal basis and therefore reserves its right to use all legal means at its disposal."