Consolidated text: Commission Regulation (EC) No 1295/2008 of 18 December 2008 on the importation of hops from third countries (Codified version)

Having regard to Council Regulation (EC) No 1234/2007 of 22 October 2007 establishing a common organisation of agricultural markets and on specific provisions for certain agricultural products (Single CMO Regulation) ( 1 ), and in particular Article 192(2) and Article 195(2), in conjunction with Article 4, thereof,

1.  Entry into free circulation in the Community of the products from third countries referred to in point (f) of Article 1 of Regulation (EC) No 1234/2007 shall be conditional upon proof being furnished that the requirements specified in Article 158(1) of that Regulation have been met.

1.  The attestation of equivalence shall be made out for each consignment and shall consist of an original and two copies to be drawn up on a form corresponding to the model set out in Annex II and in accordance with the rules set out in Annex IV.

2.  An attestation of equivalence shall be valid only if it is duly completed and authenticated by one of the agencies referred to in Annex I.

3.  A duly authenticated attestation of equivalence is one which shows the place and date of issue and which has been signed and bears the stamp of the issuing agency.

1.  Each unit of packaging covered by an attestation of equivalence shall bear the following particulars in one of the official languages of the Community:

(a) the description of the product;

(b) the variety or varieties;

(c) the country of origin;

(d) the marks and numbers indicated in section 9 of the attestation of equivalence or the extract.

2.  The particulars provided for in paragraph 1 shall appear in legible, indelible characters of uniform size on the outside of the package.

1.  Where, before its entry into free circulation, a consignment covered by an attestation of equivalence is split up and redispatched an attestation extract shall be drawn up in respect of each new consignment resulting from such splitting.

(i) the description of the product;

(iii) the place of production;

(iv) the year of harvest;

(vi) the country of origin;

(vii) the markings and identification numbers given in Section 9 of the attestation;

(b) for products manufactured from hops, in addition to the particulars listed under point (a): the place and date of processing.

1.  The Member States shall regularly carry out checks on a random basis to verify whether hops which are imported pursuant to Article 158 of Regulation (EC) No 1234/2007 comply with the minimum marketing requirements set out in Annex I to Regulation (EC) No 1850/2006.

2.  The Member States shall report to the Commission, every year by 30 June, the frequency, type and result of the checks which were carried out over the year preceding that date. The checks shall cover at least 5 % of the number of hop consignments expected to be imported from a third country into the Member State in question during the year.

3.  If the competent authorities of the Member States find that the samples examined do not satisfy the minimum marketing requirements referred to in paragraph 1, the corresponding consignments may not be marketed in the Community.

4.  If a Member State discovers that the characteristics of a product do not conform to the details listed on the attestation of equivalence accompanying the product it shall notify the Commission thereof.

(a) small packages for sale to private individuals for their own use;

(b) for scientific and technical experiments;

(c) for fairs covered by the special customs arrangements for fairs.


AGENCIES AUTHORISED TO ISSUE ATTESTATIONS IN RESPECT OF 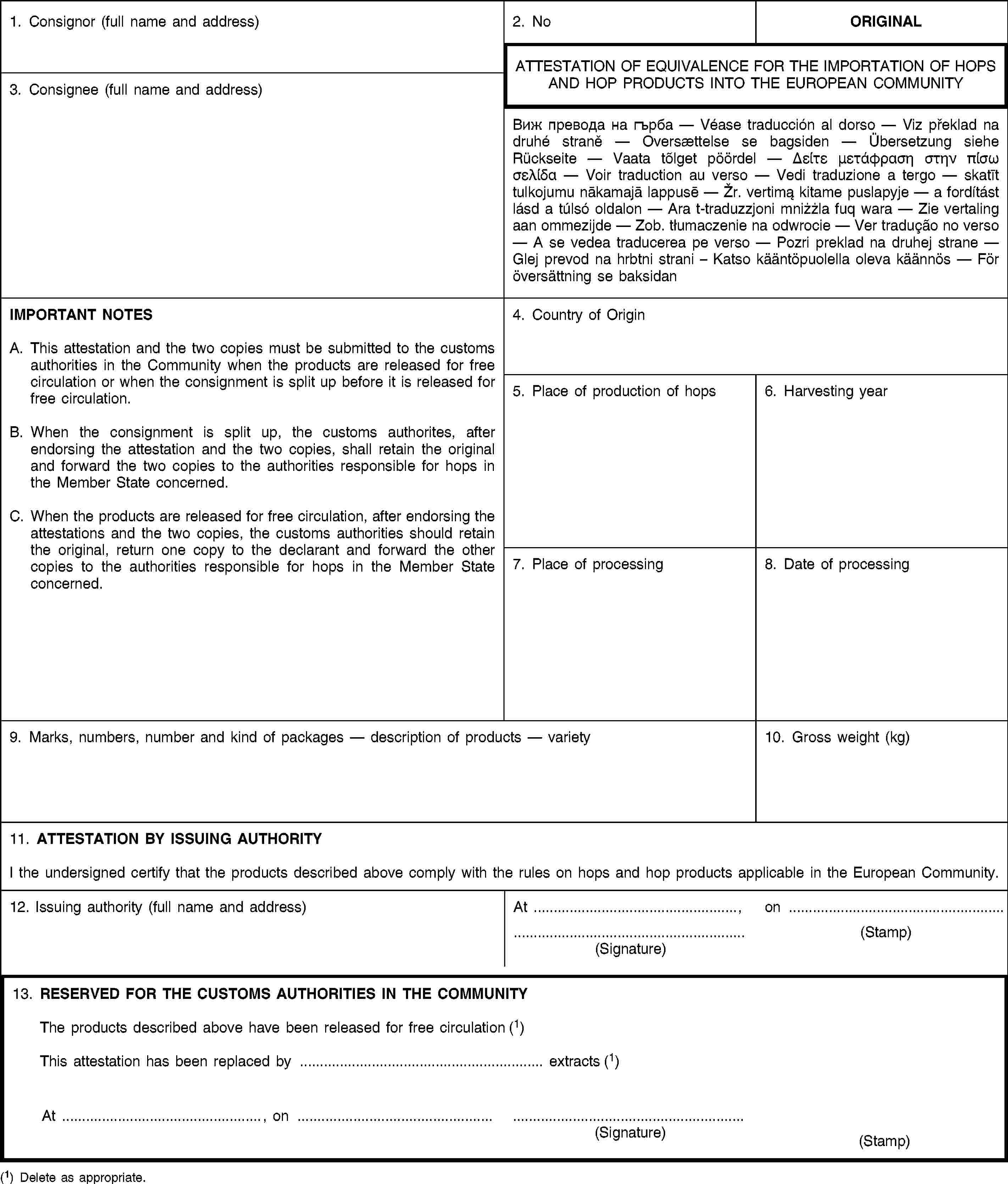 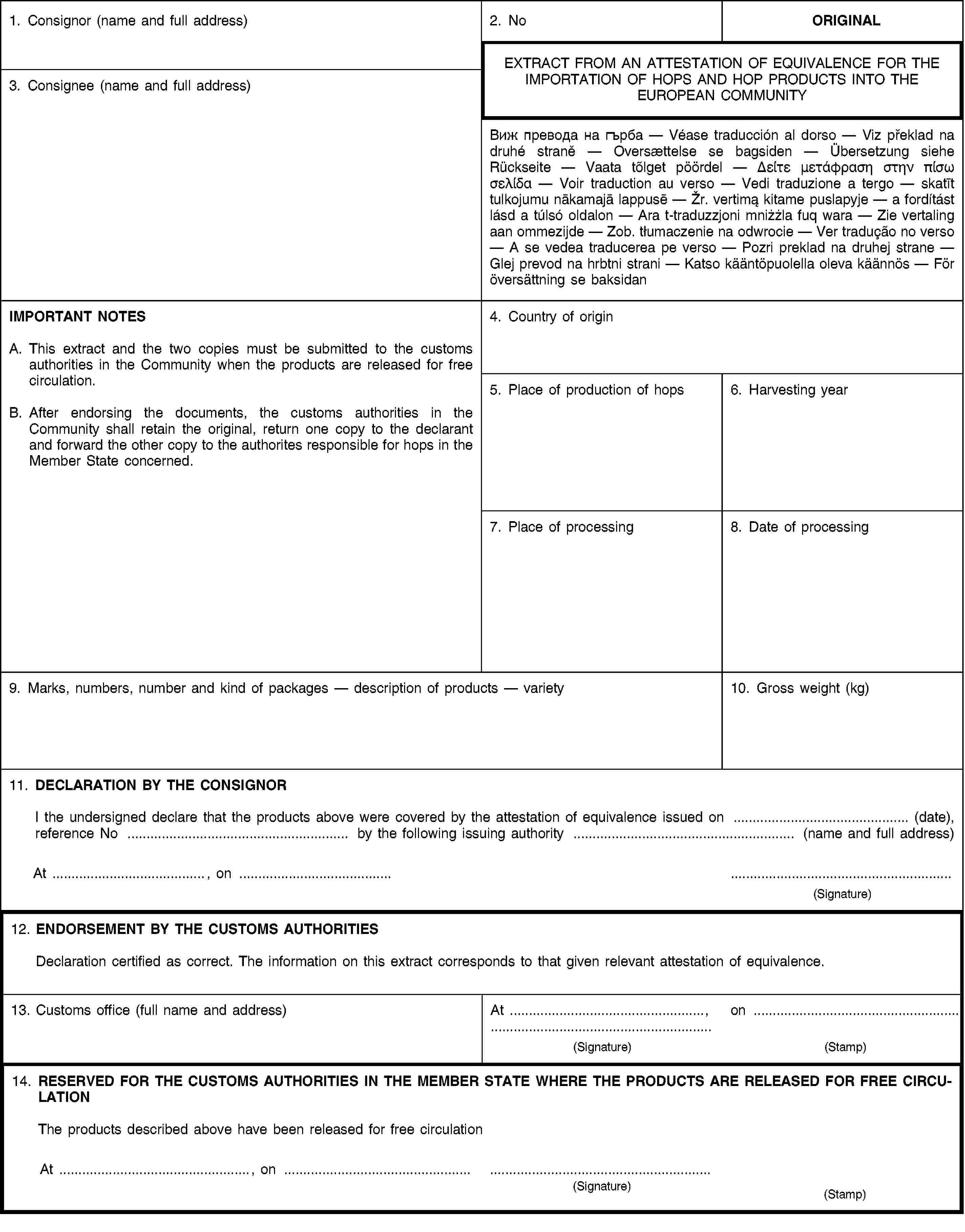 B. The extract of the attestation of equivalence must be printed in one of the official languages of the Community designated by the competent authorities of the issuing Member State

B. Each form is individualised by a number given by the issuing authority, this number being the same for the original and its two copies.

C. In the case of the attestation of equivalence and its extracts:

1. Section 5 shall not be completed for hop products made from blends of hops;

2. Sections 7 and 8 shall be completed for all products made from hops;

3. the description of the products (Section 9) shall be one of the following:

(a) ‘unprepared hops’: i.e. hops which have only undergone preliminary drying and packaging,

(b) ‘prepared hops’: i.e. hops which have undergone final drying and packaging,

(c) ‘hop powder’ (which shall include hop pellets and enriched hop powder),

(d) ‘isomerised hop extract’: i.e. an extract in which the alpha acids have been almost totally isomerised,