2.2.1.    Map showing the rate of compliance with Article 3 (collection and IAS)

2.2.2.    Map showing the rate of compliance with Article 4 (secondary treatment)

2.2.3.    Map showing the rate of compliance with Article 5 (more stringent treatment than secondary)

2.4.    Rates of application of individual or other appropriate systems (IAS) in individual Member States

2.4.1.    Classification by percentage of generated load connected to IAS

2.4.2.    Classification of Member States by number of agglomerations which apply more than 10% of IAS

Number of agglomerations with over 2,000 population equivalents (p.e.) per Member State and size category. The categories reflect the three main ranges of size defined in the Directive, each of which is subject to different legal obligations on treatment, depending on the nature of the area where waste water is discharged. The variation in distribution between countries reflects differences in their level of urbanisation and in the structure of urban areas.

2.Compliance rate and distance to target in 2016 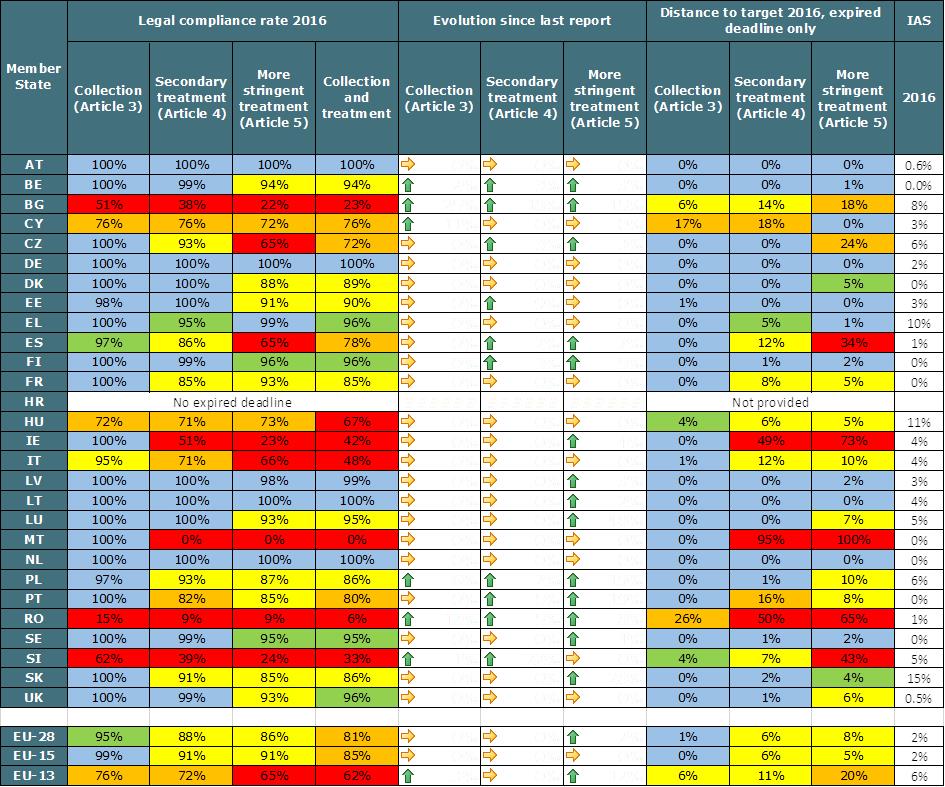 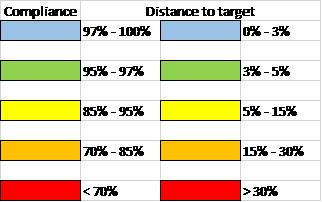 Five countries are fully or almost fully compliant with all the Directive’s requirements (AT, DE, LV, LT and NL). Other five countries reach a very high compliance level (EL, FI, SE and UK). Seven countries are placed in a relatively high level (BE, DK, EE, FR, LU, PL and SK). Four countries are in a lower level of compliance (CY, CZ, ES and PT). At the other end of the scale, seven (BG, HU, IE, IT, MT, RO and SI) comply to a limited or very limited extent.

Nine countries (AT, BE, DE, EE, FI, LV, LT, NL, SE) have already met very high targets in collection and treatment. However, a further eight (RO, MT, IE, SI, ES, CY, CZ, BG) still have a significant way to go, with distance to target values of over 15% or even 30% in collection and/or treatment. Malta has a very high value of distance to target for secondary treatment (95%). Excessive salt water in all treatment plants and farm manure discharges into collecting systems may explain the country’s poor bad performance. Other ten countries (DK, EL, FR, HU, IT, LU, PL, PT, SK and UK) have met high targets, but still have to make some effort at collection and/or treatment level.

Legal compliance rates for collection and/or treatment reflect the waste water load of agglomerations > 2,000 p.e. found to be fully compliant with the requirements of collection (Article 3), secondary treatment (Article 4), or, where applicable, treatment more stringent than secondary (Article 5), compared to the total amount of waste water load that should meet such requirements, as per Article, expressed as a percentage.

Legal compliance rates can be calculated at agglomeration, regional, national, EU level, etc., depending on the type of data taken into consideration and compared.

Legal compliance with Articles 3, 4 or 5 does not reflect the fractions of load in agglomerations that are not fully compliant, but which are in line with the Directive’s requirements. For instance, an agglomeration that collects and adequately treats 80% of the waste water it generates is not considered compliant with Articles 3 and 4/5 of the Directive. This means it will not be included in the calculation of legal compliance rates at regional level, etc, even if the above-mentioned fraction of load is in line with the Directive’s requirements at collection and treatment level.

It should therefore be noted that ‘legal compliance’ does not reflect the efforts yet to be made by each region (in the case of the maps in this chapter) to implement the Directive’s requirements in full. The concept is thus far less stringent than ‘distance to target’.

2.2.1.Map showing the rate of compliance with Article 3 (collection and IAS) 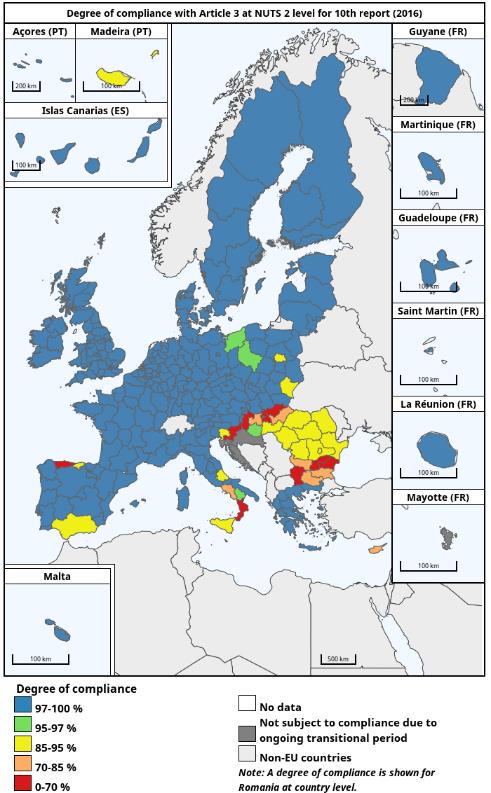 2.2.2.Map showing the rate of compliance with Article 4 (secondary treatment) 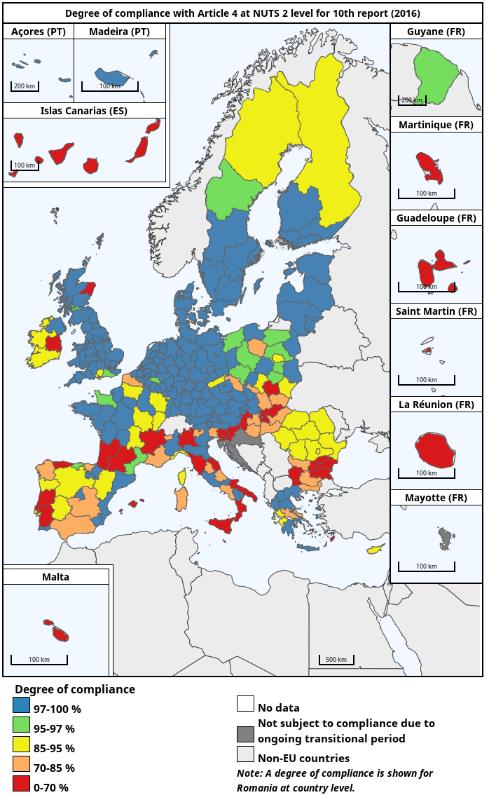 Map showing the situation by NUTS 2 regions. All regions in BG, CY, HU, MT, RO and SI, and some regions in CZ, EL, ES, FR, IE, IT, PL, PT, SK and the UK, have compliance rates for secondary treatment of below 85%. More than 20 EU regions even fall below 70%.

2.2.3.Map showing the rate of compliance with Article 5 (more stringent treatment than secondary) 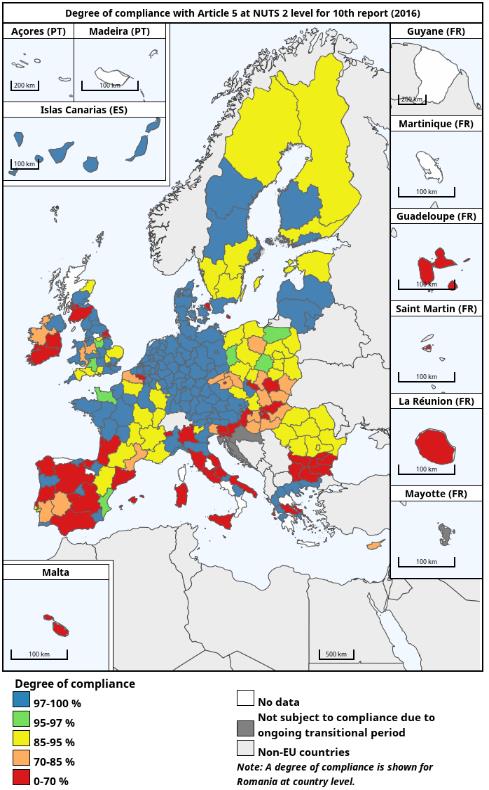 The term ‘distance to target’, used for the first time in the Commission’s reports in the 2014 reporting year, means the effort still required to comply in full with the Directive’s requirements on collection and treatment.

‘Distance to target’ values do not take account of agglomerations subject to under non-expired deadlines which therefore have no compliance obligations in this report (i.e. agglomerations in Croatia, those that are subject to a final deadline in Romania, or those that discharge waste water into sensitive areas of late designation under Article 5, where applicable).

2.3.1.Distance to target for collection (Article 3) 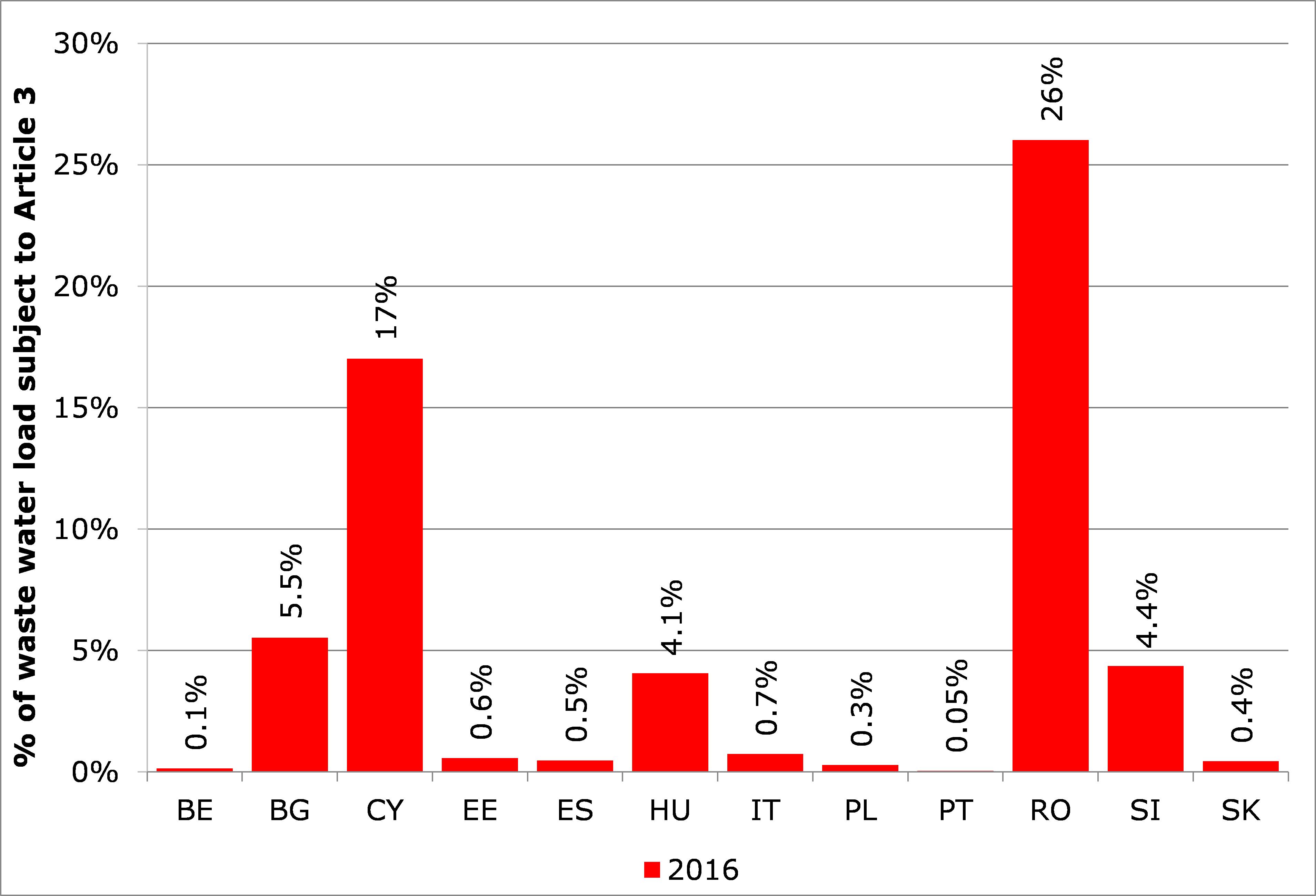 The distance to target for collection in Europe in terms of load is attributable mainly to six Member States which account for the highest absolute values: BG, CY, ES, HU, IT (between 174,000 p.e. and 565,000 p.e. each) and RO, with 4,377,000 p.e. It can be observed in this figure that the corresponding relative values are not so high in two of these countries (ES and IT), thus meaning that these countries have high amounts of p.e. In 20 Member States the distance to target is not beyond 0.5%. In five (BG, HU, SI, IT, EE) it is between 0.6 and 5.5%, while two (CY and RO) still have a distance to target of 17 and 26%, respectively. 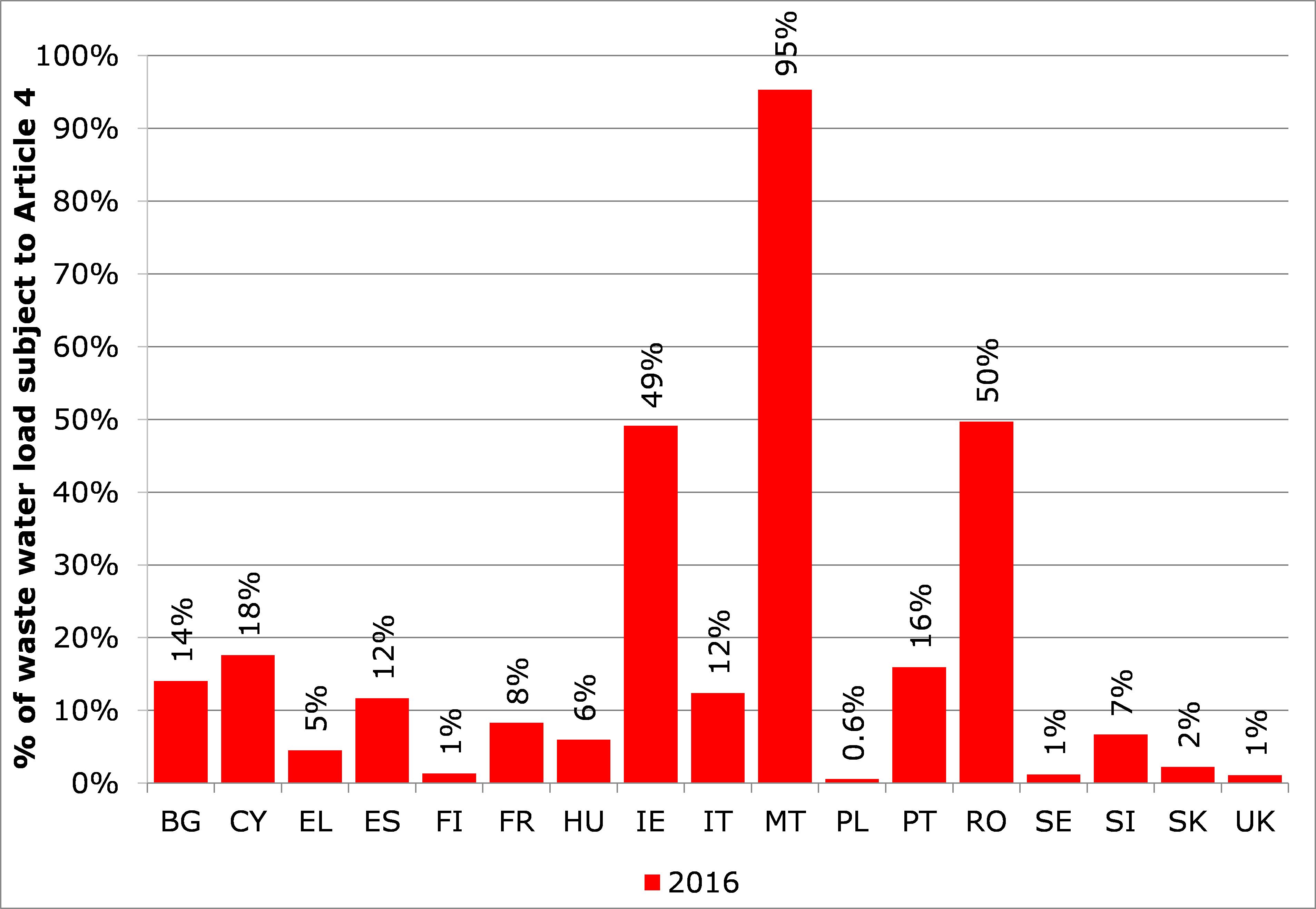 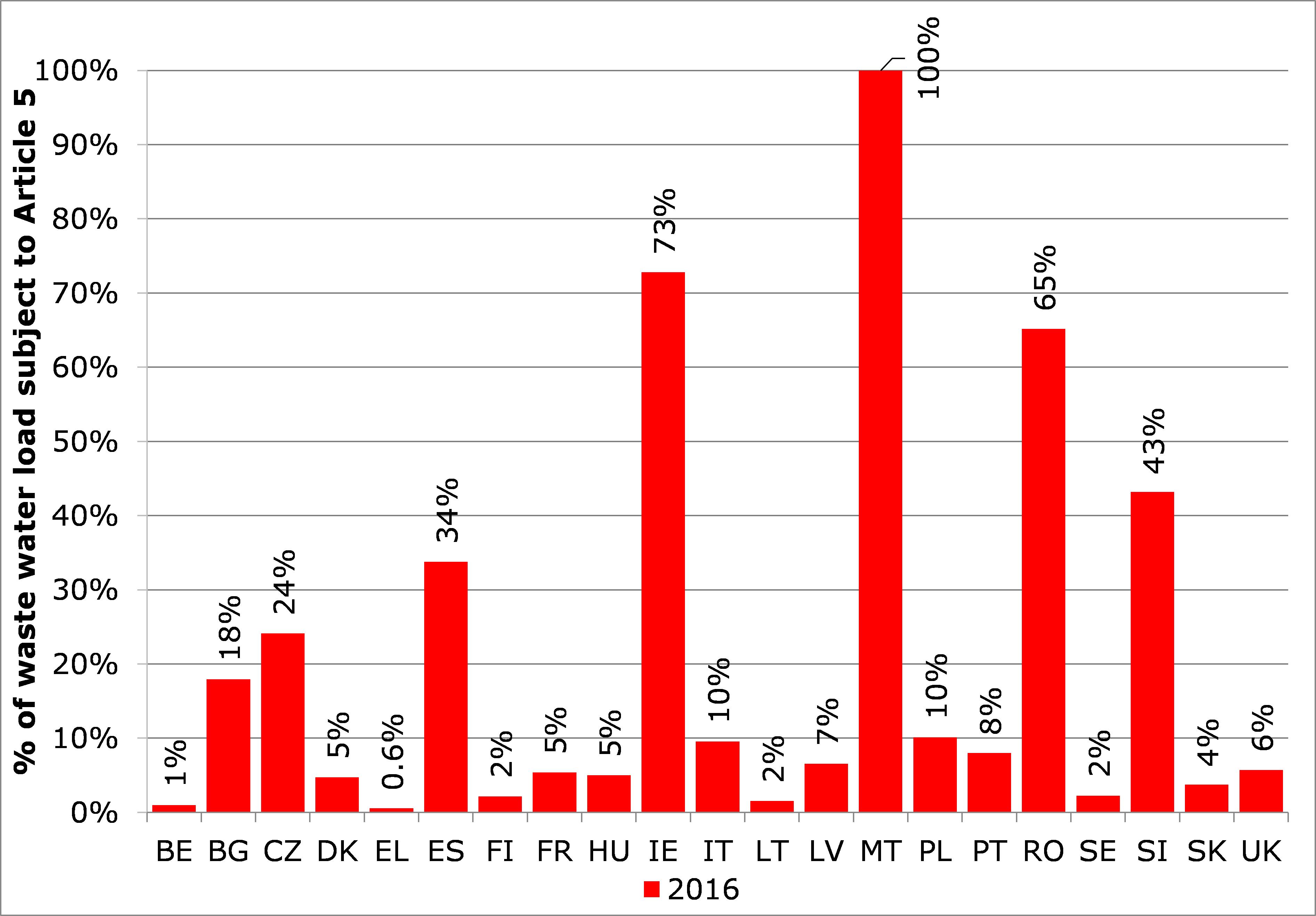 2.4.Rates of application of individual or other appropriate systems (IAS) in individual Member States

2.4.1.Classification by percentage of generated load connected to IAS

This figure shows how much IAS is used by depicting the percentage of generated load for each country reporting the use of IAS. Of the 19 EU countries reporting IAS use, three (SK, HU and EL) use it in more than 10% of the generated load.

2.4.2.Classification of Member States by number of agglomerations which apply more than 10% of IAS

It should be noted that a high number of agglomerations applying IAS does not necessarily entail a high IAS rate at country level. It indicates that many agglomerations rely, in a relatively high individual rate, on the use of IAS instead of collecting the generated waste waters in their entirety.

This table shows all the capital cities in the EU (all ‘big cities’ 2 ), ordered by size but sorted into groups: compliant (on top); subject to pending deadlines (Zagreb, Croatia); and totally or partially non-compliant, at the end of the table. All but three capitals have maintained their reported compliance status. Of the three, two (Copenhagen and Bucharest) are less compliant than at the time of the previous report. Bucharest, whose deadlines have now expired, still discharges 52% of its waste water untreated, while the treatment of the remaining 48% falls short of required standards, especially as regards the removal of nitrogen and phosphorus. Copenhagen has reported that the Damhusåen treatment plant has failed to reach the required level of performance as regards phosphorus treatment. Dublin became non-compliant in 2012, and the downward trend continued in 2016. Bratislava became fully compliant during the reporting period, an improvement on its previous status, especially in terms of treatment. The previous results are given in brackets wherever there has been a change. Most capitals are fully compliant with the Directive’s requirements.

In addition to legal compliance (/DTT), the values of distance to target in collection and treatment (what efforts are still required to reach compliance) are shown.

The table below lists Court rulings since 1 January 2017. 3

There are currently 29 open infringement cases. Most of the non-compliant agglomerations identified in the implementation reports are covered by these cases.

The vast majority of infringement cases listed below are ‘horizontal’, meaning that they cover groups of agglomerations within a Member State that are found, on the same legal basis, to be in breach of the legislation, usually in the same reported year.

All the deadlines laid down in the Directive have expired as regards the EU-14 Member States plus the UK. Most of the types of cases referred to above have thus already been launched, if needed. A few ‘gap cases’, based on 2016 results, have yet to be launched.

Some cases relating to the countries which joined the EU after 2004, corresponding to deadlines that expired in 2014 and 2015, have yet to be launched. In many of these cases, in particular, the Commission has also included an investigation of compliance by individual or other appropriate systems (IAS), where such systems are applied at relevant rates at the level of an agglomeration.

The tables below summarise information on investment programmes in 2016 as reported by all EU countries. The investment and work planned correspond to non-compliant situations. For those countries that are fully compliant, the table indicates ‘no data’. The national authorities collectively estimated the sum of all investment programmes across the EU in 2016 at nearly EUR 230 billion. This covers work on treatment plants, with a forecast investment cost of EUR 166 billion, and work on collecting systems and/or IAS, investment in which is forecast to cost EUR 63 billion.

As regards the expected yearly investment at national level in collection and treatment, nine countries report a static situation compared with previous reporting. Eight report an increase in investment, and three a decrease (IT, PT and SI).

The lowest values can be found in Spain (EUR -/14) and Portugal (EUR 4/2) per inhabitant and year. Both countries have medium-to-low compliance rates, especially as regards treatment.

The OECD study 5 estimates that Member States will need to spend an additional EUR 253 billion between 2020 and 2030 to reach and maintain full compliance with the UWWTD. Projections assume that all countries will meet compliance by 2030, and that they will make equal incremental progress each year towards reaching compliance, and adjust their expenditure accordingly. Total expenditure is thus calculated on the basis of both distance to compliance and change in population growth. The OECD estimates do not take account of possible delays in investment or investment backlogs or of the state of existing infrastructure, as there was no data available to assess these aspects. This may explain why country-specific assessments that take into account the state of the assets in question and the investment backlog may differ from OECD projections. The assessment, which builds on 2014 data, uses Eurostat and similar data sources. 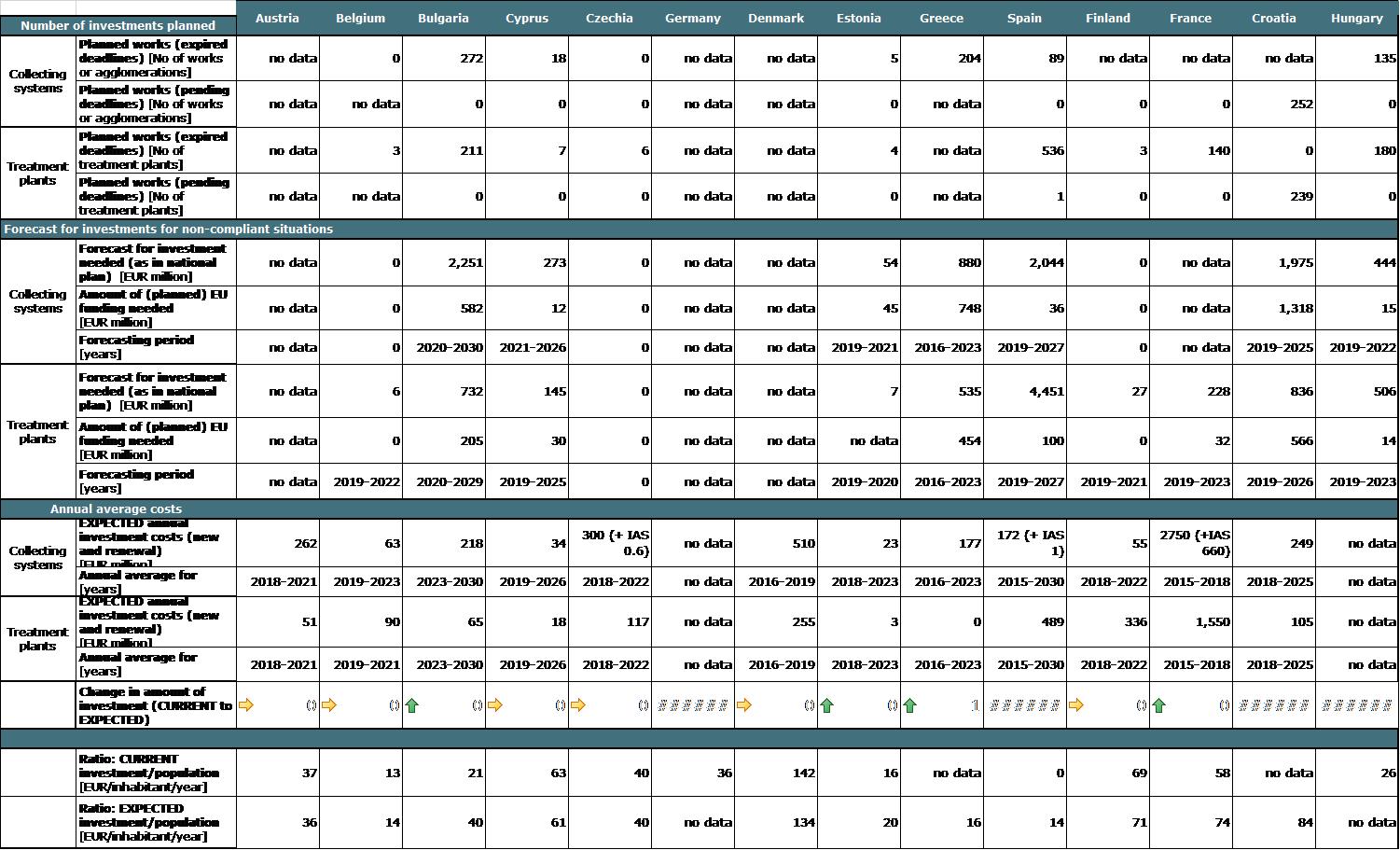 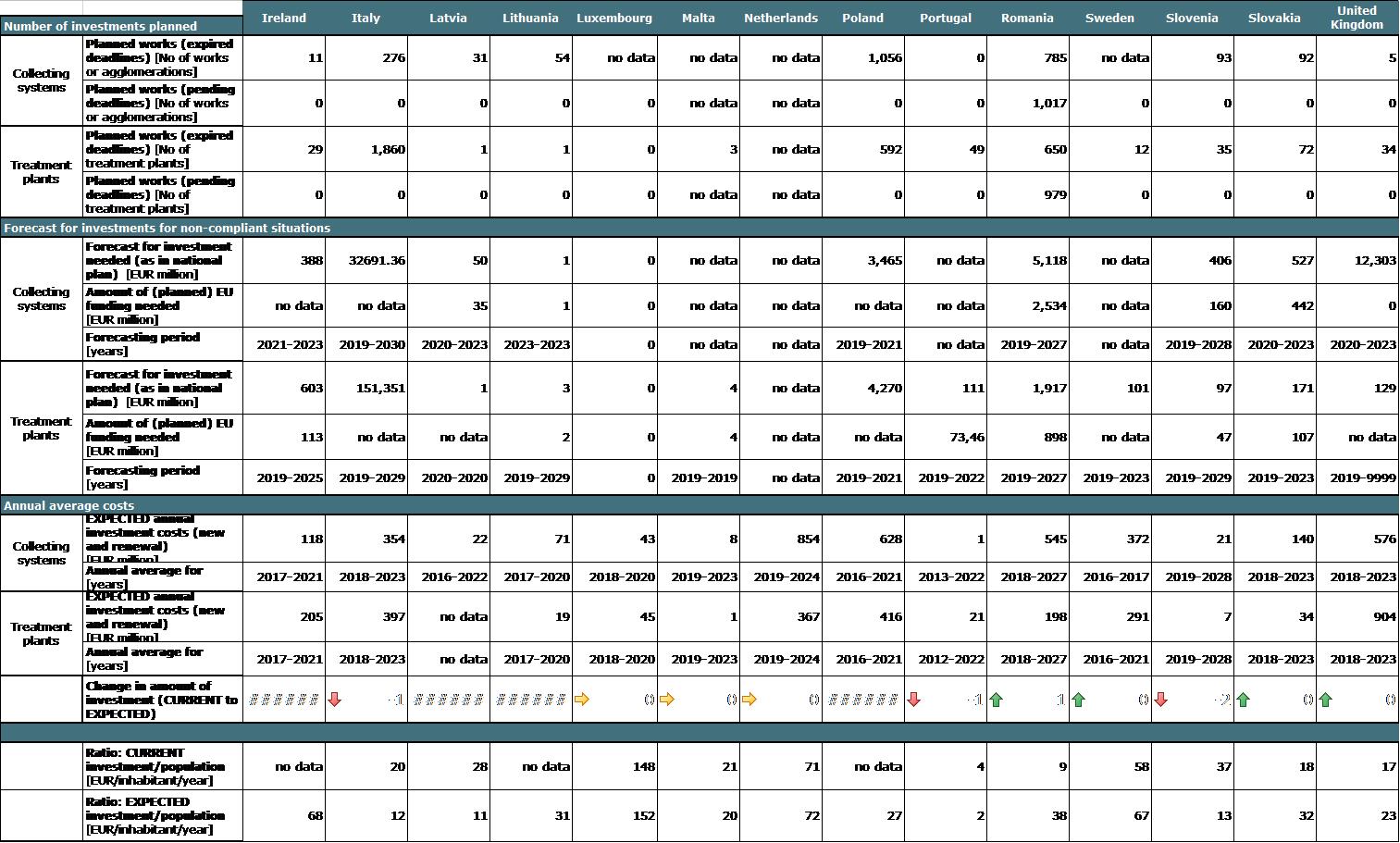 Malta shows a very high value in ‘distance to target’ for secondary treatment (95%). Excessive salt water in all treatment plants and farm manure discharges into collecting systems may explain the country’s poor performance.

Cities with more than 150,000 inhabitants, which may consist of one or more agglomerations.