Communication from the Commission — The recapitalisation of financial institutions (1) in the current financial crisis: limitation of aid to the minimum necessary and safeguards against undue distortions of competition

Common objectives: Restoring financial stability, ensuring lending to the real economy and dealing with the systemic risk of possible insolvency

Recommendations of the Governing Council of the European Central Bank (ECB)

2.2.   Temporary recapitalisations of fundamentally sound banks in order to foster financial stability and lending to the real economy

Prevention of undue distortions of competition

2.3.   Rescue recapitalisations of other banks

(1)  For the convenience of the reader, financial institutions are referred to simply as ‘banks’ in this document.

(5)  See point 39 of the Banking Communication.

(6)  All the references to exit incentives or incentives to redeem the State in this document have to be understood as aiming at the replacement of State capital by private capital to the extent necessary and appropriate in the context of a return to normal market conditions.

(8)  For example, a number of parameters increase or decrease the value of preferred shares, depending on their exact definition, such as: convertibility into ordinary shares or other instruments, cumulative or non-cumulative dividends, fixed or adjustable dividend rate, liquidation preference before ordinary shares, participation or not in earnings above dividend rate paid to ordinary shares, put option, redemption clauses, voting rights. The Commission will use the general classification of capital instrument among the different regulatory categories as a benchmark (e.g. core/non core, Tier 1/Tier 2).

(10)  Current levels of remuneration may also reflect present relatively high demand for Tier 1 capital, as banks move away from what is now perceived as the undercapitalised business model of the past, combined with relatively small supply and high market volatility.

(11)  See points 5 to 7 of the ECB Governing Council recommendations on the pricing of recapitalisations of 20 November 2008.

(12)  Specific situation of Member States outside the Eurosystem may have to be taken into account.

(14)  Taking into account the type of recapitalisation instrument and its classification by supervisory authorities.

(15)  This is all the more important as the method presented above may be affected by under-pricing of risk before the crisis.

(16)  Taking into account these considerations, restrictions on the payment of dividends could for example be limited in time or to a percentage of the generated profits, or linked to the contribution of new capital, (for example by paying out dividends in the form of new shares). Where the redemption of the State is likely to occur in several steps, it could also be envisaged to foresee the gradual relaxation on any restriction on dividends in tune with the progress of redemption.

(17)  Given the objectives of ensuring lending to the real economy, balance sheet growth restrictions are not necessary in recapitalisation schemes of fundamentally sound banks. This should in principle apply also to guarantee schemes, unless there is a serious risk of displacement of capital flows between Member States.

(19)  Taking into account the characteristics of the recapitalisation instrument.

(21)  The Commission has so far accepted recapitalisation measures with a total expected annualised return of at least 10 % for Tier 1 instruments for all banks participating in a scheme. For Member States with risk-free rates of return significantly divergent from the Eurozone average such a level may need to be adapted accordingly. Adjustments will also be necessary in function of developments of the risk-free rates.

(22)  See, as an example of a combination of a low entry price with such differentiation elements, the Commission Decision of 12 November 2008 in Case N 528/08 the Netherlands, Aid to ING Groep N.V. where for the remuneration of a sui generis capital instrument categorized as core Tier 1 capital a fixed coupon (8,5 %) is coupled with over-proportionate and increasing coupon payments and a possible upside, which results in an expected annualised return in excess of 10 %.

Equity (ordinary shares, common shares) is the best known form of core Tier 1 capital. Ordinary shares are remunerated by uncertain future dividend payments and the increase of the share price (capital gain/loss), both of which ultimately depend on the expectations of future cash flows/profits. In the current situation, a forecast of future cash flows is even more difficult than under normal conditions. The most noticeable factor, therefore, is the quoted market price of ordinary shares. For non-quoted banks, as there is no quoted share price, Member States should come to an appropriate market-based approach, such as full valuation.

If assistance is given in the issuance of ordinary shares (underwriting), any shares not taken up by existing or new investors will be taken up by the Member State as underwriter at the lowest possible price compared to the share price immediately prior to the announcement of placing an open offer. An adequate underwriting fee should also be payable by the issuing institution (1). The Commission will take into account the influence that previously received State aid may have on the share price of the beneficiary.

Indicators for the assessment of a bank's risk profile

In evaluating a bank's risk profile for the purpose of the appreciation of a recapitalisation measure under State aid rules, the Commission will take into account the bank's position in particular with respect to the following indicators:

In the evaluation of these indicators, account needs to be taken of the situation of banks which face difficulties due to the current exceptional circumstances, although they would have been regarded as fundamentally sound before the crisis, as shown, for instance, by the evolution of market indicators such as CDS spreads and share prices. 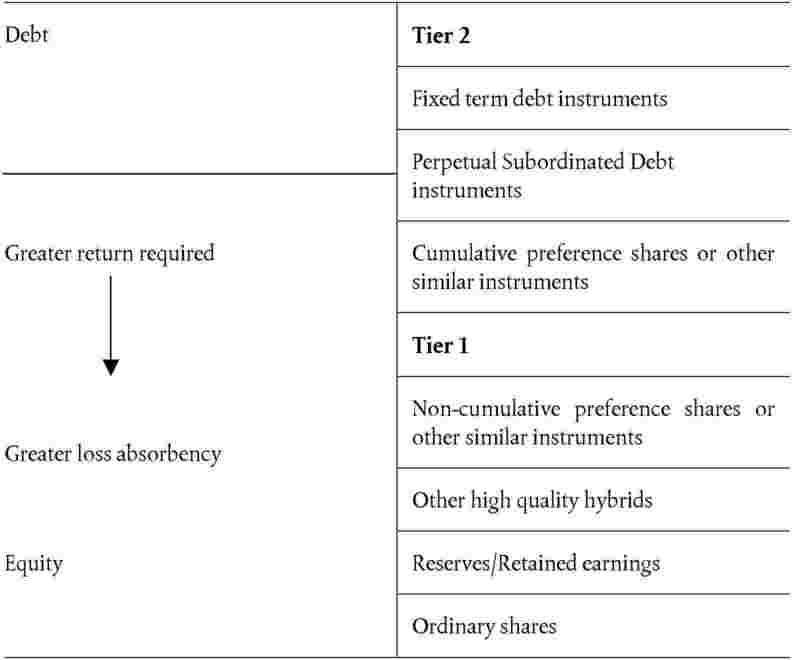