Having regard to Decision No 676/2002/EC of the European Parliament and of the Council of 7 March 2002 on a regulatory framework for radio spectrum policy in the European Community (Radio Spectrum Decision) (1), and in particular Article 4(3) thereof,

(4)  Communication from the Commission to the European Parliament, the Council, the European Economic and Social Committee and the Committee of the Regions ‘Connectivity for a Competitive Digital Single Market – Towards a European Gigabit Society’ COM(2016) 587 final.

(5)  Communication from the Commission to the Council, the European Parliament, the European Economic and Social Committee and the Committee of the Regions ‘5G for Europe: An Action Plan’, COM(2016) 588 final.

PARAMETERS REFERRED TO IN ARTICLE 2(1)

Equivalent isotropically radiated power (EIRP) is the product of the power supplied to the antenna and the antenna gain in a given direction relative to an isotropic antenna (absolute or isotropic gain).

where P(θ,φ) is the power radiated by an antenna array system in direction (θ,φ) given by the formula:

Within the paired terrestrial 2 GHz band, the frequency arrangement shall be as follows:

The following technical parameters for base stations called Block Edge Mask (BEM) are an essential component of conditions necessary to ensure coexistence between neighbouring networks, in the absence of bilateral or multilateral agreements between operators of such neighbouring networks. Less stringent technical parameters, if agreed among all affected operators of such networks, may also be used provided that these operators continue to comply with the technical conditions applicable for the protection of other services, applications or networks and with obligations resulting from cross-border coordination. 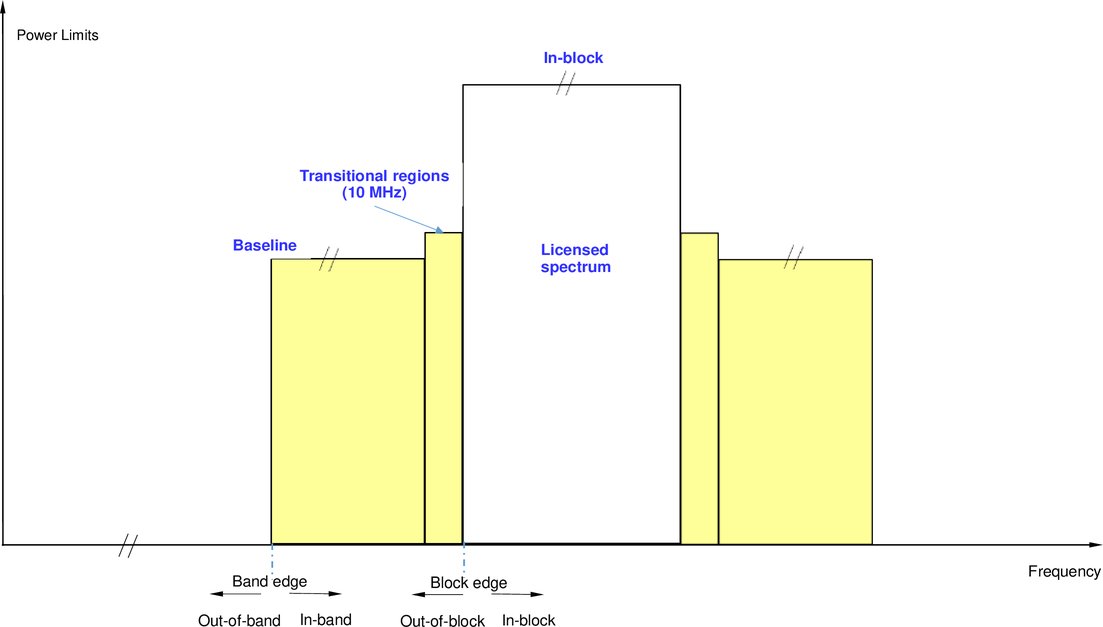 In-block power limits for non-AAS and AAS base stations

The corresponding in-block TRP limit is determined following guidelines given in ETSI TS 138 104 V15.6.0, Annex F, sections F.2 and F.3, on the basis of an antenna gain of 17 dBi and a total of eight beam forming antenna elements (scaling factor of 9 dB):

Explanatory note to Tables 3 and 4:

In alignment with the standardisation of unwanted emission conducted power (TRP) for AAS base stations in ETSI TS 138 104 (V15.6.0), Annex F, sections F.2 and F.3, the out-of-block TRP limits are set to a value that corresponds to a total of eight beam forming antenna elements, resulting in 8 dB difference between AAS and non-AAS as for the in-block case.

Member States may relax this limit for specific deployments, e.g. fixed terminal stations in rural areas provided that protection of other services, networks and applications is not compromised and cross-border obligations are fulfilled.

(1)  As the UMTS channel spacing is 200 kHz, the centre frequency of an assigned block used for UMTS can be offset 100 kHz from the centre of the block in the frequency arrangement.

(2)  Such as Supplemental UpLink (SUL)

(3)  Such as Supplemental DownLink (SDL)

(4)  TRP is a measure of how much power the antenna actually radiates. EIRP and TRP are equivalent for isotropic antennas

(6)  In a multi-sector base station, the AAS radiated power limit applies to each one of the individual sectors.

(7)  The non-AAS BEM level is defined per antenna and applicable to base station configuration with up to four antennas per sector.

(8)  In a multi-sector base station, the AAS radiated power limit applies to each one of the individual sectors.

(10)  In a multi-sector base station, the AAS radiated power limit applies to each one of the individual sectors.

(11)  This power limit is specified as EIRP for terminal stations designed to be fixed or installed and as TRP for terminal stations designed to be mobile or nomadic. EIRP and TRP are equivalent for isotropic antennas. It is recognised that this value may be subject to a tolerance defined in the harmonised standards to take account of operation under extreme environmental conditions and production spread.