THE GOVERNMENT OF THE PEOPLE'S REPUBLIC OF CHINA,

NOTING with satisfaction the development of friendly relations between the European Economic Community and the People's Republic of China,

CONSIDERING that the Trade Agreement between the European Economic Community and the People's Republic of China, signed on 3 April 1978, has been satisfactorily applied,

INSPIRED by their common will to introduce a new stage into their commercial and economic relations,

DESIRING on the basis of equality and mutual advantage, to intensify and diversify their trade and actively develop economic and technical cooperation in line with their mutual interests,

HAVE DECIDED TO CONCLUDE THIS AGREEMENT, THE TERMS OF WHICH ARE AS FOLLOWS:

The two Contracting Parties will endeavour, within the framework of their respective existing laws and regulations, and in accordance with the principles of equality and mutual advantage:

1.   In their trade relations, the two Contracting Parties shall accord each other most-favoured-nation treatment in all matters regarding:

The two Contracting Parties will make every effort to foster the harmonious expansion of their reciprocal trade and to help, each by its own means, to attain a balance in such trade.

Should an obvious imbalance arise, the matter must be examined within the Joint Committee so that measures can be recommended in order to improve the situation.

1.   The People's Republic of China will give favourable consideration to imports from the European Economic Community. To this end, the competent Chinese authorities will ensure that Community exporters have the possibility of participating fully in opportunities for trade with China.

2.   The European Economic Community will strive for an increasing liberalization of imports from the People's Republic of China. To this end it will endeavour progressively to introduce measures extending the list of products for which imports from China have been liberalized and to increase the amounts of quotas. The procedure for implementation will be examined within the framework of the Joint Committee.

1.   The two Contracting Parties shall exchange information on any problems that may arise with regard to their trade and shall open friendly consultations, with the intention of promoting trade, for the purpose of seeking mutually satisfactory solutions to those problems. Each of the two Contracting Parties will ensure that no action is taken before consultations are held.

2.   In an exceptional case, however, where the situation does not admit any delay, either Contracting Party may take measures, but must endeavour as far as possible to hold friendly consultations before doing so.

3.   Each Contracting Party will ensure that when it takes the measures referred to in paragraph 2, the general objectives of this Agreement are not prejudiced.

The two Contracting Parties undertake to promote visits by persons, groups and delegations from economic, trade and industrial circles, to facilitate industrial and technical exchanges and contracts connected with trade and to foster the organization of fairs and exhibitions by both sides and the relevant provision of services. As far as possible, they must grant each other the necessary facilities for the above activities.

Trade in goods and the provision of services between the two Contracting Parties shall be effected at market-related prices and rates.

The two Contracting Parties agree that payments for transactions shall be made, in accordance with their respective existing laws and regulations, in currencies of the Member States of the Community, Renminbi or any convertible currency accepted by the two parties concerned in the transactions.

Within the limits of their respective competence, and with the main aims of encouraging the development of industry and agriculture in the European Economic Community and in the People's Republic of China, of diversifying their economic links, encouraging scientific and technological progress, opening up new sources of supply and new markets, helping to develop their economies and raise their respective standards of living, the two Contracting Parties agree to develop economic cooperation in all the spheres subject to common accord, and in particular:

According to their needs and within the means at their disposal and as far as they are able, the two Contracting Parties shall encourage the application of the various forms of industrial and technical cooperation, for the benefit of their undertakings or organizations.

In order to attain the objectives of this Agreement, the two Contracting Parties shall endeavour to facilitate and promote, among other activities:

1.   In order to attain the objectives of this Agreement, the two Contracting Parties shall agree, within the framework of their respective laws, rules and policies, to promote and encourage greater and mutually beneficial investment.

2.   In addition, the Parties undertake to improve the existing favourable investment climate in particular through encouraging the extension, by and to the Member States of the Community and by and to the People's Republic of China, of investment promotion and protection arrangements based on the principles of equity and reciprocity.

It confirms its willingness to examine the possibility of stepping up and diversifying these activities.

Without prejudice to the relevant provisions of the Treaties establishing the European Communities, this Agreement and any action taken thereunder shall in no way affect the powers of any of the Member States of the Communities to undertake bilateral activities with the People's Republic of China in the field of economic cooperation and conclude, where appropriate, new economic cooperation agreements with the People's Republic of China.

2.   The tasks of the Joint Committee shall be as follows:

This Agreement replaces the Trade Agreement between the European Economic Community and the People's Republic of China of 3 April 1978, which entered into force on 1 June 1978.

This Agreement shall enter into force on the first day of the month following the date on which the Contracting Parties have notified each other of the completion of the legal procedures necessary for this purpose. It is concluded for a period of five years. The Agreement shall be tacitly renewed from year to year provided that neither Contracting Party notifies the other Party in writing of its denunciation of the Agreement six months before the date of expiry.

However, the Agreement may be amended by mutual consent of the two Contracting Parties in order to take account of new situations.

In witness whereof, the undersigned, being duly authorized thereto, have signed this Agreement.

Done at Brussels on the twenty-first day of May in the year one thousand nine hundred and eighty-five, in two copies in the Danish, Dutch, English, French, German, Greek, Italian and Chinese languages, each text being equally authentic.

For Rådet for De europæiske Fællesskaber

For the Council of the European Communities 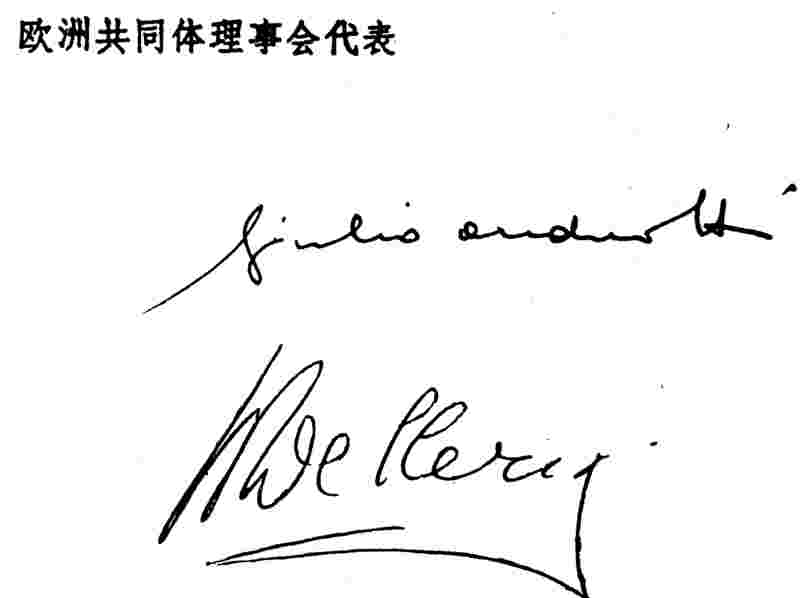 For regeringen for Den kinesiske Folkerepublik

For the Government of the People's Republic of China 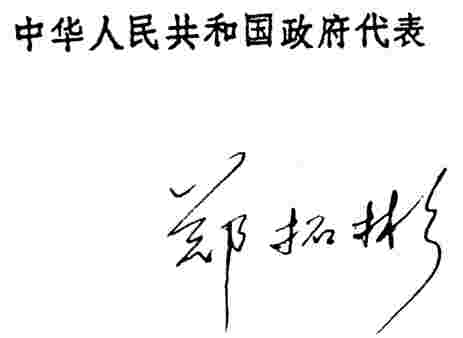