REPORT FROM THE COMMISSION

REPORT FROM THE COMMISSION

In 2005, the European Union (EU) adopted Regulation (EC) No 2173/2005 1 of 20 December 2005 on the establishment of a FLEGT licensing scheme for imports of timber into the European Community (hereinafter the FLEGT Regulation), as part of the implementation of the 2003 EU Action Plan on Forest Law Enforcement, Governance and Trade (FLEGT) 2 . In 2008, the Commission also adopted Implementing Regulation (EC) No 1024/2008 3 laying down detailed measures for the implementation of the FLEGT Regulation.

The FLEGT Regulation lays down rules for the implementation of the FLEGT licensing scheme through the conclusion of Voluntary Partnership Agreements (VPAs) with timber producing countries, including a requirement for imports into the EU of timber products originating in FLEGT partner countries to be covered by a FLEGT licence.

The FLEGT licensing scheme became operational on 15 November 2016 with Indonesia. In 2017, Indonesia was the only country to operate such scheme.

In accordance with Article 8(1) of the FLEGT Regulation, Member States are required to submit an annual report covering the previous calendar year.

In line with Article 8(3), the Commission then prepares and makes public an annual synthesis report based on the information submitted by the Member States in their annual reports.

This second report 4 provides an analysis of the first full year of implementation of the FLEGT licensing scheme across the EU and outlines conclusions and next steps.

A more detailed analysis of the national reports, prepared for the Commission by UNEP-WCMC, is available on the Commission website 5 . It indicates that only 21 Member States submitted their report within the deadline.

In line with Article 8(1) of the FLEGT Regulation, Member States report on:

(a)quantities of timber products imported into the Member State under the FLEGT licensing scheme, as per Harmonised System (HS) Commodity Heading specified in Annexes II and III and per each partner country;

(b)the number of FLEGT licences received 6 , as per HS Heading specified in Annexes II and III and per each partner country;

(c)the number of cases and quantities of timber products involved where Article 6(1) -on shipments not covered by a FLEGT licence- has been applied 7 .

To facilitate the reporting by the Member States, a reporting format was laid down by the Commission in line with Article 8(2). To facilitate the monitoring of the FLEGT licensing scheme, the format includes not only the data required under Article 8(1), but also essential information on the key obligations of Member States under the FLEGT Regulation (e.g. designated Competent Authority/ies, penalties), as well as information on practical aspects of the implementation of the scheme.

The reporting format was updated for the 2017 reporting exercise, taking into account relevant experience gained from the first reporting exercise covering the year 2016. The format was agreed upon with the Member States in the FLEGT/EUTR Expert Group. Furthermore, to reduce the administrative burden, reporting was done through an online survey, with some sections pre-filled with information provided in the previous report.

The FLEGT Regulation requires Member States to designate Competent Authority/ies and to adopt effective, proportionate and dissuasive penalties to enforce the Regulation. The national reports are a means to assess the status of implementation and the level of consistency achieved across the Member States.

2.2Quantities of timber imported and related number of FLEGT Licences 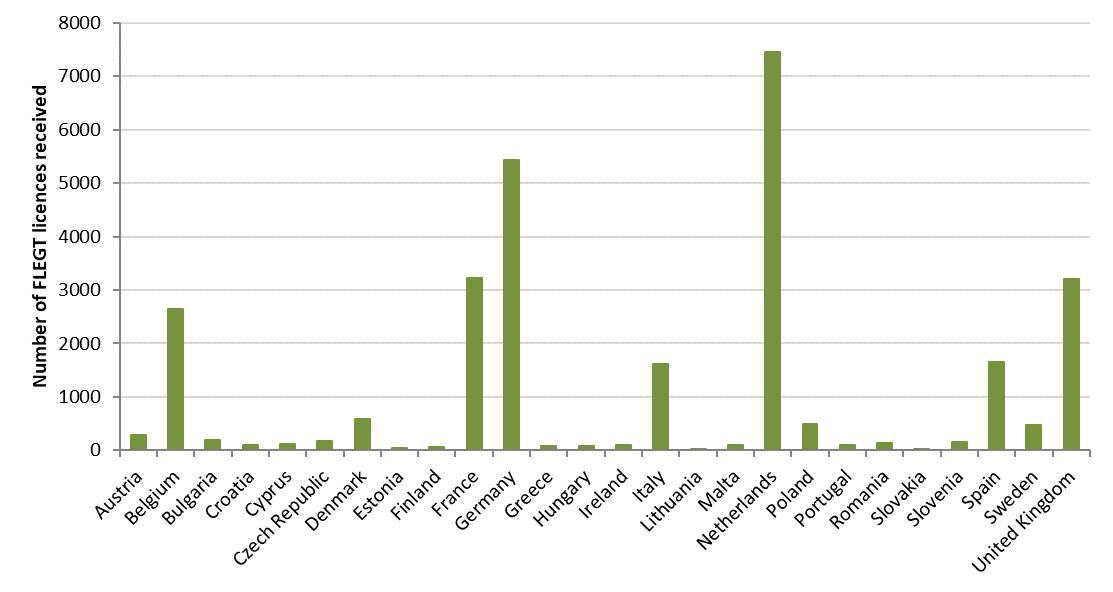 Over 658 million kg of FLEGT-licensed timber and timber products were reported on validated FLEGT licences in 2017 9 , 10 . The main FLEGT-licensed product types imported into the EU by weight included paper products (HS 4802 and 4803), furniture (HS 9403 and 9401), plywood, veneered panels and similar laminated wood (HS 4412), builder’s joinery and carpentry (HS 4418), and continuously shaped wood (HS 4409) (Figure 2). The main importing Member States for these products are shown in Figure 3. 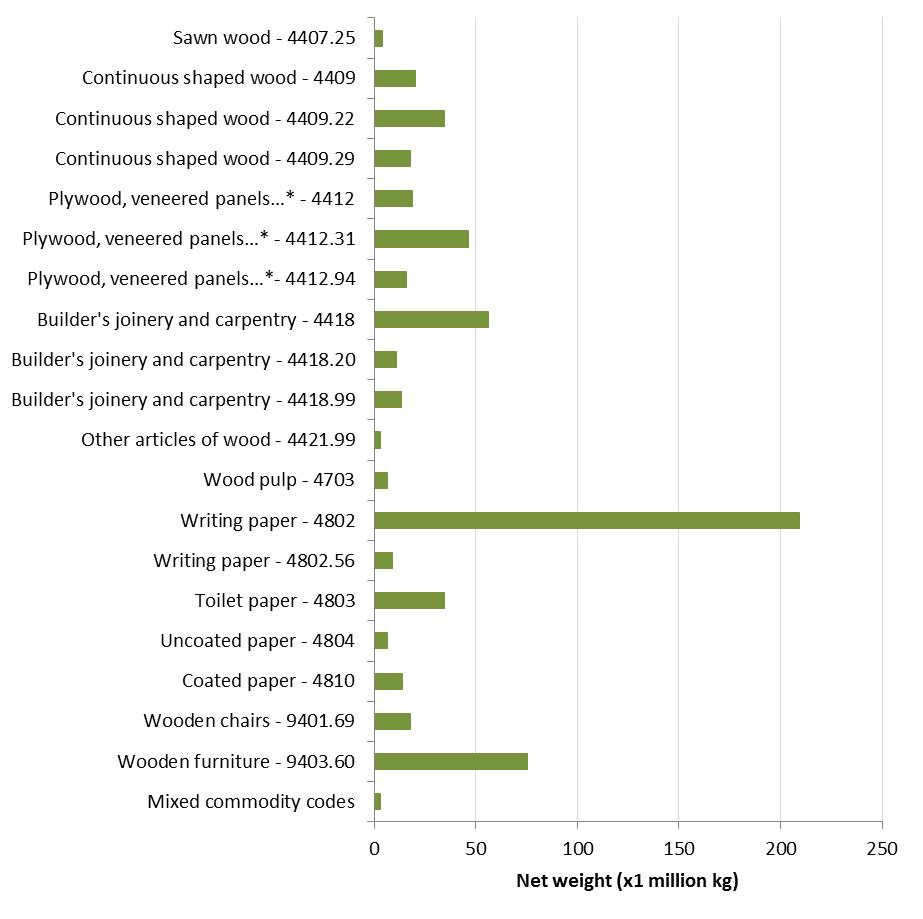 Figure 2: Quantities of FLEGT-licensed products reported by HS code** on validated FLEGT licences from Indonesia into the EU in 2017, reported by weight (kg)*** (see Annex A for full description of the HS codes). ** Where possible, HS codes were reconciled to 6 digits; 4-digit HS codes only include trade reported by Member States at the 4 digit level.  *** Quantity was reported by weight on 28 331 (>99%) of FLEGT licences, which may not be representative of all trade.

Figure 3:    Main EU importing Member States for the six main FLEGT-licensed products reported by HS code* on validated FLEGT licences from Indonesia into the EU in 2017, reported by weight (kg) (see Annex A for full description of the HS codes). * Where possible, HS codes were reconciled to 6 digits; 4-digit HS codes only include trade reported by Member States at the 4 digit level.

Information on taxa in trade was provided by 23 of the 26 Member States reporting trade in 2017. Hungary, the Netherlands and the United Kingdom, which together accounted for 311.1 million kg of timber on validated FLEGT licences, did not provide information about the species in trade. In addition to this, over 498,000 kg of timber on validated FLEGT licences was reported without taxa by the other 23 Member States.

In total, 115 different species and 57 higher taxa (e.g. genera) were individually reported on validated FLEGT licences in 2017 (comprising 176.5 million kg), along with a further 170.7 million kg of mixed taxa shipments. Where individual taxa were specified, the most highly traded taxa by weight were Acacia mangium (mangium), Shorea (meranti) and Tectona grandis (teak).

A total of 218 physical inspections of FLEGT-licensed shipments were carried out by 12 Member States in 2017, with the shipment matching the details of the FLEGT licence in 94.6% of the cases.

The Commission, in line with Article 3(2) of implementing Regulation (EC) 1024/2008, has provided –and continues to provide when necessary– the Member States with the names and other relevant details of the Licensing Authorities designated by Indonesia, authenticated specimens of stamps and signatures for each Licensing Authority, and specimens of the FLEGT licence template used by Indonesia.

Article 5(8) of the FLEGT Regulation provides that "each Member State shall determine the penalties to be imposed where the provisions of this Regulation are infringed. Such penalties shall be effective, proportionate and dissuasive." Eighteen Member States have provisions in place for administrative fines, 16 for criminal fines, 20 to impose imprisonment, 5 to suspend the authority to trade and 8 for notices of remedial action or warning letters. Potential maximum penalties for imprisonment range from 1 month to 15 years (16 Member States reported maximum potential penalties of 1-5 years). 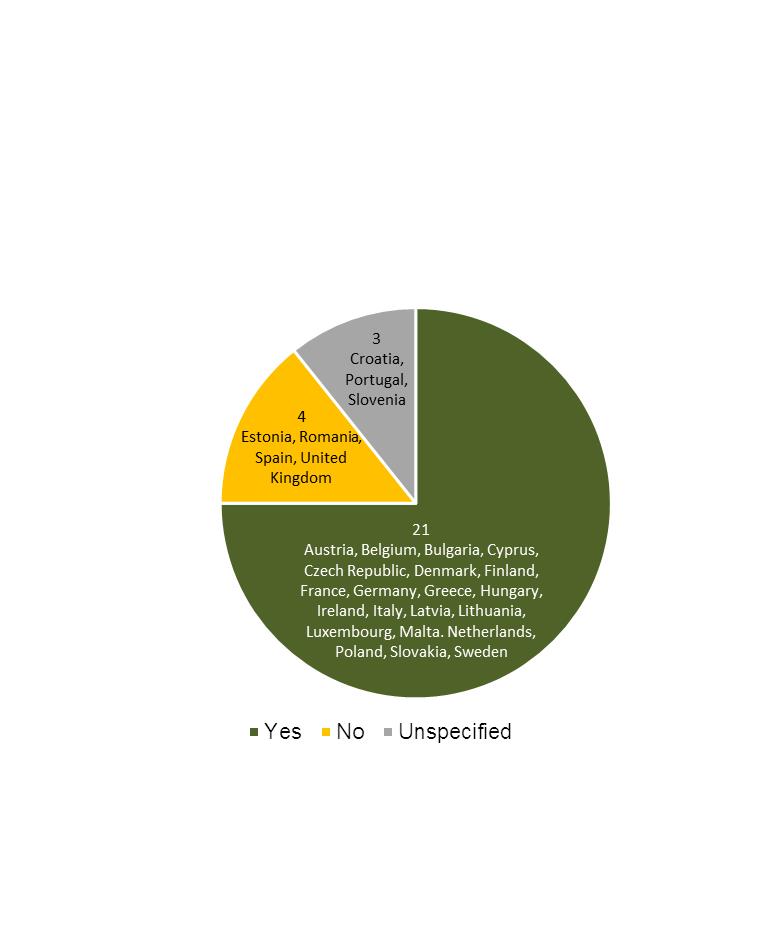 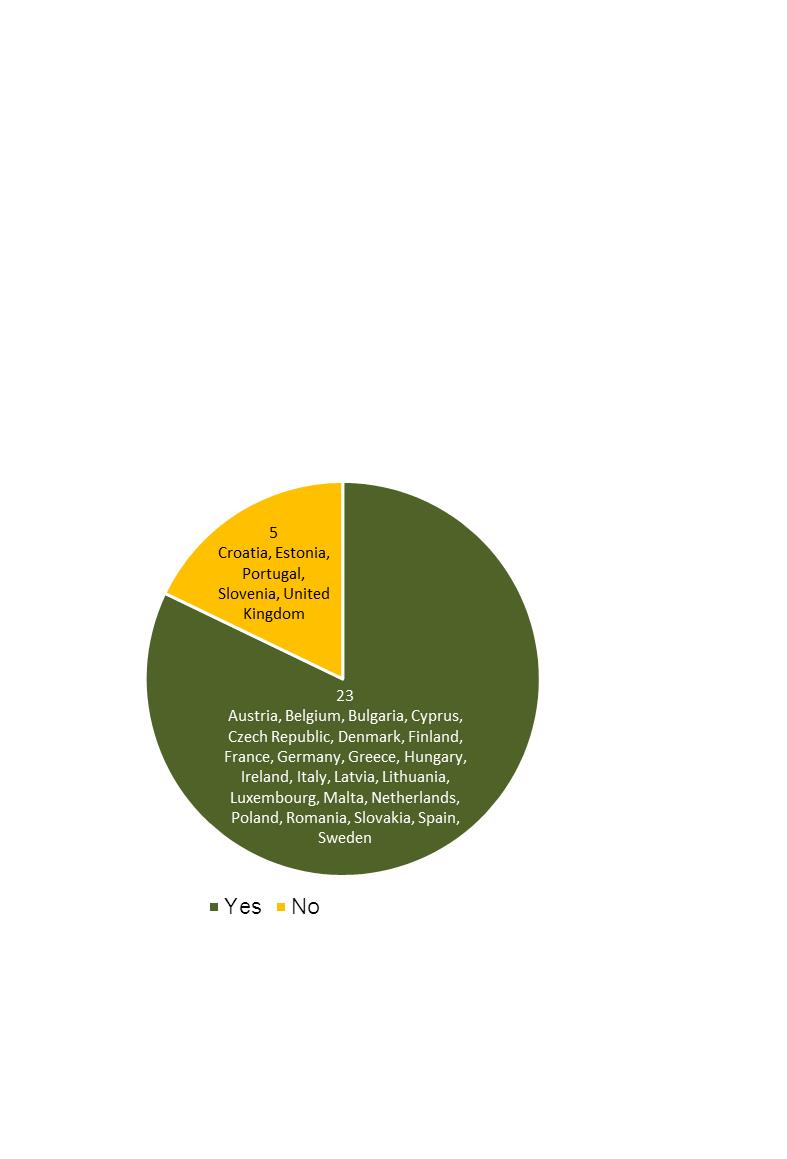 Figure 4: Member States with (A) penalties that include the seizure or confiscation of timber shipments, (B) provisions for the disposal of confiscated timber established in their national legislation. 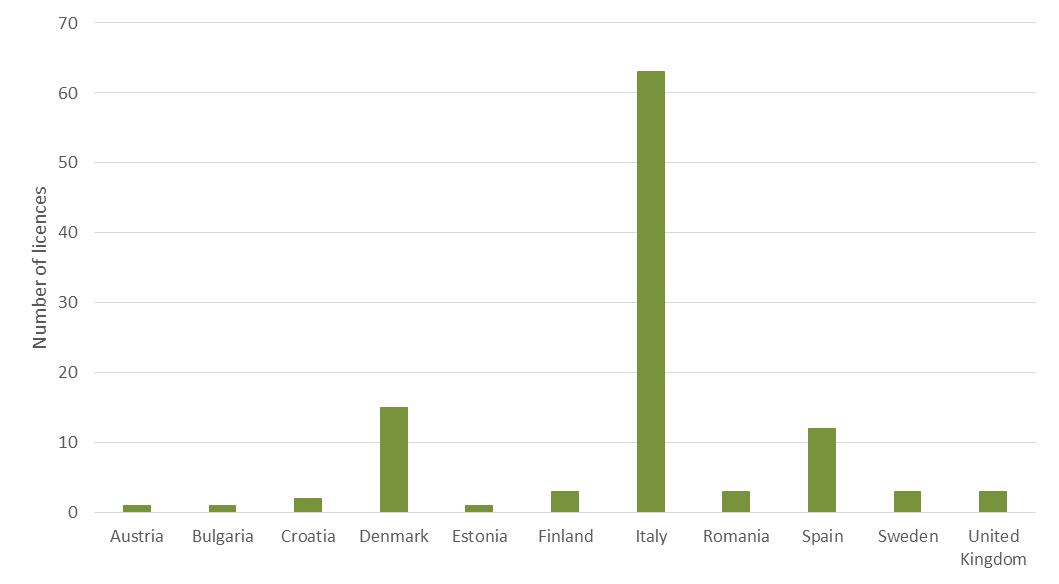 Figure 5: Number of FLEGT licences not approved in 2017.

Member States may charge fees for the processing of FLEGT licences, as per Article 5(6) of the FLEGT Regulation. Six Member States reported doing so, with fees ranging from around EUR 11 (GBP 9.60) to up to EUR 105.90 (Annex B, Table 3).

Twenty-one Member States provided information on other implementing measures and challenges. Ten of these reported collaborating with other CAs and 6 with the European Commission; these collaborations were considered to be positive. Several implementation challenges were raised by one or more Member States, including: the need for more practical guidance on implementing the FLEGT Regulation on the ground (e.g. for customs officers), making FLEGIT more user friendly, and giving CAs greater access to data on SILK. Member States also commented on issues arising from receiving incomplete or damaged FLEGT licences, on issues with mismatching information between FLEGT licences and customs declarations, and on the administrative burden of resolving these issues.

The second report on the implementation of the FLEGT licensing scheme shows that it has progressed well. In 2017 -the first full year of implementation of FLEGT licensing scheme- 28,826 licences were received, of which over 98% (accounting for over 658 million kg of timber and timber products) were approved. Positive collaboration has been reported between CAs and with the Commission. The number of Member States charging fees for processing FLEGT licenses increased, with a smaller range of fees compared to the one previously reported.

Some challenges still remain, including mismatching information between FLEGT licences and customs declarations, and restricted access of Member States to data on SILK.

In parallel, the Commission will continue to work closely with the Indonesian authorities to address the issues and challenges identified above, as part of the broader discussions on the implementation of the EU-Indonesia FLEGT VPA and monitoring of its impacts. The Commission has also launched pilot work with Indonesia on the integration of the respective IT systems, i.e. FLEGIT/TRACES, with SILK, towards a fully electronic-based licensing system in the future.

Table 1: Criteria used to determine whether additional verification of a FLEGT licence was required, where reported by Member States.

** Text in square brackets ‘[ ]’ has been translated or summarised from comments provided by the Member States.

Table 2: Criteria used to determine whether additional verification of a FLEGT licensed shipment was required, where reported by Member States.

** Belgian CA is planning to do additional risk based checks (species, volume, HS codes, country of origin) in collaboration with customs.

*** Spain: customs check that the weight of shipments do not exceed 10% of the weight indicated on the licence.

Table 3: Approximate levels of fees and basis of calculation for those Member States charging importers for the processing of FLEGT licences

i.e. the number of licences lodged with the CA

i.e. acting in accordance with national legislation in cases of shipments not covered by a FLEGT licence

This report only includes data from FLEGT licences. Although Member States reported data from customs declarations, these were not always directly comparable with the data on FLEGT licences, due to the use of different units of measure.

FLEGIT/TRACES is a web application - a component of the TRACES NT system (TRAde Control and Expert System, New Technology) - and can be used by EU importers and their agents, the Member States’ FLEGT Competent Authorities and the EU customs for the electronic verification and management of FLEGT Licences in a quick and secure way.

This may include FLEGT licences that were rejected and those that were ignored (e.g. cases where a FLEGT licence was submitted for timber products not covered by the VPA with Indonesia).

Article 6(1) states that, if Competent Authorities establish that a shipment is not covered by a FLEGT license and its import is thus prohibited, they shall act in accordance with their national legislation in force.

Article 6(2): Member States shall notify the Commission of any information suggesting that the provisions of this Regulation are being, or have been, circumvented.