This Regulation sets out the common European risk classification scheme (ERCS) for the determination of the safety risk of an occurrence.

For the purposes of this Regulation, the following definitions shall apply:

3.   The ERCS shall be based on the ERCS matrix composed of the following two variables:

The ERCS shall consist of the following two steps:

STEP 1: DETERMINATION OF THE VALUES OF THE VARIABLES

1.   Severity of the potential accident outcome

The identification of the severity of the potential accident outcome shall follow the following two steps:

There are following key risk areas:

The potential loss of life shall be categorised in the following way:

The severity of the accident shall result in one of the following severity scores:

The severity score shall be calculated by combining the key risk area and the potential loss of life as laid down in the following table:

2.   Probability of the potential accident outcome

The probability of the worst likely accident outcome shall be obtained by using the ERCS barrier model defined in Section 2.1.

The purpose of the ERCS barrier model is to assess the effectiveness (that is the number and the strength) of the barriers in the safety system laid down in the Table in Section 2.1.1 which were remaining between the actual occurrence and the worst likely accident outcome. Ultimately, the ERCS barrier model shall determine how close the occurrence under assessment has been to the potential accident.

The ERCS barrier model consists of 8 barriers, ordered in a logical sequence and weighted as per the following table:

The effectiveness of each barrier shall be classified as follows:

The barriers shall be assessed in two steps:

Step 1: To identify which of the barriers defined in the table in section 2.1.1. (1-8) stopped the occurrence from escalating into the potential accident outcome (referred to as the ‘stopping barrier’).

The probability of the potential accident outcome is the numerical value resulting of the following steps:

Step 1: A sum of all the barrier weights (1 to 5) laid down in the table in section 2.1.1 of all the assessed barriers that were scored either ‘Stopped’, ‘Remaining known’ or ‘Remaining assumed’. The ‘Failed’ and ‘Not Applicable’ barriers shall not be counted for the final score, as those barriers could not have prevented the accident. The resulting barrier weight sum is a numerical value between 0 and 18.

Step 2: The barrier weight sum corresponds to a barrier score between 0 and 9 as per the following table, covering the full range between strong and weak remaining barriers.

STEP 2: SCORING OF THE SAFETY RISK WITHIN THE ERCS MATRIX

The safety risk score shall be put into the ERCS matrix.

The ERCS matrix reflects the safety risk score and the numerical associated figures of an occurrence as follows: 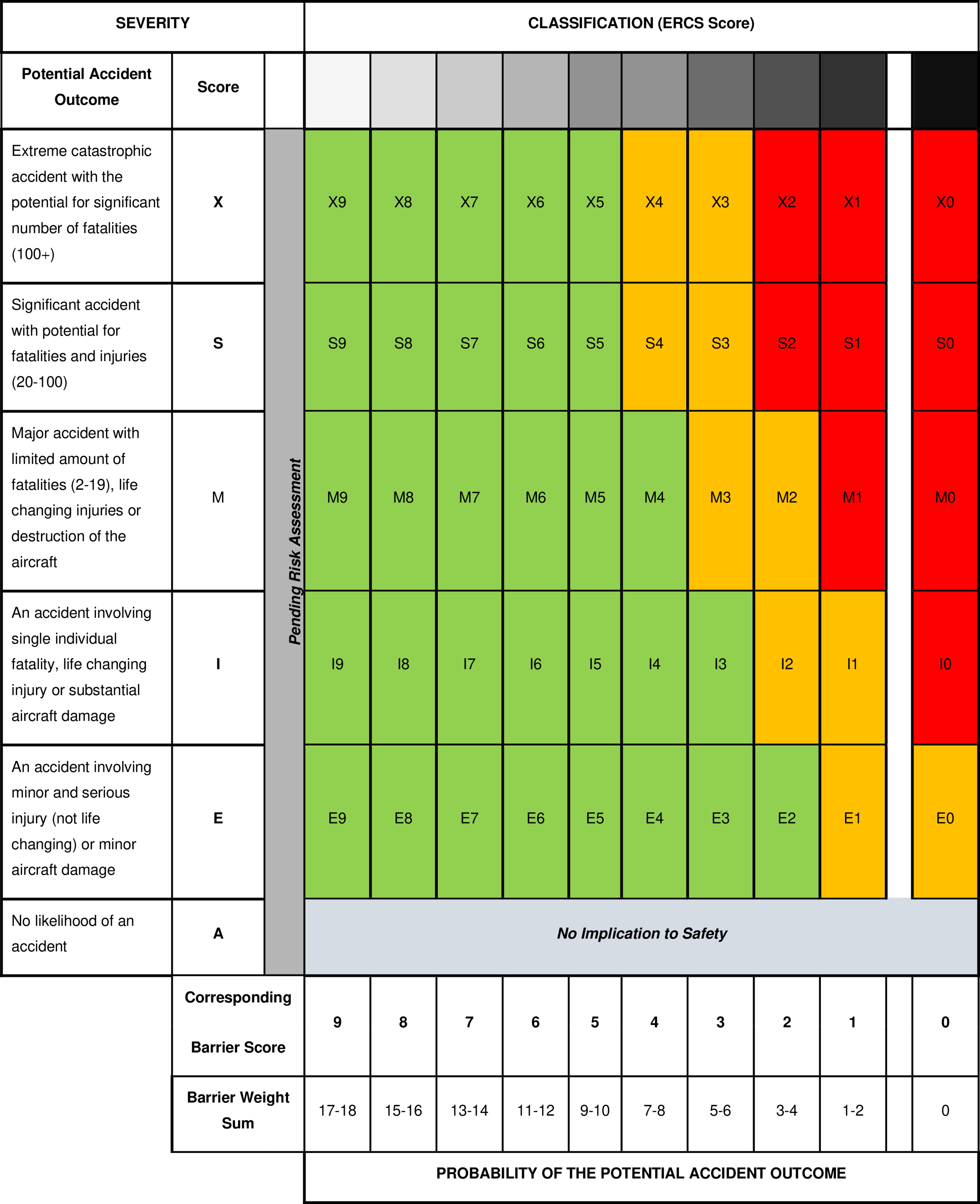 In addition to the safety risk score and to facilitate the determination of the urgency of the recommended action to be taken about the occurrence, the following three colours could be used in the ERCS matrix:

The green area of the matrix contains lower risk values. They provide data for in-depth analysis on safety related occurrences that could, either in isolation or in conjunction with other events, increase the risk values of such occurrences.

Each ERCS score is assigned a corresponding numerical value of risk magnitude to facilitate the aggregation and numerical analysis of multiple occurrences with an ERCS score:

Both column 10 and the row A in the matrix bear the value 0 as the corresponding numerical value.