on certain parts and characteristics of wheeled agricultural or forestry tractors

1.   ‘Tractor’ (agricultural or forestry) means any motor vehicle, fitted with wheels or endless tracks and having at least two axles, the main function of which lies in its tractive power and which is specially designed to tow, push, carry or power certain tools, machinery or trailers intended for agricultural or forestry use. It may be equipped to carry a load and passengers.

1.   No Member State may refuse to grant EC type-approval or national type-approval in respect of a type of tractor on grounds relating to the following parts and characteristics, if these satisfy the requirements set out in Annexes I to VI:

2.   With respect to vehicles which do not comply with the requirements laid down in this Directive, and on grounds relating to the subject-matter of this Directive, Member States:

3.   With respect to new vehicles which do not comply with the requirements laid down in this Directive, and on grounds relating to the subject-matter of this Directive, Member States:

No Member State may refuse registration, or prohibit the sale, entry into service or use of tractors on grounds relating to the parts and characteristics listed in Article 2(1) if these satisfy the requirements set out in Annexes I to VI.

The amendments necessary to adapt to technical progress the requirements of Annexes I to VI, apart from those set out at points 1.1 and 1.4.1.2 of Annex VI, shall be adopted in accordance with the procedure referred to in Article 20(3) of Directive 2003/37/EC.

Member States shall communicate to the Commission the text of the main provisions of national law which they adopt in the field covered by this Directive.

(1)  It is not necessary to establish an axle limit for vehicle categories T3 and T4,3, as they have by definition limitations on the maximum permissible laden and/or unladen mass.

1.   SHAPE AND DIMENSIONS OF THE SPACE FOR MOUNTING REAR REGISTRATION PLATES

The space for mounting shall comprise an even or virtually even rectangular surface with the following minimum dimensions:

The choice must take account of the dimensions in force in the Member States of destination.

2.   LOCATION OF THE SPACE FOR MOUNTING AND THE FIXING OF THE PLATES

The space for mounting shall be such that, after correct fixing, the plates shall have the following characteristics:

The centre of the plate may not be further to the right than the plane of symmetry of the tractor.

The left lateral edge of the plate may not be further to the left than the vertical plane parallel to the plane of symmetry of the tractor and tangent to the point where the cross section of the tractor is at its widest.

2.2.   Position of the plate in relation to the longitudinal plane of symmetry of the tractor

2.3.   Position of the plate in relation to the vertical plane

The plate shall be vertical within a tolerance of 5°. However, where the shape of the tractor so requires, it may be inclined to the vertical:

2.5.   Determination of the height of the plate from the ground

The heights given in points 2.3 and 2.4 shall be measured with the tractor unladen.

1.   The warning device must bear the EC approval mark prescribed by Council Directive 70/388/EEC of 27 July 1970 on the approximation of the laws of Member States relating to audible warning devices for motor vehicles (1).

2.   Characteristics of the audible warning device when fitted to the tractor

When a tractor is type approved, the characteristics of the warning device fitted to that type of tractor shall be tested as follows:

The sound level of the tractors referred to in Article 1 of this Directive, when measured under the conditions set out in this Annex, may not exceed the following levels:

The noise emitted by tractors shall be measured by means of a sound-level meter of the type described in Publication 179, 1st Edition (1965) of the International Electrotechnical Commission.

Measurements shall be made on unladen tractors in a sufficiently silent and open area (ambient noise and wind noise at least 10 dB (A) below the noise being measured).

This area may take the form, for instance, of an open space of 50 metres radius having a central part of at least 20 metres radius which is practically level; it may be surfaced with concrete, asphalt, or similar material and may not be covered with powdery snow, tall grass, loose soil or ashes.

The surface of the test track shall be such as not to cause excessive tyre noise. This condition applies only to measurement of the noise made by tractors in motion.

Measurement shall be carried out in fine weather with little wind. No person other than the observer taking the readings from the apparatus may remain near the tractor or the microphone, as the presence of spectators near either the tractor or the microphone may considerably affect the readings from the apparatus. Marked fluctuations of the pointer which appear to be unrelated to the characteristics of the general sound level shall be ignored in taking readings.

1.4.1.   Measurement of noise of tractors in motion (for type-approval).

At least two measurements shall be made on each side of the tractor. Preliminary measurements may be made for adjustment purposes but shall be disregarded.

The microphone shall be situated 1,2 metres above ground level at a distance of 7,5 metres from the path of the tractor’s centre line, CC, measured along the perpendicular PP’ to that line (figure 1).

Two lines AA’ and BB’, parallel to line PP’ and situated respectively 10 metres forward and 10 metres rearward of the line, shall be marked out on the test track. Tractors shall approach line AA’ at a steady speed, as specified below. The throttle shall then be fully opened as rapidly as practicable and held in the fully opened position until the rear of the tractor (1) crosses line BB’; the throttle shall then be closed again as rapidly as possible.

The maximum sound level recorded shall constitute the result of the measurement.

1.4.1.1.   The test speed shall be three-quarters of the maximum speed which can be attained in the highest gear used for road movement.

1.4.1.2.1.   To take account of inaccuracies in the measuring instruments, the result obtained from each measurement shall be determined by deducting 1 dB (A) from the meter reading.

1.4.1.2.2.   Measurements shall be considered valid if the difference between two consecutive measurements on the same side of the tractor does not exceed 2 dB (A).

1.4.1.2.3.   The highest sound level measured shall constitute the test result. Should that result exceed by 1 dB (A) the maximum permissible sound level for the category of tractor tested, two further measurements shall be made. Three of the four measurements thus obtained must fall within the prescribed limits.

Measuring positions for tractors in motion 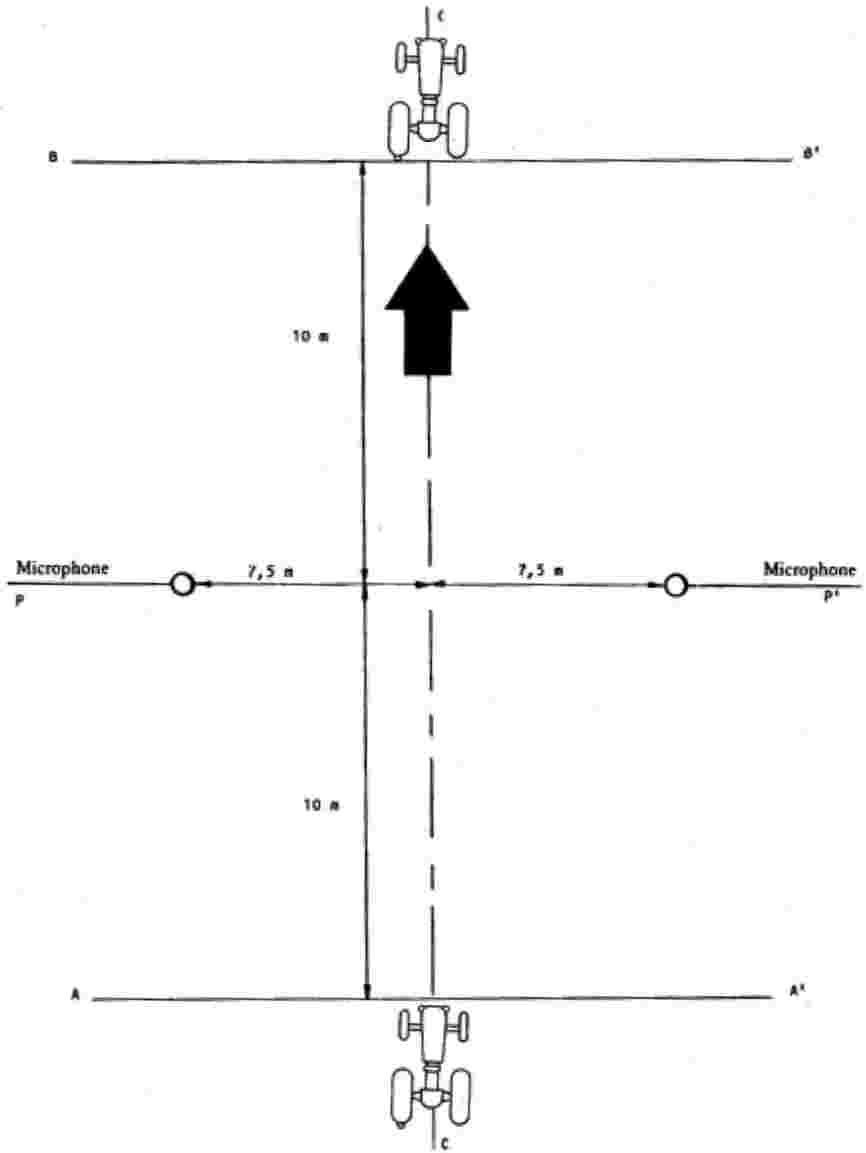 1.4.2.   Measurement of noise with tractor stationary (not for type-approval, but must be recorded).

Measurements shall be made at point X (shown in figure 2) at a distance of 7 metres from the nearest surface of the tractor.

The microphone shall be situated 1,2 metres above ground level.

At least two measurements shall be made.

The engine of a tractor without a speed governor shall be run at three-quarters of the rpm speed at which, according to the tractor manufacturer, it develops its maximum power. The rpm speed of the engine shall be measured by means of an independent instrument, e.g. a roller bed and a tachometer. If the engine is fitted with a governor preventing the engine from exceeding the speed at which it develops its maximum power, it shall be run at the maximum speed permitted by the governor.

Before taking any measurements, the engine shall be brought to its normal running temperature.

All sound-level readings recorded shall be given in the report.

The method used to calculate the engine power shall also be shown where possible. The state of loading of the tractor must also be given.

The measurements shall be considered valid if the difference between two consecutive measurements on the same side of the tractor does not exceed 2 dB (A).

The maximum figure recorded shall constitute the result of the measurement. 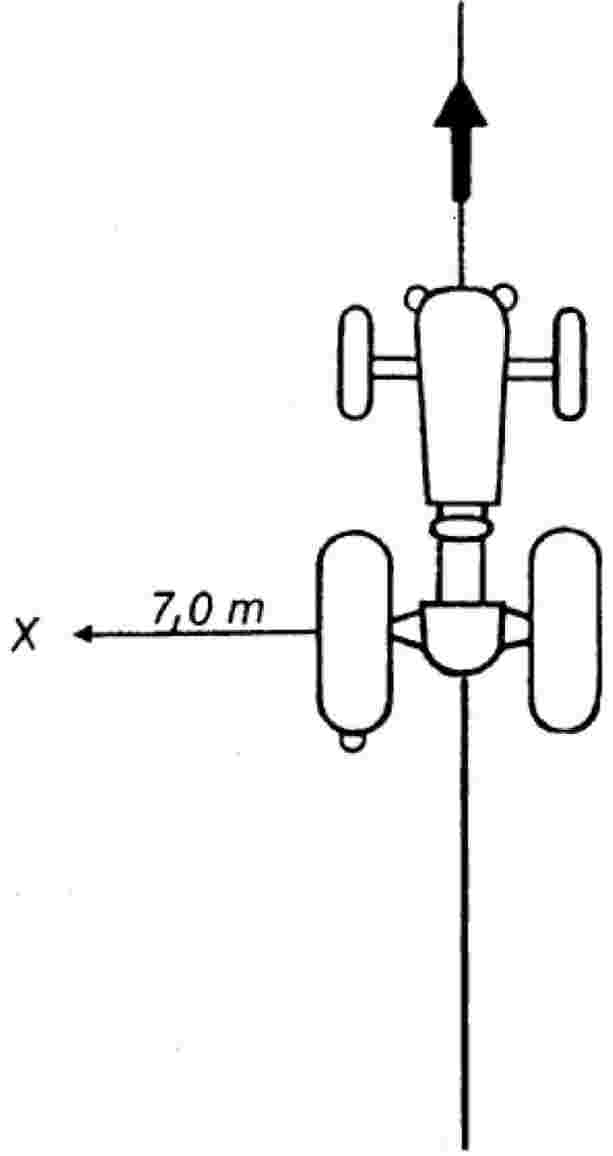 2.1.   If the tractor is fitted with a device designed to reduce the exhaust noise (silencer), the requirements of this Item 2 shall apply. If the inlet of the engine is fitted with an air filter which is necessary in order to ensure compliance with the permissible sound level, the filter shall be considered to be part of the silencer, and the requirements of this Item 2 shall also apply to that filter.

The exhaust tailpipe must be positioned in such a way that the exhaust gases cannot penetrate inside the cab.

2.2.   A drawing of the exhaust system must be annexed to the tractor type-approval certificate.

2.3.   The silencer must be marked with a reference to its make and type which is clearly legible and indelible.

2.4.   The use of fibrous absorbent material is permitted in the construction of silencers only if the following conditions are fulfilled:

(1)  If the tractor includes a trailer, this shall not be taken into account in determining when line BB’ is crossed.

List of time-limits for transposition into national law and application

if the liquid-fuel tanks, ballast weights and permissible sound levels of that type of tractor or tractors comply with the provisions of this Directive.

if these tractors meet the requirements of Directive 74/151/EEC, as amended by this Directive.

‘1.   With effect from 1 January 2007, with respect to vehicles which comply with the requirements laid down respectively in Directives 74/151/EEC, 78/933/EEC, 77/311/EEC and 89/173/EEC as amended by this Directive, Member States shall not, on grounds relating to the subject-matter of the Directive concerned:

2.   With effect from 1 July 2007, with respect to vehicles which do not comply with the requirements laid down respectively in Directives 74/151/EEC, 78/933/EEC, 77/311/EEC and 89/173/EEC as amended by this Directive, and on grounds relating to the subject-matter of the Directive concerned, Member States:

3.   With effect from 1 July 2009, with respect to vehicles which do not comply with the requirements laid down respectively in Directives 74/151/EEC, 78/933/EEC, 77/311/EEC and 89/173/EEC as amended by this Directive, and on grounds relating to the subject-matter of the Directive concerned, Member States: