In cooperation with the European Parliament (2),

Whereas it is important to adopt measures with the aim of progressively establishing the internal market over a period expiring on 31 December 1992; whereas the internal market shall comprise an area without internal frontiers in which the free movement of goods, persons, services and capital is ensured;

Whereas the technical requirements which vehicles must satisfy pursuant to national laws relate inter alia to the side guards of motor vehicles and their trailers;

Whereas these requirements differ from one Member State to another; whereas it is therefore necessary that all Member States adopt the same requirements, either in addition to, or in place of, their existing rules in order, in particular, to allow the EEC type-approval procedure which was the subject of Council Directive 70/156/EEC of 6 February 1970 on the approximation of the laws of the Member States relating to the type-approval of motor vehicles and their trailers (4), as last amended by Directive 87/403 /EEC (5), to be introduced in respect of each type of vehicle;

Whereas, in order to increase road safety, it is necessary to fit side guards to all vehicles in higher weight categories in order to offer unprotected road users (pedestrians, cyclists, motorcyclists) efficient protection against the risk of falling under the sides of such vehicles;

Whereas, for practical reasons, it is felt necessary to provide for different periods of application for new type-approvals and for all new vehicles;

Whereas the approximation of the national laws relating to motor vehicles includes the mutual recognition by the Member States of the checks carried out by each of them on the basis of common requirements,

For the purposes of this Directive, ‘vehicle’ means any motor vehicle in categories N2 and N3 and trailer in categories 03 and 04, as defined in Annex 1 to Directive 70/156/EEC, designed for use on the road, with or without bodywork and with a maximum design speed exceeding 25 km/h.

1.   No Member State may, on grounds relating to lateral protection, refuse to grant EEC type-approval or national type-approval in respect of a vehicle if such vehicle meets the requirements set out in the Annex.

2.   No Member State may, on grounds relating to lateral protection, refuse or prohibit the sale, registration, entry into service or use of a vehicle if such a vehicle meets the requirements set out in the Annex.

A Member State which has granted EEC type-approval shall take the measures necessary to ensure that it is informed of any modification to a part or characteristic referred to in the Annex. The competent authorities of that Member State shall determine whether fresh tests should be carried out on the modified type and a fresh report drawn up. Where such tests reveal that the requirements of this Directive have not been complied with, the modification shall not be authorized.

2.   With effect from 1 May 1991 Member States may prohibit the first entry into service of vehicles of which the lateral protection devices do not comply with the provisions of this Directive.

The amendments necessary in order to adapt the requirements of the Annex so as to take account of technical progress shall be adopted in accordance with the procedure laid down in Article 13 of Directive 70/156/EEC.

1.   Member States shall bring into force the provisions necessary in order to comply with this Directive by 30 October 1989. They shall forthwith inform the Commission thereof.

2.   Member States shall communicate the main provisions of national law which they adopt in the field covered by this Directive to the Commission.

2.   Lateral protection provided by a specific device (side guard)

3.   By derogation from the above provisions, vehicles of the following types need comply only as indicated in each case:

4.   If the sides of the vehicle are so designed and/or equipped that by their shape and characteristics their component parts together meet the requirements of point 2, they may be regarded as replacing the side guards.

(1)  This Directive does not prevent any country from having additional requirements for the vehicle parts forward of the front wheels and rearward of the rear wheels. 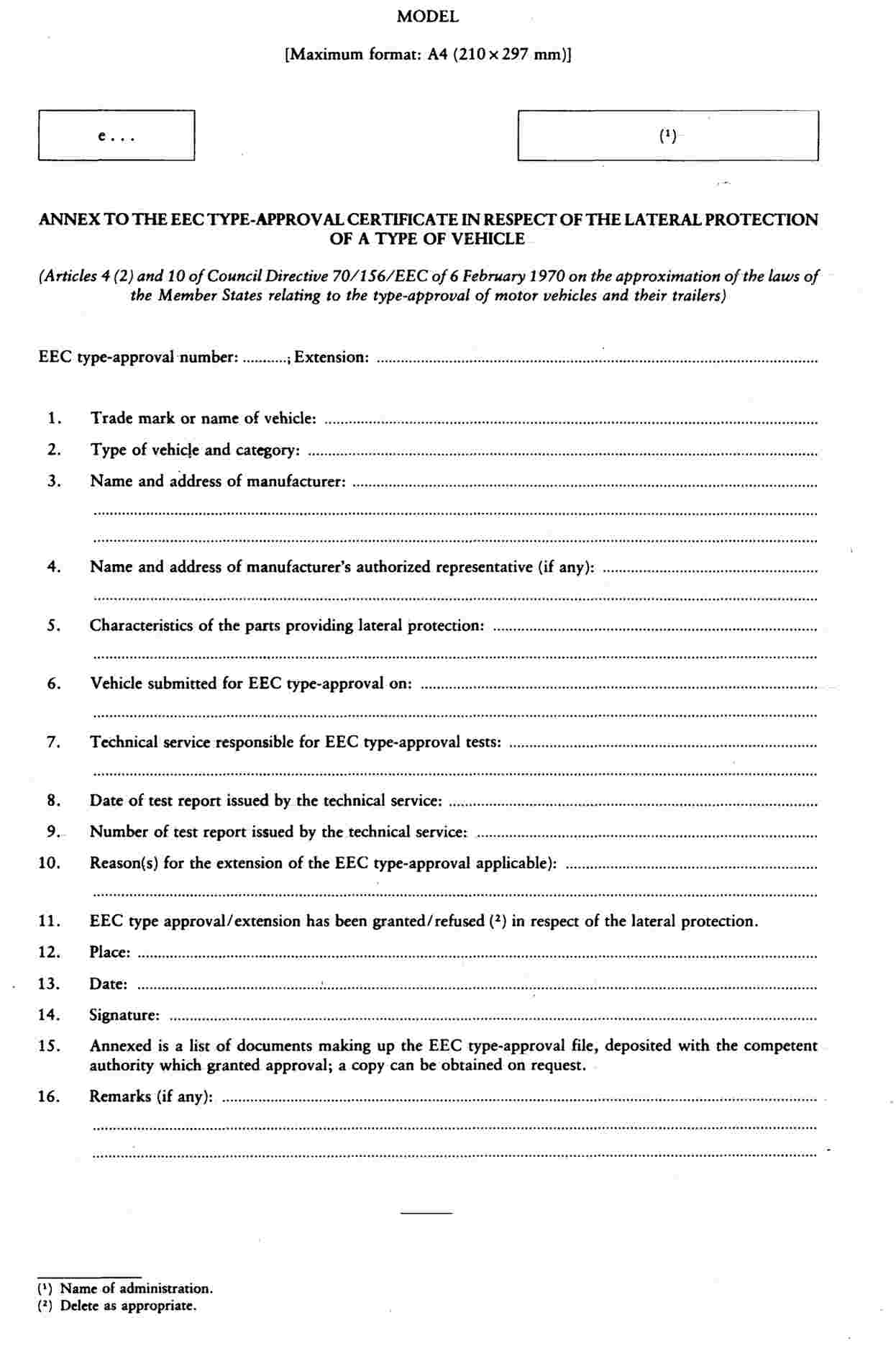 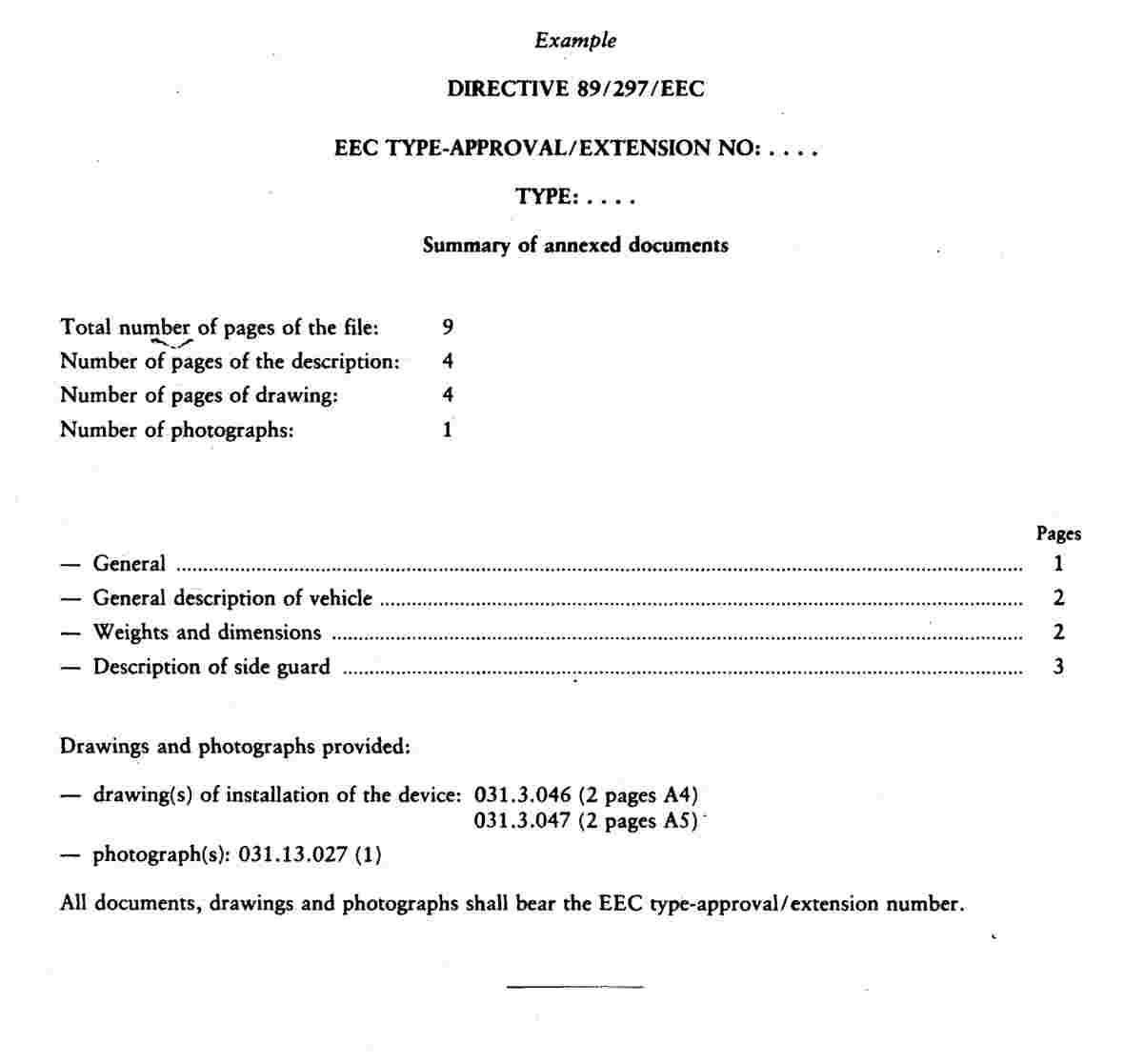